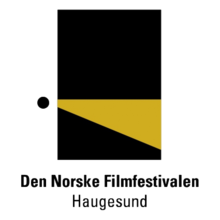 Den norske filmfestivalen (The Norwegian International Film Festival) is an annual film festival in Haugesund , Norway . The festival dates back to 1973 and is held in August.

In 1985 the Amanda was introduced as a Norwegian film award. The prize is awarded annually during the festival in various film categories. The Amanda is a sculpture by the Norwegian sculptor Kristian Kvakland , it is 30 centimeters high and weighs 2.5 kilograms.

The festival's patron is Crown Prince Haakon of Norway and Liv Ullmann is the honorary president .