This article mainly deals with the origin, representation and pronunciation of the letter E. The different meanings of this character can be found under E (disambiguation) .
Ee

E or e (pronounced: [ ʔeː ]) is the fifth letter of the classical and modern Latin alphabet . He is a vowel . The letter E has an average frequency of 17.39% in German texts. This makes it the most common letter in German texts as well as in various European languages. 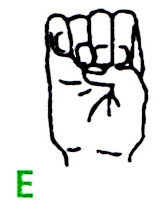 E in the finger alphabet

The finger alphabet for the deaf and hard of hearing represents the letter E, with the bent thumb in front of the palm and the remaining fingers touching the thumb with the fingertips.

In the Protosinaite script , the E represented a person - possibly standing. In the Phoenician alphabet this symbol was highly abstracted and was given the name He . The Phoenicians, the letter had the phonetic value [⁠ h ⁠] .

The Greeks adopted the heh as an epsilon . When they took over, however, they changed the sound value, as the vowel-rich Greek language , written only with characters for consonants, would have resulted in too many ambiguities. The Greeks used to represent the letter, [⁠ e ⁠] to write. Initially oriented to the left, the letter was mirrored when the writing direction changed from left to right.

The Etruscans took over the early Greek Epsilon, without modifying it, and used it also to [⁠ e ⁠] to write. The letter was adopted by the Romans, but later adapted to the Greek appearance.

Next to it in the sound sequence he , especially in the final sound :

An “e” after an “i” is mostly used in German to denote the long vowel [ iː ]: “Kn ie ”, “V ie h”. In some cases it is spoken separately (two syllables), for example in the plural forms “die Knie” [kniːə] (also [kniː]), “industries” [-iːən]. Here, when the expansion e and plural e meet in the spelling, one of them has been deleted. In “shouted”, “spit” and so on, the “e” is not or only weakly articulated, depending on the language region. In the interior of foreign words, "i" and "e" are usually spoken separately, especially at syllable and morpheme boundaries such as "Orient", "Pietät", "industrial" and so on. The pronunciation of foreign words is different: “share” [-iə], but “part” [-iː].

In Middle High German was he who, especially in the southern part of the German-speaking world, still in a falling diphthong dialect exists: "loving" [liəb], "smell" [riəçən] ...

The sequence of "e" and "i" (in proper names also "y") is usually a descending diphthong : "wide", "tire" [-aɪ-]. However, if there is a syllable or morphemic boundary between them, the vowels are spoken separately: "contain", "reincarnation", "create" [-eˈi-].

An “e” before a “u” usually denotes the diphthong ([ ɔʏ ]): “nine”, “rheumatism”. Here, too, there is the hyphenation at the syllable boundary: "overflowing", "muse-um".

Today an e is used after an a , o or u for the umlaut letters ä, ö and ü if, for example, there are no letters for umlauts on the keyboard or in the character set , as well as in crossword puzzles and other letter games.

The ligatures in Unicode all have their own characters, often at various code points depending on the language. The old German superscript "ͤ" can be set with U + 0364 COMBINING LATIN SMALL LETTER E ( combining Latin small letter e , in the Unicode block combining diacritical characters - &#x0364; among other things, following the respective letter).

“... an unoriginal, therefore fluctuating, indefinite vowel, which has spread too much in our language and has impaired its woolen appearance. (...) Such monotony is hardly possible in other tongues, it was also formerly foreign to the German one. "

The different meanings of this symbol can be found under E (disambiguation) .