This article deals with the Latin letter C. For other meanings, see C (disambiguation) .

C or c (pronounced: [ t͡seː ]) is the third letter of the classical and modern Latin alphabet . It initially referred to the velar plosives / k / and / g / (the latter has been represented by the newly created G since the 3rd century BC ); as a result of since the late Latin testified assibilation before front vowel designated c in most Romanesque and many other languages also ( post ) alveolar affricate (ital. [⁠ ʧ ⁠] , dt. tschech. [⁠ ʦ ⁠] ), or a dental or alveolar fricative (French. engl. [⁠ s ⁠] , span. [ θ / s ]). The letter C has an average frequency of 3.06% in German-language texts . 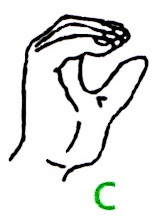 The finger alphabet for the deaf or hard of hearing represents the letter C , with the thumb and remaining fingers forming an open semicircle.

In most Romance languages as well as in the medieval and modern pronunciation of Latin and numerous words borrowed from it, c precedes consonants and trailing vowels (including / a /) for the voiceless velar plosive / k /, in front of original front tongue vowels e , i (also before lat. ae , oe , y ), however, for a sibilant (depending on the language and speech level a affricate / ⁠ ʧ ⁠ / , / ⁠ ʦ ⁠ / or a pure fricative / s /, / ⁠ ʃ ⁠ / , / ⁠ .theta ⁠ / ;. cf. Romanesque Palatalisierung ). The distribution of these allophones according to the following vowel is occasionally reproduced in language-specific phonetic transcription using the series ka - ce / ze - ci / zi - ko - ku (so-called Ka-ze-zi-ko-ku rule) or summarized as a motto of the following kind: “Before a, o, u say c like k , before e and i say c like z .” Where such a sibilant before a rear consonant like / a /, / o /, / u / (or a later developed front tongue vowel , for example French [y] <Latin / u /), it is often denoted by ç , z , or (in Italian) the digraph ci . Conversely, for the Velar there occurs before the front vowel k , in French regularly qu , in Italian ch . In addition, the letter c is partly replaced by z or k , e.g. B. in today's German with Latin loan words: circus instead of circus .

Outside of Italian , the digraph ch also stands for a sibilant in many Romance languages, and in German and Gaelic for a velar or palatal fricative. The combination ck is often used in German as a variant of k to indicate that the preceding vowel is pronounced briefly; In northern German place names and family names, however, there is sometimes a ck after long vowels (e.g. Mecklenburg ( ˈmeː -), Buddenbroock); the Trigraph sch represents the sound [ ʃ ] represents (as in Sch ule ).

The original form of the letter, which comes from the Protosinaitic script , represents a foot. This meaning was retained in the Phoenician alphabet . The letter was named Gimel (camel) and had the sound value [g]. The Greeks adopted the letter as gamma . At the beginning, the gamma was written in a form that looked like a roof (similar to the later lambda ). Up until the classical era, the gamma continued to develop into Γ. One of the reasons for this was probably the change in writing direction from right-to-left to left-to-right, as well as the need to change the writing tools for writing on organic materials.

When the Etruscans, the early Greek alphabet took over, they had no use for the Gamma, as voiced in Etruscan plosives like [g] did not occur. However, the Etruscan language had three k-sounds. The Etruscans therefore changed the sound value of the letter in order to reproduce the voiceless plosive [k] before [e] or [i].

With the sound value, the character C then migrated into the Latin alphabet and was originally used by the Romans, who differentiated between the Tenuis K and the Media G , for the sounds [g] and [k], more precisely, for the syllables [ ge]; [gi] and [ke]; [ki] set. Even if in archaic times in the Latin writing practice three differently colored [k] sounds from their subsequent sounds were not consistently distinguished in terms of characters, a differentiation did set in, namely C before [e], [i], K before [a ] and Liquiden , Q before [o], [u], of which the former is also responsible for our G today.

Already in the 4th century BC This process came to a close by placing the letter Q only in front of the consonant [u], while the letter K began in the 3rd century BC. Chr. Only in formulaic abbreviations, such as Kal. = Kalendae and the brand K. = Kalumniator. Both letters have been displaced in favor of the C.

But now the [g] sound was attached to the character C and according to Plutarch (Quest. Rom. 54) it was 230 BC. The writing school operator Spurius Carvilius Ruga , who took the G out of the C by adding a dash and moved it to the place that the [ts] sound, i.e. the Greek Zeta, our Zett, occupied in Greek. The character C was retained as a [ge] sound only in the abbreviations C. = Gaius and CN. = Gnaeus.

It is interesting that the Romans did not put the new letter, i.e. the connection of the character C with cauda (tail) = G with the sound [g], at the end of the alphabet, as happened later with the Greek Y and Z , but instead the place that belonged to the Zett according to the Greek alphabets. After the voiced [z] sound, which was in the zeta position in the alphabet, i.e. in the 7th position and represented by the character 'I', had become R (fesiae → feriae), the character was no longer necessary and the letter was written by the Censor Appius Claudius Caecus in 312 BC. Chr. (Marc. Capella: 1.3) repaid. In addition, Greece had not yet been conquered and Greek scholarship was not yet at home in Rome. This could be an indication that a gap was felt there because the letters still had the old Phoenician number meaning in Rome.

In late Latin from the 5th century AD, the [k] before a light vowel became [ts]. This pronunciation became the standard in medieval Latin, it is the reason why the C has different sound values ​​today. In Romance languages , this development was in part continued; the C there also has the sound values ​​[tʃ], [s] or [θ].

Since we, like the Greeks and Slavs , express the tenuis of the guttural sound with K, the C, taken from the Latin alphabet, is completely superfluous, so the Gothic and Old Norse script is missing, the Slavs use it for S, the Poles and Bohemia but remains indispensable for Z. (…) as long as we do not assume a simple symbol for the kehlaspirata, such as the Goths the large X, C in CH. (from Grimm's dictionary )