Karl Gustav Adolf Harnack , from 1914 von Harnack (* 25 April July / 7 May  1851 greg. In Dorpat , Livonia Gouvernement ; †  10 June 1930 in Heidelberg ) was a German Protestant theologian and church historian specializing in the history of dogma . He also worked as a science organizer in Prussia .

Adolf Harnack came from the world of Baltic German Lutheranism . His father Theodosius Harnack was a Luther researcher in Dorpat and Erlangen . His twin brother Axel became a mathematician, his younger brother Erich a pharmacologist and his younger brother Otto a literary scientist.

Ernst von Harnack's son Ernst von Harnack (1888–1945), who was executed by the National Socialists for participating in the assassination attempt of July 20, 1944 , was involved in the SPD . The youngest son Axel von Harnack (1895–1974) was a historian and philologist and worked as a librarian. The daughter Agnes von Zahn-Harnack (1884–1950) was a prominent representative of the bourgeois women's movement and a member of the German Democratic Party . She was married to the ministerial official Karl von Zahn . The daughter Elisabet von Harnack (1892-1976) was an important social worker.

Grave of Adolf von Harnack in the old St.-Matthäus-Kirchhof Berlin

Adolf Harnack attended grammar school in his home town of Dorpat, where he graduated from high school in 1868. He began studying theology at Dorpat University in 1869 and joined the Livonia Corporation . From autumn 1872 he studied Protestant theology in Leipzig , received his doctorate in 1873 and qualified as a professor there in 1874. The University of Leipzig appointed him extraordinary professor in 1876. He later worked as a full professor of church history in Gießen (1879–1886), Marburg (1886–1888) and the Berlin Friedrich Wilhelms University (1888–1924). In 1890 he became a full member of the Royal Prussian Academy in Berlin. Since 1897 he was a corresponding member of the Bavarian Academy of Sciences .

As a young lecturer - influenced by Albrecht Ritschl's theology - he took a critical perspective on the history of Christian dogma . Harnack's understanding of Protestantism was that of Reformation and Revolution : Reformation of the doctrine of salvation and revolution against the authority of the Catholic Church , against its hierarchical apparatus with its own ecclesiastical legal order and against its religious order. Jesus pushed aside the cultic, which was valid in Judaism . He did not rely on cultic purification and sanctification, but only on the human soul. The moral action of the individual, his works of love would decide whether the individual enters a kingdom of God or not. Roman Catholic and Orthodox Christianity are similar to the cult of Judaism. Only Protestant Christianity restored the message of Jesus in its purity.

His three-volume textbook on the history of dogma (1886–1890; several expanded new editions) is considered his most important theological publication. This work met with strong opposition from the conservatives and the Evangelical Upper Church Council, who wanted to prevent his appointment to Berlin. The matter was then decided by Wilhelm II in 1888, in the “ three emperor year ”, with the support of Bismarck . However, Harnack was not given permission to examine theological examinations throughout his life. Harnack was often at the center of ecclesiastical political conflicts such as the apostolic dispute and the Bible-Babel dispute .

In the Wilhelmine Empire Harnack taught at the University of Berlin. His sixteen lectures on The Essence of Christianity , which he gave in the winter semester of 1899/1900, were attended by more than 600 students from all faculties . However, these lectures were also the cause of intense criticism from conservative theologians, namely from Theodor Zahn . and Eduard Rupprecht . As early as 1895, the conservative theology professor Martin von Nathusius from Greifswald had criticized Harnack's theological point of view, which in his opinion was too closely related to this world. In his main work Das Wesen des Judentums , published in 1905, Leo Baeck critically examined the positions of Harnacks, but without mentioning his name.

Harnack as a science organizer

Harnack maintained a network of contacts with the scientists of his time and with his students. During his time in Leipzig he found friends with Julius Kaftan , Emil Schürer , Wolf Graf von Baudissin and Oscar von Gebhardt . In 1874 he founded a Church History Society in Leipzig . This group of friends included Caspar René Gregory , Martin Rade , Wilhelm Bornemann , Friedrich Loofs and William Wrede .

Harnack founded the Theologische Literaturzeitung together with Emil Schürer in 1876 , together with Oscar von Gebhardt in 1882 the series of texts and investigations on the history of early Christian literature , and in 1886/1887 the magazine Christian World .

When he entered the Prussian Academy of Sciences in 1890, he began a major project with the edition of a critical edition of the Greek Christian writers of the first three centuries . The Academy appointed the Church Fathers Commission with Harnack as its leader. From the outset, the commission was multidisciplinary; Classical philologists, ancient historians and patristicians worked together. The edition was calculated to be around 50 volumes that should appear within 20 years; extensive research on this should appear in texts and studies . As an inventory for this work, Harnack wrote the history of early Christian literature up to Eusebius . The work of the Church Fathers Commission led to an upswing in patristicism. This work also brought him into close contact with Theodor Mommsen .

Harnack was involved in the lively women's movement around 1900. He belonged with Wilhelm Dilthey , Minna Cauer and Hans Delbrück to the association founded by Helene Lange in 1893 for the organization of high school courses for women , which campaigned in principle for the right of women to study at university. Together with Empress Auguste Viktoria and the women's rights activists Helene Lange and Gertrud Bäumer , he was committed to the major reform of the girls' education system in 1908. As a university teacher, he supported the first female students after women in Prussia had been allowed to attend universities since the 1890s. Among them was the women's rights activist Gertrud Bäumer.

For the 200th anniversary of the academy in 1900, Harnack wrote the four-volume history of the Royal Prussian Academy . He was also able to ensure that the Academy's commissions were given their own government-paid civil servant positions so that they could do continuous work and the members of the commissions could be relieved of organizational tasks. Harnack eventually became chairman of the academy himself.

In 1905 he became a part-time director general of the Royal Library .

Harnack was instrumental in founding the Kaiser Wilhelm Society for the Advancement of Science . From 1911 to 1930 he was its first president; at the same time he held a seat in the Senate. The structural approach, the establishment of institutes and research branches of this and the subsequent Max Planck Society to develop outstanding individuals with a high level of financial and content-related responsibility is often referred to as the Harnack principle - not to be confused with the Harnack principle .

Ceremony for the opening of the Royal Library in 1914 in the presence of Kaiser Wilhelm II , Harnack's keynote speaker as General Director 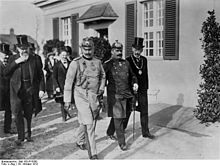 Harnack became a political advisor with a wide range of political contacts, including Chancellor Theobald von Bethmann Hollweg . In close cooperation with the reformers of the state bureaucracy , he took a middle line, focused on the balancing of interests through social reforms , conflict avoidance and consensus, and turned against a culture-fighting polarization and intensification of class conflicts .

His values ​​were bourgeois-liberal, aimed at a parliamentary-constitutional monarchy and thus stood - not untypical for the upper class - against authoritarian tendencies in the empire. Basically he assumed that society was capable of reform. His personality religion, which was critical of tradition, contained strong social ideals which he saw symbolized in the kingdom of God. He interpreted the inner-worldly vocation of a Christian as a duty of service to the community .

In foreign policy, Harnack was committed to an understanding between England and Germany, turned against Pan-German imperialism and advised moderation and compromise, but he also signed the Manifesto of 93 , in which, among other things, Germany's opponents of the war are insulted as liars and a (Mit -) Germany's responsibility for the start of the war is denied. Together with the historian Reinhold Koser, Harnack wrote the national appeal to the German people! by Wilhelm II on August 6, 1914. It invokes Germany's role as a victim, God's support (“God with us”) and the readiness for total struggle “to the last breath of man and horse”. Its cultural-Protestant national history included the willingness to secure German culture in the east through vassal states . Harnack interpreted the war defeat and the November Revolution of 1918/19 as a transition to democracy and socialism . Against the line of majority Protestantism, which was almost entirely anti-republican, the conservative republican campaigned decisively for social democracy in the Weimar Republic .

Harnack was also a political writer: In his Augustin , published in 1922, Harnack postulated his political-theological demand for a “new Augustinism ” in which “ reverence for God as the source of all high goods permeates human knowledge and attitudes , the true one Establishes freedom and creates a covenant of justice and peace ”. In this work, Harnack's gaze was directed towards a renewal of culture in the sense of a spiritual idealism to be deepened , but without being directed against modernity . About Oswald Spengler's book The Downfall of the West , which was popular at the time and which Harnack dealt intensively with after 1918, he wrote that it had to be "thrown overboard" with a single name: Augustin . Harnack received extensive praise for his writing Augustin from the poet Gerhart Hauptmann , with whom he had been in close contact for a time since 1909.

GDR postage stamp from 1950 with the portrait of Harnacks

Harnack received numerous awards, for example in 1902 he became a member of the Pour le Mérite order for science and the arts , of which he was Chancellor from 1923 to 1930. In 1904 Harnack was elected to the American Academy of Arts and Sciences and in 1907 as a corresponding member of the British Academy . He carried the title of "Royal Prussian Real Privy Councilor ". For his services he  was raised to the Prussian nobility on March 22, 1914 on the occasion of the opening of the new building of the Royal Library ( Unter den Linden 8) with a diploma from June 9, 1914. In 1925 he was awarded the Harnack Medal of the Kaiser Wilhelm Society and in 1926 the eagle shield of the German Empire . Since 1903 he was a corresponding member of the German Archaeological Institute . In 1928, Harnackstrasse in the planned Berlin-Dahlem science district was named after him - also because in 1910 he was a member of the Royal Commission for the division of the Dahlem domain .

The Max Planck Society awards the Adolf von Harnack Medal, originally donated in 1924, as the highest honor for special merits .

Harnack's pupils and students included several generations of Protestant theologians, such as the church historian Ernst von Dobschütz (1870–1934) as well as Dietrich Bonhoeffer and, in the winter semester of 1904, the Marburg New Testament scholar Rudolf Bultmann .

Harnack's theological works are often characterized by a rejection of the Old Testament or by a clear anti-Judaism , which is why Pope Benedict XVI. 2007 saw in him a theologian who wanted to carry out the legacy of the heretic Marcion (85-160), namely to break Christianity from the connection to the Old Testament .

Charlotte Knobloch , former president of the Central Council of Jews in Germany , classified Harnack's essay The Essence of Christianity as anti-Semitic . Adolf von Harnack, however, appeared as a vehement opponent of political anti-Semitism throughout his life.

The first of 49 publications in Texts and Studies

→ Main article : Texts and studies on the history of early Christian literature