Linseed is a redirect to this article. See also: linseed bin , Prussian measure.

Brown flaxseed with coin as a size comparison 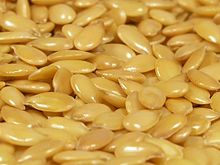 Depending on the variety, flax seeds have a brown or yellow shell, taste slightly nutty and contain around 40% fat ( linseed oil ). The polyunsaturated omega-3 fatty acid alpha-linolenic acid makes up about 50% of this. Linseed oil therefore has one of the highest concentrations of omega-3 fatty acids of all known vegetable oils. Other important ingredients are mucilage , linamarine , protein , lecithin ; also sterols , plastochromanol , vitamins B1 , B2 , B6 and E as well as nicotinic , folic and pantothenic acid .

According to the Food and Agriculture Organization FAO, around 3.2 million tons of flaxseed were harvested worldwide in 2018 . The main producers were Kazakhstan , Canada and Russia .

Flaxseed is used as a natural and over-the-counter laxative for constipation . The laxative - more precisely: stool-regulating - effect is based on the fact that the flaxseed skin contains mucilage that swells when water is absorbed . The fecal mass is also softened. The increase in volume associated with the swelling irritates the stretch receptors in the intestinal wall , so that the emptying reflex occurs. Flaxseed mucus can be taken as a morning roll cure or spread over the day to protect the gastric mucosa in the case of gastritis . There is some evidence that flaxseed mucus can also help prevent prostate cancer.

Flax seeds contain cyanogenic glycosides ( linustatin and neolinustatin ). After their conversion, these prussic acid precursors correspond to an amount of around 50 mg prussic acid per 100 g flaxseed. The low water content of the seeds, the acidic pH value in the stomach and the degradation by rhodanases should prevent poisoning if normal amounts are consumed. Any previous heating by baking, boiling or frying should also destroy the glycosides. However, according to recent information from the Swedish Livsmedelsverket (the Swedish national food authority), the consumption of crushed or ground flaxseed is not advised because there is insufficient evidence of the extent to which toxic substances are destroyed by heating. In a publication that comes European Food Safety Authority (EFSA - European Food Safety Authority (European Food Safety Authority)), which dealt with a variety of study results to the conclusion that due to the small available data of recent studies, a default chronic health-based guidance values of cyanogenic glycosides related to human and animal health could not be provided. A value of 20 μg / kg body weight for cyanides has been exceeded by up to 2.5 times in some studies for cyanogenic glycosides. It is unlikely that this excess would have a lasting impact on the health of the children and young adults examined.

Whole flaxseed is less intense than ground flax, because it often passes through the gastrointestinal tract in unchanged form . If, on the other hand, the seed coats are broken open by crushing, the mucilages, like the linseed oil , get out and develop their positive effects. In addition, flaxseed can only stimulate digestion if enough fluids are absorbed. Too little fluid intake can stick the mucus inside the intestine. In the worst case, an intestinal obstruction can develop. Crushed seeds have a stronger effect, but only last for a short time in the refrigerator, because when they are crushed, fatty acids are released that break down quickly. Flaxseed should not be used in the event of an obstruction of the intestine, narrowing of the esophagus, stomach or intestines, or acute inflammation in the gastrointestinal area.

Powdered linseed and so-called linseed cake (the press cake is a by-product of linseed oil production) are used for softening and pain-relieving pulpy compresses or as a hot pack for gallbladder colic and other diseases of the liver and bile. The water-soluble lignans contained in the linseed cake have antioxidant effects and are also used in medicine for the treatment of breast cancer.

There is some evidence that the consumption of flaxseed by pregnant women increases the risk of premature births.

Flaxseed is used in large quantities as an ingredient in food, mainly in baked goods and muesli . Large quantities are pressed into linseed oil, which is used as a high-quality edible oil, as a therapeutic agent and, above all, in technical applications. Linseed cake is fed to livestock or used as a fertilizer.

From a nutritional point of view, linseed oil is very valuable edible oil, as it contains more than 90% unsaturated fatty acids , which is also indicated by the iodine number 170–190. It polymerizes quickly, making it ideal for making oil paints . All flaxseed products should therefore be stored in dark, airtight containers.

The problem of genetically modified seeds

From 1996 to 2001, the genetically modified flax variety Triffid, which is resistant to certain herbicides, was approved in Canada . Despite the subsequent worldwide ban on cultivation and sales (or the lack of permits), genetically manipulated flaxseed in food was detected in the first controls in Germany in 2009, and evidence in other European countries followed. Large German retail chains then removed products that might contain contaminated flaxseed from their shelves.

As a result of the contamination of the flaxseeds imported from Canada with genetically modified seeds, many food producers no longer used flaxseed from Canada: prices collapsed and the Canadian flaxseed industry feared for its existence. The Canadian Flax Seed Association agreed with the EU as the most important buyer (70% of Canadian exports) mandatory tests for their products in order to be able to sell at least part of the harvests. Since then, the association has tried to get the problem under control through controlled cultivation, regular tests and appeals to farmers.