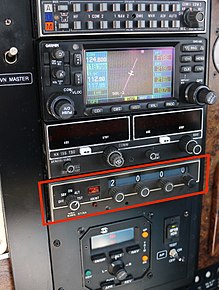 Transponder of a private aircraft with the code 2000 set

In air traffic, the transponder code (also known as Squawk  [ skw istk ] ) is a four-digit octal number (digits 0 - 7) that can be set by the pilot and that the aircraft transponder (TPX or XPDR) transmits when queried by the secondary radar of the ground station. The transponder code is displayed together with the radar echo on the radar screens of the air traffic control and is used in a flight information area for the unambiguous identification of an aircraft. The transponder has been part of the mandatory equipment of motor-powered aircraft since 2006.

The air traffic controller usually gives the transponder code to the pilot by radio. The pilot sets the four-digit sequence on the transponder. The transponder receives a query from a query transmitter (engl. Interrogator ), then it sends its code, altitude and also in instrument flight information, such as the flight number to the ground station, which feeds the data into a computing system, depending on the content of this query. More precisely: In the so-called LDB mode (Limited data block) , a transponder only transmits the transponder identifier and flight altitude , in FDB mode (Full data block) it also transmits position, speed over ground and flight plan . As a result, the pilot sees on his screen where the machine is flying, how high and also - processed by the system - how fast. The transponder code is therefore used to distinguish the individual aircraft on the controller's screen.

For flights in airspaces C and D, the transponder code is assigned to the aircraft by air traffic control via radio communication ; for instrument flights , the pilot receives his transponder code with the route clearance.

The Squawk 0000 cannot be used in older systems due to technical inadequacies.

In some regions, the flight information services and air traffic control offices assign fixed group codes for recorded VFR flights on the respective frequency. Several aircraft are assigned an identical code, for example:

The codes 7500, 7600 and 7700 are used to transmit information about the nature of an air emergency. Common mottos are added:

During the Second World War, the British developed an electronic system for recognizing friends and foes for their air defense . This is because German long-range night fighters often chased British bombers back to England in order to shoot them down shortly before landing. The English air defense now had the problem of telling their own and German machines apart. The secret system was code-named Parrot (English for "parrot"). When pilots asked the crew to switch on the "original transponder" in order to identify them, they transmitted: "Squawk your parrot", something like: "Let your parrot screech!"