A control zone ( English zone control as international CTR for controlled traffic region hereinafter) is to the ground reaching air space in the immediate vicinity of an airfield , the air traffic from one air traffic controller is controlled.

Control zones in Germany are legally classified as Category D (CTR) airspaces . Class A , B or C airspaces can also be found internationally . In Germany, at least one so-called local transport area will also be set up around the CTR .

Control zone of Stuttgart Airport (reddish) with compulsory reporting points (yellow), in the middle the runway (blue). The CTR extends to 3500 feet MSL, about 1066 m above sea level. NN 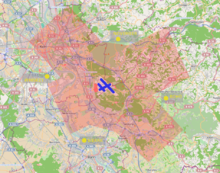 Cologne / Bonn Airport has a cross-shaped control zone due to the intersecting runways (blue). The upper limit here is 2500 feet MSL or 762 m above sea level. NN

The lateral extension of a control zone depends on the local requirements. Many are rectangular in shape, about 10–15 km wide and 25–35 km long. But also circular shapes, combinations or irregular polygons occur, depending on the arrangement of the runways of the airfield and the resulting flight paths for incoming and outgoing traffic.

In accordance with the ICAO standard , control zones extend up to at least 1500  ft AGL ( above ground level ). The upper limit is always given as the height above sea level (MSL, mean sea level). In Germany, the highest control zones reach up to 4500 ft MSL, for example at Memmingen Airport .

The boundaries of a control zone are shown on the officially valid visual flight maps.

Control zones at large airports are "active" around the clock, i.e. they are valid under aviation law. In many cases, control zones at smaller or military airfields are only activated when required. These are marked with the addition “HX” on aeronautical charts (for “not fixed in time”); a pilot must find out about the status from a competent authority before flying through. If a control zone is not active, the airspace structure of its surroundings applies there.

A flight under visual flight rules into a control zone is only permitted with the approval of the responsible air traffic controller and is usually done via mandatory reporting points shown on the visual flight cards . These often coincide with distinctive ground features that are easily recognizable from the air (for example motorway junctions or conspicuous buildings) and are usually named after the direction in which they are located, e.g. B. "WHISKEY" (see ICAO alphabet ) is a compulsory reporting point , which is approximately west of the airfield.

Within the control zone , every pilot on the tower frequency must be ready to listen, as the traffic control is incumbent on the air traffic controller , who assigns flight paths and altitudes to the individual aircraft.

If conditions 1 or 2 are not met, individual departures and approaches can still be carried out through the control zone with clearance from air traffic control in accordance with special visual flight rules .

Since December 2014, a flight plan has been formally required for every entry into a control zone . In the case of flights according to visual flight rules, however, the transmission of the flight data when the radio contact is established is regarded as a sufficient air-filed flight plan (AFIL-FPL) .

The absolutely necessary contact of the aircraft with the tower via radio communication usually excludes the entry of all aircraft that for technical reasons do not have an aircraft radio device with them, for example paragliders and hang gliders .