The VEB Barkas works Karl Marx city was founded in 1958 vehicle and engine plant of IFA in today Chemnitz . In addition to the Barkas small vans , the engine for the Trabant and later for VW short engines were also produced. After the fall of the Berlin Wall , the company developed into a major manufacturer of engines and other vehicle components within Volkswagen Sachsen GmbH .

The Chemnitz location has a long tradition in vehicle construction, among other things, Auto Union AG was founded here in 1932 . After the Second World War , only a small part of the production facilities, which were destroyed by bombs and dismantled by the Soviets, were put back into operation. This included the halls of an engine factory, where - as part of the Saxon Construction Works (SAW) - the regeneration and manufacture of spare parts and the production of various engines as reparations began in 1947 . In 1949 production of the two-cylinder two - stroke engine for the DKW F8 was resumed. The VEB Motorenwerk Chemnitz was formed from this plant in 1950 . Chemnitz was renamed Karl-Marx-Stadt in 1953 . The company was now also commissioned to produce the three-cylinder two-stroke engine for the IFA F9 and the engines for the Framo small transporters from Hainichen. The associated gearboxes were also manufactured here. As early as 1953, the production of three-cylinder engines was relocated to Eisenach . Since then, production has included the engines and transmissions for the IFA F8 and its successor, the P70, as well as stationary two-stroke engines and more.

Expansion of the company

Engine compartment of the Trabant 601

The production of vehicle parts and engines - especially for the Trabant - had priority in the new large company . In addition, various one- and two-cylinder two-stroke engines were produced for use in agriculture and forestry.

From 1970 to 1977 the Barkas works were placed under the management of the IFA combine for motor vehicle parts, in which a total of eleven companies were united, making the production range very diverse. The network of the Barkas factories became even more extensive in 1972, when numerous supplier companies were assigned to the factory in the course of the nationalization of private medium-sized businesses.

In 1978 the Barkas works became a company and in 1984 it became the parent company of the passenger car company. Among other things, the company was responsible for the Scientific-Technical Center (WTZ) for the automotive industry . At that time, the production of the Barkas B 1000 van only played a subordinate role for the company. Its annual numbers remained in the four-digit range, and there were hardly any further developments. 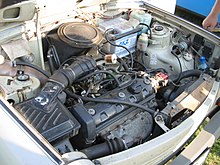 Engine compartment of the Trabant 1.1

A milestone was the conclusion of a license agreement with VW in 1984, which provided for the production of VW engines for the Wartburg 1.3 , Trabant 1.1 and Barkas B 1000-1 . The starting point was an offer from VW to the GDR's deputy foreign trade minister, Gerhard Beil , to sell used production systems for the alpha engine series. In addition, it was agreed that the Barkas works should produce the 1.3-liter short engine of the VW type EA 111 for VW. The contract was concluded without involving the Politburo , which was very unusual. Günter Mittag , however, stood behind this project; after years of ignorance, he had now come to the conclusion that two-stroke engine construction for cars could no longer go on like this. The cooperation with Volkswagen created unknown challenges for the Barkas works. With great effort and a lot of political tailwind, it was possible to create modern production facilities for up to 1,730 engines a day, but also a shortage of labor caused difficulties. More than 5000 employees were directly or indirectly involved in the manufacture of these engines when series production began in 1988. Up to 1991, 200,000 short engines were built, which were installed in the Wartburg from 1988, later also in the Trabant and Barkas. On December 4, 1989, the engine delivery to VW began. At that time, the Barkas works had 7,281 employees. In addition to Karl-Marx-Stadt, the locations also included Dresden , Hainichen , Frankenberg and Scheibenberg .

Due to the already existing and fruitful cooperation with VW, at the turn of 1989/1990 the Barkas-Werke did not suffer the severe crisis that most GDR companies faced. Volkswagen IFA-PKW GmbH , based in Wolfsburg, was founded in December 1989, in which , in addition to VW, the IFA-PKW-Kombinat, which was under the management of the Barkas works, was involved. The Motoren-Werke themselves were spun off as Motorenwerke Chemnitz GmbH . In December 1990 VW-IFA-GmbH was founded into Volkswagen Sachsen GmbH , which was now a wholly owned VW subsidiary. In 1992, the Chemnitz engine works were added to this company. A new plant was built there which currently produces 3,000 three- and four-cylinder petrol engines per day . In addition, 4,000 differential shaft drives , assemblies , connecting rods and crankshafts are manufactured there every working day . The number of employees was around 1,100.

The cooperation with VW, which began in 1984, grew into an enormous budget item for the GDR that was not intended. According to the first estimate, the overall project, which at the time also included the production of VW diesel engines including injection pumps under the BOSCH license, was to cost 3.7 billion marks. In 1987, when the diesel engine project had already been postponed, the costs rose to a final amount of 7.258 billion marks, of which 1.5 billion was in currency , which was an exceptionally large sum compared to what was ultimately achieved. The cost explosion was due, on the one hand, to the insufficient consideration of the condition of the GDR supplier companies, which had to reach VW level within a very short time. Because the cooperation agreement also included deliveries for other engine parts from the GDR. On the other hand, there was a hesitant cooperation with the GDR automobile manufacturers. They expected that the project would be stopped by the Central Committee of the SED shortly before the end of the work , like so many - much cheaper - projects before. The designers in Zwickau and Eisenach also thought it nonsensical to fit the VW engine into the old bodies of the Wartburg and Trabants without taking the opportunity to design new bodies. Finally, there was also a lack of understanding that the licensed alpha engine series from VW was an older, outdated engine for which the effort involved seemed disproportionate. In addition to the license costs of 60 marks per unit, there was the unlimited obligation to return engines with which the GDR wanted to pay for the production line. Even if the cooperation with VW ultimately built up the substance that enabled the companies involved to survive after 1990, the project as a whole is regarded as the result of serious wrong decisions within the central administration economy. For example, the (politically prevented) in-house development of a modern four-stroke engine at AWE would have cost 4 to 5 billion marks, including the renewal of the production facilities there.