Diego Pablo Simeone (born April 28, 1970 in Buenos Aires ), also known by his nickname El Cholo , is an Argentine football coach and former player. Since 2011 he has been under contract as head coach at Atlético Madrid .

Diego Simeone began his professional career in 1987 at Vélez Sársfield . In 1990 he came to Europe and first played in the Italian Serie A at Pisa Calcio . His other club stations were Sevilla FC , Atlético Madrid , Inter Milan , Lazio Rome and again Atlético Madrid. His greatest success in his club career was winning the UEFA Cup with Inter Milan in 1998. Back then, Simeone played on a team with stars like Gianluca Pagliuca , Youri Djorkaeff and Ronaldo . A year later he won the UEFA Super Cup with Lazio Rome under coach Sven-Göran Eriksson . Teammates included Alessandro Nesta , Juan Sebastián Verón and Pavel Nedvěd . In January 2005, the midfielder returned to his homeland and played for Racing Club Avellaneda . He ended his active football career on February 17, 2006.

In the national team

Diego Simeone took part in the Copa America in 1991 and 1993 , both of which he won with the Argentine national team. Simeone played his first soccer world championship in 1994 at the World Cup in the USA . Here the Albiceleste competed as one of the tournament favorites and Simeone played alongside players like Diego Maradona , Sergio Goycochea and Gabriel Batistuta . However, they were eliminated in the second round after a defeat against Romania. This was followed by participation in the 1998 World Cup in France , where Simeone led his national team onto the pitch as captain in four out of five games. His duel in the round of 16 of the 1998 World Cup with David Beckham , where the then young star of the English national team was expelled from the field for falling behind, became famous. This tournament ended in the quarter-finals against the Netherlands. Simeone was also at the 2002 World Cup in Japan and South Korea . This tournament was a disaster for the Argentines. The two-time world champion failed in the preliminary round. Simeone had played in the first two games. He played a total of 106 international matches between July 1988 and June 2002 and was the only record player in his country from December 2000 to October 2006. In 1996 Simeone took part in the Olympic Games in Atlanta and won the silver medal with Argentina. 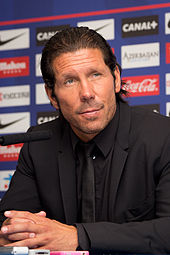 Simeone's last position as an active player was also his first as a coach: at Racing Club de Avellaneda he took over as coach in 2006. Without giving a reason, he was dismissed after relegation and later hired at Estudiantes de La Plata . With Estudiantes he won the 2006 Apertura championship 2-1 in a playoff against Boca Juniors , ending a 23-year lean period without a title for the club.

In favor of the coaching post at River Plate , Simeone left La Plata in December 2007. There, too, he won a national championship. After losing in the Copa Sudamericana and bottoming out in the table, Simeone resigned from his position in November 2008.

In 2009, Diego Simeone coached the first division club CA San Lorenzo de Almagro and resigned there in April 2010. From January to June 2011 he was the coach of the Serie A representatives Catania Calcio, who were in danger of relegation . There he took over as coach from Marco Giampaolo was but after only about four months by the previous coach of AS Roma , Vincenzo Montella , detached. On June 21, 2011 Simeone succeeded Miguel Ángel Russo at the Racing Club from Avellaneda , where he was already active as a player. Six months later, he was appointed to succeed Gregorio Manzano at Atlético Madrid .

There he achieved his breakthrough as a world-class trainer within a very short time. Simeone won the UEFA Europa League in his first season with Atlético . The next year was no less successful: With a third place in the league, Atlético qualified directly for the UEFA Champions League . The highlights of the season, however, were the successes in the UEFA Super Cup against Chelsea and in the cup final against city rivals Real Madrid . This season, however, Simeone was able to outbid again: In 2013/14 he won the Spanish championship with Atlético and reached the final of the UEFA Champions League, which was lost 4-1 after extra time against Real Madrid. Two years later, after successes against FC Barcelona and FC Bayern Munich, he again made it to the final with Atlético . There Atlético lost again as close as possible on penalties to Real Madrid.