This article deals with the Argentine association; For other clubs of the same name, see Boca Juniors (disambiguation) .

He is best known for his football department . The first team is one of the most successful soccer teams in Argentina and has played in the Primera División since the founding of the modern Argentine league system . Home games are played at the Estádio Alberto J. Armando or, more popularly, La Bombonera . Boca's greatest rival is River Plate . The games between the two clubs are called Superclásicos and put the whole country in a state of emergency.

In addition to football, basketball and volleyball are professionally operated in the club . There are also departments in numerous amateur sports.

The club colors are said to have been chosen because of a Swedish ship lying in the harbor.

Fan graffiti by the team in the La Boca district

The club was founded on April 3, 1905 by mainly Italian immigrants from Genoa in the port of La Boca , a poor district in Buenos Aires , initially as a pure football club. They received significant support from the Irish Patrick MacCarthey. The first part of the club name is also the name of the La Boca district, where the Estadio Alberto Jacinto Armando , known as “ La Bombonera ” (German: “The box of chocolates”) still stands today. The second part (Juniors) was chosen to give the club an English feel.

In 1907 the club colors blue and yellow were determined. Before that, there should have been a playoff between Boca and city rivals River Plate for the colors red and white, as both claimed these colors for themselves. Boca lost the game and is said to have chosen today's colors because of a Swedish ship that was anchored in La Boca at the time. However, this cannot be proven with sources.

From 1923 the club was expanded to include new sports, initially boxing , balón, boccia and basketball . The dominant department, however, remained the soccer department, even if Boca is now one of the major sports powers in Argentina in basketball and volleyball.

The rivalry between the Boca Juniors and River Plate can already be seen in the contrast of the districts in which the two clubs are based and which is particularly important in football, which dominates Argentine sports. La Boca is a working, emigrant and poor district of Buenos Aires , while the districts of Belgrano and Núñez , on the border of which the River Plate stadium is located, are dominated by the middle and upper classes. 40% of Argentinians are fans of the Boca Juniors, while 33% are fans of River Plate. This means that 73% of the Argentine population are supporters of one of the two capital city clubs. The following of the remaining clubs, however, is in the single-digit percentage range.

The supporters of Boca are called "Bosteros" by fans of the rival club River Plate, after the city servants who used to clean the streets of horse droppings in the district. The Boca fans themselves call themselves "Xeneizes", which means something like "residents of Genoa". This is due to the fact that mainly dock workers of Italian origin had settled in Boca. In return, the "Xeneizes" call the supporters of River Plate "Gallinas", in German "Chicken", in the figurative sense "Cowards". This, for its part, derives from River's mascot, a chicken. 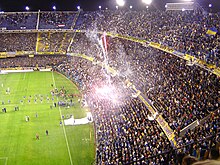 Particularly noteworthy among the club's many well-known players is Diego Maradona , who played here from 1981 to 1982 and from 1995 to 1997. Boca Juniors was and is "his" football club. His farewell game took place in 2001 in La Bombonera

Boca Juniors is also one of the most successful clubs in Argentina in basketball . The club was able to achieve the following successes in this sport:

The Boca Juniors volleyball division is also successful at the national level. The women are record champions and currently play in the highest Argentine league. The men also played a total of ten seasons in the Argentine top league between 1996 and 2015.

Among other things, the following titles were achieved (as of Feb. 2019):

Boca's most famous and influential fan group La 12 has around two thousand members.

Clubs in the Argentine Primera División 2018/19