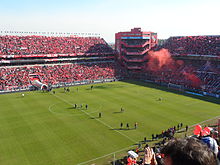 The Club Atlético Independiente (in German: "Independent Sports Club") is a football club from Avellaneda , an industrial suburb of the Argentine capital in the province of Buenos Aires . The two-time World Cup winner is the record winner of the Copa Libertadores with seven titles won between 1964 and 1984 .

After Boca Juniors and River Plate and Racing Club , Independiente is the fourth most successful club in the first division of Argentina with 16 championship titles . Local neighbor Racing is the “arch rival” of the “red devils”. The two stadiums are less than 300 meters apart and the Avellaneda Derby is the game of the year for fans.

The founding meeting of the Diablos Rojos (red devils) took place on January 1, 1905. However, not enough members were present, and so the formal act of founding was postponed to March 25, 1905. The first club president was Aristides Langone.

Independiente has been the only team to win the Copa Libertadores four years in a row.

The home stadium of Independiente is the Estadio Libertadores de América (English: "Stadium of the Liberators of America"), which was first opened in 1928 , and is also known as Doble Visera (double visor ) due to its construction . After modernization, it can accommodate 50,655 spectators.

The Cilindro , the racing club's stadium, is just a few meters from Doble Visera .

Clubs in the Argentine Primera División 2018/19