César Luis Menotti (born November 5, 1938 in Rosario ) is a former Argentine football player and coach . He led the Argentine national team to the title at the 1978 World Cup in his own country. In his homeland he is called El Flaco ("the drought").

The son of a doctor from Rosario grew up in the Fisherton borough and began playing football at the local club Unión América . From 1960 he played for the first division club Rosario Central ; he made his debut in the Argentine Primera División on July 3, 1960 in a 3-1 win against Boca Juniors . He worked for the team from his hometown for four seasons before going to the Racing Club in Avellaneda for one season . In 1965 he moved to the Boca Juniors. With the capital city team , the player who can be used in attack or attacking midfield won the championship in his first season. After 1967 he played in the United States and Brazil before becoming a coach in 1970. 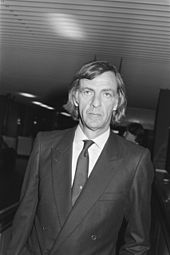 After coaching positions at Newell's Old Boys in Rosario and at CA Huracán , 1973 Argentine champion, Menotti was coach of the Argentine national team in 1974 . This had struggled through the preliminary round at the 1974 World Cup in Germany and was defeated by Brazil in the second final round and clearly put in their place by the Netherlands (0: 4). For the World Cup in your own country you needed a sense of achievement and consequently a new structure. Menotti faced great difficulties: The big clubs from Buenos Aires, Boca Juniors and River Plate , refused to release their players for the national team in 1975 and so Menotti had to fall back on other clubs. He formed a team essentially from players who came from the provinces of Santa Fé and Córdoba: Luis Galván , Osvaldo Ardiles , Américo Gallego , Mario Kempes and Leopoldo Luque . Hugo Gatti , Daniel Killer and his brother Mario, Miguel Oviedo and Daniel Valencia stayed in the national team. Menotti discovered the talent Houseman and the defensive Daniel Passarella , who later became captain of the national team. Before the World Cup, he had to limit his squad to 22 men and did without Humberto Rafael Bravo, Víctor Bottaniz and the 17-year-old talented Diego Maradona .

Argentina finally won the World Cup, the 6-0 defeat of the Peruvians against the Argentinians, which enabled them to reach the finals, being one of the most controversial games in football history. In 1979 Menotti watched the Junior World Championship won by Argentina thanks to the towering Diego Maradona. Maradona was to become the heart of the national team with which Menotti wanted to defend the title in 1982. In 1980 Argentina took part in the Mundialito in Uruguay. There they defeated European champions Germany and played a draw against the Brazilians. Because of the poorer goal difference, they were eliminated undefeated.

At the 1982 World Cup in Spain, Menotti started with the same line of defense as in 1978. He renewed the offensive with Maradona, Juan Barbas , Ramón Díaz and Jorge Valdano . The tournament was unfortunate for the Argentines. The tournament and the preparation for the tournament were overshadowed by the Falklands War , in which 655 Argentines lost their lives. The World Cup began on June 13th and Argentina signed the deed of surrender on June 14th. The Menottis team reached the second final round, where they met the top favorites from Brazil and the eventual world champion Italy. Argentina lost both games. Italy put the man marker Claudio Gentile on Maradona, who took him out of the game with legal and illegal means. Against the superior Brazilians, the referee Maradona refused a penalty and this kicked a Brazilian in the stomach during the game and was sent off.

A year later Menotti resigned from the office of national coach. From 1983 to 1991 he worked for various clubs in South America and Europe. So Menotti won with FC Barcelona , the Copa del Rey (1983), the Spanish League Cup (1983) and the Spanish Super Cup (1984). He then worked for a year and a half as coach of the Mexican national team . From the beginning of August 1990 to April 27, 1991 he was a coach at Club Atlético Peñarol in Montevideo . After further club stints, he returned to his home club Rosario Central in 2002 as a coach . Between August 2006 and January 2008 Menotti was again active in Mexico; at the first division UAG Tecos in Guadalajara he resigned on January 7, 2008.

Menotti propagates a philosophy of left football that is not only based on victory, but also on beauty and aesthetics . Menotti: “In football of the left, we don't just play to win, but to get better, to feel joy, to experience a party, to grow as people.” The founders of the Progressive Swiss Football Association Also referred to Menotti's ideas as a model.

It was often rumored that Menotti demonstratively refused to shake hands with the then President of the Argentine Military Government, General Jorge Rafael Videla , after winning the title. However, this has not been proven and was never alleged by Menotti himself. In his dissociation from the military junta , which exploited the 1978 World Cup for propaganda purposes, he went even further by describing winning the title in a television interview with the words "My players have defeated the dictatorship of tactics and the terror of the systems". On the other hand, the junta probably paved the way to the final by bribing the team from Peru in the second round - a process for which the British journalist Simon Kuper, among others , has gathered evidence.

In 2009, César Luis Menotti received the Walther Bensemann Prize from the German Academy for Football Culture for his commitment and social responsibility .

A quote from Bernd Schuster describes his way of working: “Take César Luis Menotti, a top coach, but when he talked to a player, he asked whether his wife and children were okay. Otherwise he sat on the bench and smoked 50 cigarettes. "