The President (official title: Presidente de la Nación Argentina ) is the head of state , the head of government and the commander in chief of the armed forces of Argentina and thus the most powerful politician in the executive branch of the country. The current incumbent is Alberto Fernández .

Since Argentina as a state has a strong presidential system, the president also has the option to intervene in the legislature ( decree , partially representing the congress during its vacation time) and in the judiciary (appointment of federal judges, together with the senate ).

Historical development of the office

The first Argentine politician to bear the title of “President” - still without a constitutional basis - was Bernardino Rivadavia between 1826 and 1827, but his term of office was short-lived, since at that time the conflict between Unitarians and Federalists was in full swing and the loose Argentine Confederation Provincias Unidas del Río de la Plata broke up several times and was divided into its individual states or provinces.

In the constitution of 1853 , the office was initially referred to as Presidente de la Confederación Argentina , but his competencies largely corresponded to the current office, so Justo José de Urquiza was the first official who can be called President of Argentina in today's sense. In 1860 the title was changed to its current form.

The provisions governing the election of the president went through major changes over time, also because of the constantly changing understanding of democracy. Between 1853 and 1910, for example, the presidents were elected by an electoral assembly (electoral college ), who in turn were elected by the people. The election was not secret, but had to be presented to the electoral officials either orally or in writing. From 1916 onwards, Argentina received a modern electoral law with secret voting, also through the electoral college, with regard to the presidential election. The regulations provided for a term of office of 6 years with prohibited re-election.

In 1949 Juan Perón temporarily introduced unlimited re-election of the president and his direct election, but this was withdrawn in 1955 after his overthrow. During Perón's term of office, women's suffrage was also introduced in 1951. From 1973, the president was again determined by direct election, and a one-off re-election was also planned. However, this regulation was repealed in 1981.

In the constitutional reform of 1994, the runoff election was introduced in the case of failure to achieve an absolute majority in the presidential election and the term of office was shortened to four years, with the option of one re-election.

In 1930, José Félix Uriburu was the first politician in the modern era to take office via a coup . Since the legitimacy of the election was not given, the latter referred to himself as the provisional president ( presidente previsional , i.e. interim president ). This tradition lived on in later coups. The 1966 coup then saw a fundamental change when Juan Carlos Onganía was the first to claim the legislature for himself, so that the powers of the constitutional president far exceeded and thus came close to a dictatorship . The same thing happened during the Argentine military dictatorship (1976-1983) by the respective rulers. Such an evasion of the law was described in the constitution of 1853 as treason of the fatherland ( traición a la patria ), but the punishment of the respective presidents was not regulated.

It was not until 1994 that the possibility of de facto assuming office and arbitrarily exceeding competencies was forbidden during the constitutional reform and the authority of every de facto government was declared null and void by the new Article 36 of the constitution.

The President and Vice President of Argentina are directly elected by the people in free, secret, equal and compulsory elections. There is a compulsory vote for voters .

The elections take place within the last two months of the current president's term of office . The term of office of a president is four years and can be re-elected once.

According to the constitutional reform of 1994, a candidate duo (president and vice-president) is considered elected in the first ballot if they achieve one of the following goals:

In all other cases a runoff election is held in which only the two best-placed candidate duos participate. If one of them withdraws his candidacy, the remaining candidate duo is considered the winner, so the third-placed candidate does not move up (as happened in 2003 when Néstor Kirchner was elected ).

Characteristics of the office and competencies 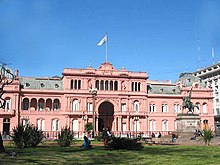 The Casa Rosada , seat of the President

According to Article 87 of the Argentine Constitution, the President represents the executive branch of the state. As is customary in a presidential system , he has a strong position, which is also expanded by legislative competencies and opportunities to intervene in the judiciary . According to critics (e.g. Guillermo O'Donnell 1994), this limits the separation of powers . O'Donnell counts Argentina as a type of delegative democracy , which has not yet reached the level of institutionalization of Western democracies.

According to the Argentine Constitution (Art. 89), the President must be an Argentine citizen and either be born in Argentina or be the son or daughter of a citizen born in Argentina. Furthermore, he must comply with the provisions that apply to senators: He must be at least 30 years old, have been an Argentinian citizen for at least six years and be able to prove a minimum income of 2000 pesos .

In the event of death, illness, absence from the capital, resignation or dismissal of the president, the vice president takes over the official business. If the vice-president is also unable to attend, Congress designates an officer as deputy until either one of the two officials is again able to serve or a new president is elected.

The powers of the President are regulated in Article 99 of the Constitution. According to this article, he is not only head of state and government, but also politically responsible for the administration of the state.

As the main representative of the executive, he carries out the laws passed by Congress by introducing the relevant regulations. In doing so, he must ensure that the principles of these laws are not changed (Art. 99 Paragraph 2). He appoints and dismisses the ministers and state secretaries, the chairman of the cabinet ( jefe de gabinete ) and, with the approval of the Senate, the ambassadors of Argentina abroad (para. 7). The appointment and dismissal of the so-called ministros plenipotenciarios (authorized ministers) and representatives for certain commercial transactions also require the approval of the Senate.

Furthermore, the President is involved in the legislation. Although he is not permitted to pass his own laws, he has the possibility, if “exceptional conditions” make the normal ways of legislating through the Congress impossible, to pass decrees (para. 3). These must not concern criminal, tax, electoral or party law and must be formulated together with the responsible ministers. He also has the right to convene the Congress for extraordinary sessions and to decide whether a session must be extended. In exceptional cases he may continue to impose a state of emergency ( estado de sitio ), in which some crucial fundamental rights are suspended. During times when Congress is on vacation, it assumes some competencies from the Senate and House of Representatives, such as appointing officials and intervening in the provinces.

With regard to the judiciary, the President appoints the judges of the Supreme Court (para. 4), but this requires the approval of a two-thirds majority of the Senate. At the suggestion of the Consejo de la Magistratura (Council of Judges), it also appoints the members of the federal judiciary courts subordinate to the Supreme Court; this also requires the approval of the Senate. Furthermore, he has the right to pardon defendants under federal law (Paragraph 5), with the exception of proceedings relating to official offenses.

Finally, the president also has representative tasks, such as receiving foreign representatives. Contracts and agreements with other countries or international organizations are counter-marked by the President. Together with the Congress, the President can declare war and, in the event of an attack on Argentina, with the consent of the Senate, enact exemptions (para. 15).