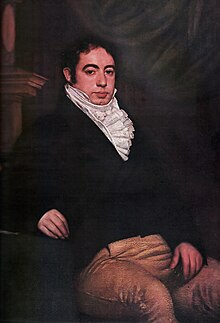 Painting by Bernardino Rivadavia while in London

Bernardino Rivadavia grew up in Buenos Aires as the son of a Spanish lawyer. As a young officer in 1806/1807 he participated in the ultimately successful defense of his homeland against the British invasions on the Río de la Plata . In 1809 he married Juana del Pino y Balbastro, the daughter of Joaquín del Pino Sánchez de Rojas , the Spanish viceroy of the viceroyalty of the Río de la Plata . Four children were born to them.

When the United Provinces of the Río de la Plata broke away from Spain after the May Revolution in 1810 , Rivadavia took over the offices of finance minister and war minister in the government of the "First Triumvirate" (Primer Triunvirato) of the insurgents (1810-1811). From 1814 to 1820 he was the envoy of the new Argentine state in Europe , and from 1821 to 1824 Argentine foreign minister. Thanks to his initiative, the University of Buenos Aires was founded in 1821.

Because the war with Brazil over what is now Uruguay (1825-1828) required a previously non-existent centralist executive, Rivadavia was the first president of Argentina from February 8, 1826 to July 7, 1827.

After his forced resignation in July 1827, Rivadavia went into exile in Great Britain . Due to a lack of support, his successor Vicente López y Planes had to restore the old constitution and give up the presidency in August, which meant that there was no head of state in the Argentine Confederation de jure until 1854. De facto, however, the governor of Buenos Aires took over this role again . After his return to Argentina in 1834, Rivadavia was tried and sentenced again to exile. He lived first in Uruguay, then in Brazil, and after the death of his wife finally, from 1842, in Spain, where he also died.

Although Bernardino Rivadavia had decreed in his will that he was not allowed to be buried in his homeland, in 1857 the Argentine government had his remains transferred to Buenos Aires, where they are buried in a mausoleum built in 1932.

The port city of Comodoro Rivadavia in southern Argentina is named after his grandson, the naval officer Martín Rivadavia (1852-1901) .