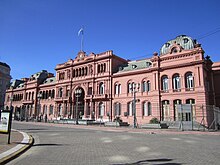 The Casa Rosada (Spanish for Pink House ) is the palace of the President of Argentina . It is located in the capital Buenos Aires on the east side of the Plaza de Mayo in the Montserrat district .

The palace was built on the remains of the old city fortifications and changed frequently. Casa Rosada is the official seat of the incumbent president, although it is only used as such on formal occasions. Another official seat is in Olivos north of the capital, but it is primarily used for recreation and informal representation.

The pink color of the exterior dates from 1873, the reign of President Domingo Faustino Sarmiento , even if the intensity of the pink color has been changed several times since then. There are two explanations for the color scheme: On the one hand, it is said that the non-party Sarmiento mixed the colors of the enemy Unitarians and federalists, white and red, in order to symbolize the unity of Argentina. The other explanation suggests that pink was a common color for house paints in the 19th century, created by mixing lime with ox blood, which was used for its water repellent and setting properties.

It was sometimes argued that the usual color of the Unitarians was actually not red, but sky blue / azure.

There is also a small museum in Casa Rosada, the entrance of which is on Calle Hipólito Yrigoyen . Exhibited are u. a. personal items of previous presidents.

If a smaller one is hoisted under the large Argentine flag, it means that the president is in the palace.