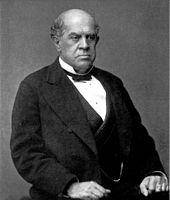 At a young age Sarmiento spoke out against the dictatorship of Juan Manuel de Rosas , after which he went into exile in Chile , Europe and the USA for several years . During this time he wrote as a journalist against the regime in his home country.

After the end of Rosas' rule, Sarmiento returned to Argentina and successively took over several local administrative offices. Already in these functions he campaigned for an expansion of the education system and began to draft a land reform . Again and again he got into conflicts with large landowners. From 1862 to 1864 he was governor of the province of San Juan . From 1864 to 1868 he was minister and from 1865 also briefly envoy to Chile and Peru. In 1868 he took over the office of ambassador to the USA, but returned to Argentina that same year. While still at sea, he received news that he had been elected President on August 16, 1868. Sarmiento spoke English and French and also received honorary degrees from the Universities of Michigan and Brown. He achieved his considerable education largely as an autodidact.

He took over the office of President on October 12, 1868 from Bartolomé Miter . At that time Argentina was at war with Paraguay, which would last until 1870, and also in intense internal disputes over a federal or centralized state structure. On August 23, 1873, an assassination attempt was carried out on Sarmiento because he had acted several times against López Jordán in the province of Entre Ríos .

He had the first census carried out in 1869 and promoted immigration because of the low population (1,830,214 inhabitants). Above all, he wanted to recruit immigrants from northern Europe because he did not consider southern Europeans to be so suitable for settlement, a project that he only partially succeeded in doing. He founded the Banco Nacional in 1871 and expanded the rail network from 573 kilometers in 1868 to 1,331 kilometers in 1874. During his presidency, the number of pupils in elementary schools rose from 30,000 to 100,000. He also had public libraries built. Its progressive economic policy was largely based on the USA. He recognized the importance of modern communication and set up more than 5,000 km of telegraph lines and the first telegraph connection with Europe. He also recognized the importance of river navigation as a way to boost Argentina's domestic economy.

Sarmiento also founded the first Argentine naval school ( Escuela de Náutica , from 1873 Escuela Naval Militar ) in 1872 , which is why a sailing training ship of the Navy Presidente Sarmiento built in 1899 was named in his honor . In total, more than 800 schools were founded across Argentina during his presidency.

A picture of him is featured on Argentina's 50 peso note today.

Sarmiento is the author of one of the most famous essays in Argentine literary history: Barbarism and Civilization (title of the first edition: Civilización i barbarie, vida de Facundo Quiroga i aspecto físico, costumbres y ábitos de la Republica Argentina ), which was published in Chile in 1845. It is the identity-establishing literary work from the early phase of nation-building in Argentina, a hybrid form between essay, novel, biography and historiography. Against the country's own "barbarism", which for him embodied itself in the rural population, especially in the Indians and gauchos , Sarmiento hopes for European immigrants who will urbanize and "civilize" the country. Because the national identity Sarmiento strives for is one that is oriented towards Europe. In “ Barbarism and Civilization ”, often simply called “ Facundo ”, he deals intensively with the life of Juan Facundo Quiroga , a caudillo as an Argentine militia leader who, at the height of his power, ruled several Argentine provinces (San Juan, Mendoza, San Luis , La Rioja) and was feared because of his arbitrariness, because he had both his own brothers in arms and opponents executed. For Sarmiento, Quiroga was the epitome of barbarism for which he showed a deep contempt.

This contempt hit the Indians even more, who like the natives of North America had to give way to European immigration and were to be destroyed:

“¿Lograremos exterminar los indios? Por los salvajes de América siento una invencible repugnancia sin poderlo remediar. Esa canalla no son más que unos indios asquerosos a quienes mandaría colgar ahora si reapareciesen. Lautaro y Caupolicán son unos indios piojosos, porque así son todos. Incapaces de progreso, su exterminio es providencial y útil, sublime y grande. Se los debe exterminar sin ni siquiera perdonar al pequeño, que tiene ya el odio instintivo al hombre civilizado. "
(" Will we succeed in exterminating the Indians? I feel an insurmountable reluctance for the savages of America, which I know of no remedy. This rabble consists only of disgusting Indians whom I would order to be hung up if they reappeared. Lautaro and Caupolicán are lousy Indians because they are all like that. Incapable of progress, their annihilation is providential and useful, sublime and magnificent. They must be exterminated, without mercy for the little offspring who already have an instinctive hatred of civilized people. ")

Meanwhile, in “ Barbarism and Civilization ”, he counts the crimes of the dictator Rosas, a massacre in which 44 Indians were shot in a square in Buenos Aires , “in order to freeze the whole world in shock at this bloodbath, the victims of which are certainly savages, but but after all people were ”.