Friedrich Albert was the son of the Reformed pastor Johann Peter Lange . He grew up in Solingen, Langenberg and Duisburg . From 1841 the father taught in Zurich , where the family now moved.

Lange studied theology , philosophy and philology in Bonn from 1848 to 1851 . In 1851 he received his doctorate with a dissertation on Questiones Metricae . After graduating, he was a grammar school teacher in Cologne from 1852 to 1855 and from 1857 private lecturer in philosophy and education in Bonn. Shortly afterwards, Lange left Bonn and remained a high school teacher in his hometown of Duisburg until 1861 . To protest against Bismarck's policies , Lange resigned from teaching in 1862 because he resisted a royal circular intended to prevent teachers from any political agitation.

Shortly afterwards he became secretary of the Duisburg Chamber of Commerce and editor for the Rhein- und Ruhrzeitung, which is published in Duisburg . The paper, which is close to the Progressive Party, dismissed Lange after several press trials because it considered it intolerable. Lange devoted himself increasingly to political questions and appeared more and more as a speaker at meetings and was a member of the standing committee of the Association of German Workers' Associations from 1864 to 1866 , to which August Bebel also belonged. From October 1, 1865 to June 29, 1866, Lange published the messenger from the Lower Rhine in Duisburg , in which he mainly addressed the Prussian Junkers and the Prussian government. In 1865 he published the work Die Arbeiterfrage , which is also considered to be an important contribution to the foundation of (scientific) economics .

Long became a member of the First International . After that, Lange, who suffered from the increasing number of lawsuits against him, gradually withdrew from German politics and began to write his main work (later split in two), the history of materialism , which was published in 1866. In the same year, a discussion of the work of John Stuart Mills appeared .

In 1866, Lange then moved with his wife and children to Winterthur in the canton of Zurich , where he was able to work as a high school teacher again. He also worked as an editor of the Winterthur newspaper Der Landbote and dealt with a response to its history in the book New Contributions to the History of Materialism . During his stay in Switzerland , Lange was intensely involved in the democratic movement and was instrumental in drafting a constitution for the canton of Zurich, which, compared to the previous one, is characterized, among other things, by the fact that all key decisions are made by means of popular initiative , optional and mandatory referendum ties back to the citizens. During this time he took on a large number of offices, including constitutional councilor , 1870–72 cantonal councilor , bank councilor and 1870/71 city ​​councilor of Winterthur. He also founded the Winterthur consumer association . 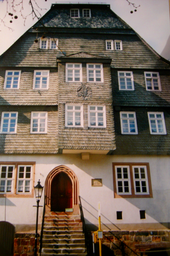 In 1868 Lange received civil rights , in 1869 he qualified as a private lecturer at the Philosophical Faculty of the University of Zurich . From 1870 to 1872 he taught inductive philosophy as a professor in Zurich before he was appointed to the University of Marburg . He was offered further professorships in Würzburg , Königsberg , Kiel , Gießen and Jena . Until his death, Lange held lectures in logic, philosophical education, on Schiller's philosophical poems, psychology and in the history of education.

At that time, Lange, who was already suffering from a serious illness (presumably rectal cancer), taught and wrote for three years in Marburg before he died on November 21, 1875. It should be emphasized that he brought about the appointment of Hermann Cohen to Marburg and thereby gained the reputation of the founder of the Marburg School of Neo-Kantianism .