Berdyaev and Berdyayev are redirects to this article. For the asteroid of the same name, see (4184) Berdyayev . 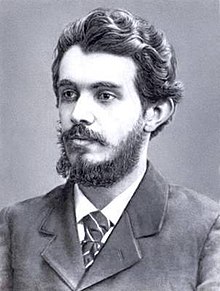 Berdjajew came from a Russian aristocratic family and was educated in a cadet school before studying at Kiev University .

Berdyayev turned against the values ​​of aristocratic society at an early age and became a Marxist . In 1898 his revolutionary activities led to a three-year exile in the Vologda governorate . After his return he worked as a freelance journalist and worked on a Marxist magazine; Gradually, however, Berdyayev turned away from Marxism and turned to Neo-Kantianism . Inspired above all by the religious philosopher Vladimir Solovyov , he strived for a union of Marxism and Russian Orthodox Christianity . In 1919 he founded the "Moscow Free Academy for Spiritual Culture". His critical attitude towards the Soviet ideology led to his expulsion in 1922 ( Philosophenschiff ).

Berdjajew went into exile in Berlin , where he founded a "Religious Philosophy Academy". There he met Max Scheler , Oswald Spengler and Paul Tillich . A lifelong relationship developed with them, which was maintained through correspondence, among other things. With Tillich in particular, he shared a similar attitude with regard to "the criticism of positivism, technicalism, rationalism, bourgeoisie and civilization as a whole".

Two years later he moved on to Paris, where he again founded an academy, published the religious-philosophical journal Der Weg and was in contact with the Renouveau catholique , including Peter Wust .

After his departure from Germany, a lively discussion of his works began, both among Protestant and Catholic theologians and publicists (e.g. Ernst Michel ). Berdjaev's publications can be found u. a. in Carl Muth's Hochland magazine . Works such as The New Middle Ages or The Meaning of History met with a positive response from Hans Scholl and other members of the White Rose .

From 1929 to 1934 Berdjajew was co-editor of the magazine Orient and Occident .

In the Third Reich , Berdjajew's works were banned due to his "probolshevik" attitude.

The basic constellation in Berdjajew's philosophy is the juxtaposition of spirit and nature and the orientation of man within this framework: Man has the choice between " objectivation ", that is, between falling into the material world and spirituality and "divine humanity". Freedom is essentially linked to the realm of the spirit - Berdjajew and Jakob Böhme place it above being, as "uncreated freedom" that is based on nothing . Here the closeness to existentialist philosophy becomes evident; Berdyayev has rightly been called a Christian existentialist . The spiritual rebirth he strives for should not only affect the individual, but also lead to a social transformation of society. In France he had contact with Emmanuel Mounier and the circle of personalists .

Berdyayev's reception differed significantly depending on the religious orientation of the recipients. Due to the anti-communist efforts of the Catholic Church in the 1920s and 1930s, attempts were made to find common ground here with emigrated Orthodox theologians. Among other things, the common early church roots were honored. Berdjajev's conception of the church was criticized by the Catholic side because he preferred an autocephalous church organization, that is, an organization of different churches with their own heads, as is characteristic of the Orthodox churches. The reception by Protestant theologians was shaped by the contradiction between similarities and differences. Berdjaev's prediction of a new epoch marked by stronger religiosity was received positively by Protestants, but others rejected his sacramental philosophical stance.

In an article published in an ecclesiastical periodical after his death, it became clear how closely Berdyaev felt himself to be connected to Orthodoxy. The editors praised him as a "loyal son of the Orthodox Church" and a "free spirit in his philosophical works".

The book Brave New World by Aldous Huxley begins with a French quote from Berdjajew as the motto in which the desirability of utopias is questioned.