This article is about the basketball player Charles Barkley. For other people, see Charles Barclay .

The 1.98 meter tall power forward was voted Most Valuable Player (MVP) in 1993 and is one of the best basketball players in history. In 1996 he was named to the list of the 50 best players of all time by a selection of former players and coaches . Barkley never won an NBA championship, but he won two gold medals with the US national basketball team, known as the Dream Team, at the 1992 Summer Olympics in Barcelona and 1996 in Atlanta. In 2006 he was inducted into the Naismith Memorial Basketball Hall of Fame .

After a career as an active basketball player, Barkley embarked on a successful career as a sports commentator for Turner Network Television and wrote several books.

Barkley attended Leeds High School, which is ten miles outside of Birmingham , Alabama . At the age of 15 he was 1.78 meters tall and weighed 99.8 kilograms. In the summer he grew again almost 18 cm and was accepted into the basketball team, in which he was able to record an average of 19.1 points and 17.9 rebounds. He led his team to the state semi-finals. In a game against one of the country's most recruited players, Bobby Lee Hurt, Barkley scored 26 points, attracting the attention of Sonny Smith, Auburn University coach , who then recruited him for the university's athletics department.

Barkley played basketball for the Auburn Tigers for three years . Although he struggled to keep his weight under control, he held his own as a standout player, topping the Southeastern Conference in the rebounds category every year. Although shorter than the average center, Barkley was placed in that position in college. He quickly became one of the most popular players, as he surprised the fans with dunks and blocks that were not trusted because of his height and slightly overweight. It was not uncommon for Barkley to get a defensive rebound and instead of a pass, complete the action after dribbling with a dunk himself. His physique and skills earned him the nickname "The Round Mound of Rebound".

In his three-year college career, Barkley scored an average of 14.8 points, 9.6 rebounds, 1.7 blocks and 1.6 assists with a hit rate of 68.2% from the field. He has received numerous awards, including being voted SEC Player of the Year 1984 and three times to the All-SEC team. The Birmingham Post-Herald named Barkley SEC Player of the Decade (1980-1989). He did not get a college degree.

Since March 3, 2001, Barkley's jersey number 34 is no longer awarded by the Auburn Tigers. 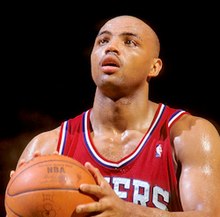 The 1.98 meter tall Barkley was brought into the NBA in 1984 in fifth place in the NBA draft by the Philadelphia 76ers . The team from Philadelphia was at that time one of the absolute top teams in the league, winning the 1983 NBA championship and having two former MVPs under contract with center Moses Malone and small forward Julius Erving . Along with Barkley, the Sixers had one of the best trios in the league. However, they lost the final series of the Eastern Conference against the reigning champions from Boston 4-1. Barkley recorded an average of 14 points and 8.6 rebounds during the regular season and even 14.9 points and 11.1 rebounds per game in the playoffs. At the end of the season he was elected to the NBA All-Rookie Team . In his second year Barkley was able to increase to 20 points and 12.8 rebounds per game during the regular season, but failed with the 76ers in the second round of the playoffs at the Milwaukee Bucks . After the season, Moses Malone was handed over to the Washington Bullets by the 76ers and Barkley became the team leader. In his third season, 1986/1987, Barkley got the most rebounds of all players with 14.6 rebounds per game. In addition, his points average shot up to 23 points, but in the playoffs they failed for the second year in a row against the Bucks. After the season, Julius Erving announced his retirement and Barkley became the 76ers' superstar. The next season, Barkley scored 28.3 points and picked up 11.9 rebounds per game, but the 76ers failed to make the playoffs for the first time since the 1974/75 NBA season. The following season, 1988/1989, they made it into the playoffs, but had to admit defeat to the New York Knicks in the first round .

In the 1989/1990 NBA season, Barkley finished second in the NBA MVP election , just behind Magic Johnson . He was elected to the All-NBA First Team for the third year in a row and an NBA All-Star for the fourth year in a row. He helped the 76ers to 53 wins in the regular season, but failed in the second round of the playoffs at the Chicago Bulls . In the following, his seventh, season with the 76ers, Barkley still recorded a strong 27.6 points and 10.1 rebounds per game and even received the NBA All-Star Game MVP award in his fifth NBA All-Star Game . In the playoffs, however, the 76ers were again defeated by the Chicago Bulls and their leader Michael Jordan . In his final season with the 76ers, he was able to achieve 23.1 points and 11.1 rebounds per game, but his team did not make it to qualify for the playoffs. He ended his career with the 76ers in fourth place among the best scorers with 14,184 points and third in the rebounds with 7079.

Before Barkley found a new club, he was nominated for the 1992 Original Dream Team . Here he played alongside NBA legends such as Michael Jordan, Magic Johnson and Larry Bird . For many experts, this dream team was the best team that has ever played together. The Dream Team won the gold medal at the Olympic Games in Barcelona without any problems . Charles Barkley was the team's top scorer both during preparation and during the Olympic Games .

On July 17, 1992, Barkley was sent to the Phoenix Suns in exchange for Jeff Hornacek , Tim Perry, and Andrew Lang . In his first season, Barkley scored 25.6 points, got 12.2 rebounds and distributed 5.1 assists per game, leading his new team to 60 wins in the regular season. He was then chosen to be the regular season MVP . Despite 26.6 points and 13.6 rebounds in the NBA playoffs from Barkley, the Suns failed in the NBA Finals to Michael Jordan and his Chicago Bulls. The following season, Barkley speculated that it could be his last due to severe back pain. Nevertheless, it was enough in the season for 21.6 points and 11.2 rebounds per game and the eighth nomination for NBA All-Star in a row. After 56 wins in the regular season, the Suns made it to the Western Conference Semi-Finals in which they had to admit defeat to the Houston Rockets after seven games .

Barkley decided against resigning as an active player and played despite injury problems in the following season. The Suns won 59 games in the 1994/1995 regular season, but lost again to the now defending Rockets. The 1995/1996 NBA season would be Barkley's last with the Suns. He led the team with his 23.3 points and 11.6 rebounds per game and reached this season as the tenth player in the history of the NBA 20,000 points and 10,000 rebounds. In the playoffs, however, the Suns had to say goodbye after four games against the San Antonio Spurs .

Even before the 1996/1997 NBA season began, Barkley was sent to the Houston Rockets in exchange for Sam Cassell, Robert Horry , Mark Bryant and Chucky Brown . At the Rockets, Barkley had two teammates who were among the best in league history: Hakeem Olajuwon and Clyde Drexler . In his very first game, Barkley was able to set a new career high of 33 rebounds. Injury problems kept him in 53 games, but the Rockets still won 57 games. In the Western Conference Finals, however, it was no longer enough against the Utah Jazz .

In the following season the injury problems did not decrease and the Rockets could only get 41 wins. In the playoffs they were eliminated in the first round, again by Jazz. The 1998/1999 season was shortened by the lockout, but Barkley had enough time to become the second player after Wilt Chamberlain in NBA history to record 23,000 points, 12,000 rebounds and 4,000 assists. In the playoffs, the Rockets could not keep up with the Los Angeles Lakers and were eliminated again in the first round. In his final season in the NBA, Barkley's career seemed to end prematurely when he was sidelined with a left quadriceps injury. Not wanting his career to end like this, he returned for one final game after four months. He scored his last basket on April 19, 2000 in a game against the Vancouver Grizzlies , was then substituted immediately and resigned after the game as an active player.

Today Charles Barkley is active as a commentator and expert for the American television station TNT and as an advertising medium and promoter for T-Mobile USA. 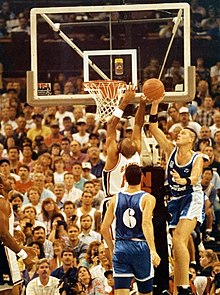 Barkley on the USA national team

In his first season with the Phoenix Suns in 1992/93, he was voted Most Valuable Player of the NBA Regular Season .

Barkley was jailed for three days on March 7, 2009 after a drunk driving on New Year's Eve. The term had been reduced after participating in a program to treat alcoholics.