The Memphis Grizzlies are a team of the North American professional basketball league National Basketball Association (NBA). The team plays its home games at the FedExForum in Memphis , Tennessee . The Grizzlies belong to the Western Conference .

The team was originally formed as an expansion team under the name Vancouver Grizzlies and joined the NBA in the 1995/96 season. After the end of the 2000/01 season, the Grizzlies moved to Memphis. 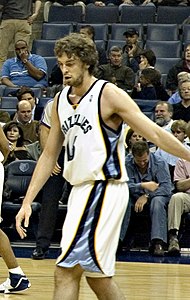 The team was founded in 1995 with the Toronto Raptors as part of the expansion of the NBA to Canada and was based in Vancouver , British Columbia . This origin explains the name "Grizzlies". Despite emerging talents like Shareef Abdur-Rahim , Mike Bibby and Bryant Reeves , the Grizzlies suffered from poor audience interest and persistent failure. A sad climax was that college star Steve Francis refused to play for the Grizzlies after his signing in the 1999 NBA Draft and had to be transferred.

In 2001 the franchise moved to Memphis. In the same year, the Spaniard Pau Gasol was signed by the Atlanta Hawks for star player Abdur-Rahim during the draft .

Under Gasol, the Grizzlies moved into the play-offs for three years in a row (2004 to 2006). The 2006/07 season ended as the worst team in the league (only 22:60 wins). At 2007 NBA draft was strengthened subsequently with Mike Conley Jr . A year earlier, Rudy Gay had already been obtained via draft. During the season, coach Mike Fratello was released and replaced by interim coach Tony Barone sr. replaced. Barone was previously the Grizzlies' Player Personnel Director and had never coached an NBA game at the time. Due to the poor season, Jerry West announced early that he would step down from his position as general manager after 2006/07.

For the 2007/08 season , Chris Wallace was hired as the new General Manager. Marc Iavaroni took over the position of head coach and was replaced by Lionel Hollins during the current season. During the 2008 NBA draft , the draft rights to Kevin Love were exchanged for OJ Mayo , the Minnesota Timberwolves . While Love became a multiple All-Star, Mayo, despite a promising rookie season , never lived up to expectations and left the team in 2012.

On February 1, 2008, Gasol was traded for Kwame Brown , Javaris Crittenton and Aaron McKie from the Grizzlies to the Los Angeles Lakers . In this trade, they received the transfer rights through Pau Gasol's brother Marc Gasol and the 1st Round Draft Picks in 2008 and 2010 from the Lakers.

In July 2009, the Memphis Grizzlies received Zach Randolph from the Los Angeles Clippers as part of a trade . In return, Darko Miličić moved to the New York Knicks and Quentin Richardson moved from New York to Los Angeles. A wrong decision was made in the 2009 NBA draft when Hasheem Thabeet was selected in second place and thus players like James Harden or Stephen Curry were left out. The 2009/10 season started unpleasant, as Allen Iverson, who had been recruited as a new star player , left the team after a few games and only one of the first nine games could be won. However, the team's game improved very much, which is mainly attributed to the performance improvements of Zach Randolph and Marc Gasol. Lionel Hollins was named “Coach of the Month” for December 2009. With eleven home games won in a row, the then youngest team in the league set a new franchise record.

In the 2010/11 season , the team, still under the leadership of Lionel Hollins , came despite a moderate start (only eight wins in the first 22 games) with a final balance of 46:36 in the playoffs. One of the main reasons for this success was that, unlike in the previous season, the team acted as a unit. The most important single player was Zach Randolph , who was able to improve again compared to the previous season and again achieved a season double-double (20.1 points and 12.2 rebounds per game). But Tony Allen , who was able to upgrade the team especially defensively, Mike Conley Jr. , who made the breakthrough into the upper class of point guards, and Rudy Gay , who was very important for the team's offensive, contributed to the success of the team . The latter suffered an injury on February 15, 2011 against the Philadelphia 76ers and was out for the rest of the season including the playoffs. So Hasheem Thabeet was traded against Shane Battier to the Houston Rockets to get a good replacement for him. In the playoffs they were able to win a game 101: 98 for the first time in the club's history on April 17, 2011 against the San Antonio Spurs . With three more wins, the Grizzlies moved into the second playoff round on April 29, 2011 (99:91). This made them only the fourth team in NBA history to defeat a first-placed team in the first round of playoffs. In the second round they met the Oklahoma City Thunder . After seven games, Memphis lost the series and was eliminated. Despite the narrow elimination, the season was by far the most successful in the club's history.

In the 2011/12 season , the Grizzlies reached the playoffs again. Here they were eliminated in the first round with just 3: 4 against the LA Clippers . In the 2012/13 season Memphis started strong and was in the first weeks in phases, the team with the best record. In the home win against the Dallas Mavericks on February 27, a gap of 25 points was made up, which is a new franchise record. The 2012/13 season ended the Grizzlies with a record of 56 wins and 26 defeats in 5th place in the Western Conference. During the season, top scorer Rudy Gay was transferred to the Toronto Raptors . In the playoffs, the Grizzlies made it into the conference finals, where they were eliminated with 0: 4 wins against the San Antonio Spurs . Shortly thereafter, the Grizzlies announced that Lionel Hollins would not get a new contract as the team's head coach.

Lionel Hollins' successor was the previous assistant coach David Joerger . Joerger had previously worked as an assistant coach for the Grizzlies for 6 years and received a contract as head coach until 2015. Under Joerger, they reached seventh place in the Western Conference with 50 victories and thus qualified again for the playoffs, where after 7 Play the Oklahoma City Thunder was defeated.

During the 2014/15 season , the Grizzlies reinforced themselves with forward Jeff Green of the Boston Celtics . They finished the season on a 55-27 record in fifth place in the Western Conference. They reached the second playoff round, but where they lost to the eventual champions Golden State Warriors with 2: 4. The 2015/16 season was less successful for the Grizzlies. The regular players Gasol and Conley were out several games, other players were absent due to injuries, so that Memphis had 28 different players under contract over the season. The playoffs were reached, but they were eliminated without Gasol and Conley in the first round with 0: 4 against the San Antonio Spurs. Then trainer Joerger was dismissed from the Grizzlies as a trainer.

On May 29, 2016, the Grizzlies signed David Fizdale as the team's new head coach . He was previously assistant coach at the Miami Heat for eight years and won two NBA championships under head coach Erik Spoelstra . Fizdale signed a four-year deal in Memphis. With Fizdale the Grizzlies reached the playoffs, but where they lost 4-2 to the San Antonio Spurs in the first round. In the summer of 2017, two important cornerstones of the Grit n 'Grind era left the team with Forward Zach Randolph and Guard Tony Allen . The team began rejuvenating the squad, allowing younger players more playing time. Point guard Mike Conley Jr. was injured after the 12th game of the season, however, and was out for the rest of the season. With a rump team consisting of the two leading players Marc Gasol and Tyreke Evans , the Grizzlies only fight for 22 wins of the season, which meant the penultimate place in the Western Conference and the end of the playoffs, after the last seven successful qualifications in a row.

The end of grit n 'grind, rebuilding with Morant (since 2019)

In the 2018 NBA draft , the Grizzlies reinforced themselves with Jaren Jackson Jr. , who was drawn in fourth place, and started a new era. The Grizzlies gave Marc Gasol to the Toronto Raptors during the season . There were also rumors about Mike Conley Jr. , but Conley stayed with the Grizzlies for the time being. Memphis clearly missed the playoffs again. As a result, Conley was handed over to the Utah Jazz as the last member of the Grit n 'Grind era . As his successor in the point guard position, the Grizzlies chose Ja Morant in second position in the 2019 NBA draft .

The Vancouver Grizzlies played from 1995 to 2001 at General Motors Place (19,193 seats) in Vancouver, Canada. After the Grizzlies moved to Memphis, they played their home games in the Pyramid Arena . Since 2004 the FedExForum (18,165 seats) in the south of downtown Memphis has been the home of the Memphis Grizzlies.

From 2013 to 2017 Iowa Energy (now the Iowa Wolves) was the Grizzlies' farm team, initially in the NBA Development League (D-League), and since the 2017/18 season in the G-League . Since the league was renamed and Energy was taken over by the Minnesota Timberwolves, the Grizzlies have had their own farm team, the Memphis Hustle . There, players of the Grizzlies can collect game practice if they have not made it into the fixed rotation of the Grizzlies. The Grizzlies had previously worked with the Dakota Wizards and the Reno Bighorns . Among other things, Hasheem Thabeet ran for a D-League team because he could not assert himself in the Grizzlies squad as hoped. 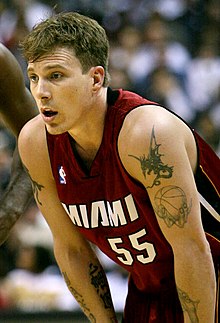