from Wikipedia, the free encyclopedia
This is the sighted version , flagged on July 21, 2021 . There is 1 pending change that has yet to be viewed.

The Milwaukee Bucks are part of the North American professional basketball league NBA . The franchise has played its home games at the Fiserv Forum in Milwaukee , Wisconsin since the 2018/19 season . The franchise won the NBA title in 1971 and 2021 . 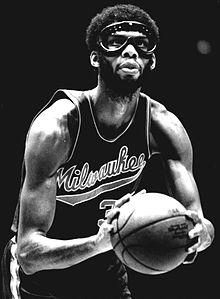 The Milwaukee Bucks were founded in January 1968 and began playing in the NBA in the 1968/69 season . The Bucks were extremely successful after just a few years. They chose Lew Alcindor (later Kareem Abdul-Jabbar) in the NBA Draft in 1969 in the first place. In addition, superstar Oscar Robertson joined the team a year later . This duo made the Bucks one of the most dominant teams of the early 1970s. In their third season, they achieved the longest winning streak in the NBA to date with 20 wins in a row. That same season, the Bucks won their first NBA championship. In the NBA final, they dismantled the Baltimore Bullets with 4-0 victories. With this title, after only three years to date, the Bucks are the team that has been able to win the NBA trophy the fastest since its foundation. 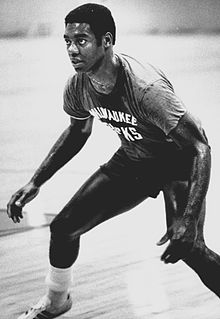 In the years that followed, the Bucks remained a top team in the Eastern Conference . They were able to win their Central Division four times in a row (1971–1974). In the 1973/74 season, the team made it to the NBA final again, this time they lost to the Boston Celtics 2-4 wins. After the final defeat, Abdul-Jabbar left the Bucks and moved to the Los Angeles Lakers . Robertson, on the other hand, ended his career in 1974.

The team was restructured with Abdul-Jabbar's transfer. Don Nelson , who took over the team in 1976, built a powerful team around players such as Sidney Moncrief , Marques Johnson , Paul Pressey , Ricky Pierce , Bob Lanier , Terry Cummings and Jack Sikma , which was one of the best in the league in the 1980s regularly reached the play-offs . During this time, the Milwaukee fan base was worried about the future of the Bucks, because the Bucks had played in the smallest hall in the NBA and the city did not want to build a larger one. That's why rumors began to circulate that the Bucks might be leaving town. In 1985 Herb Kohl bought the Milwaukee Bucks and built a new hall with other Milwaukee businessmen. In general, however, the 1980s were one of the team's successful years. In 1983, 1984 and 1986 the Bucks reached the Eastern Conference Finals, but without winning a series. In 1987 Nelson left the Bucks and Del Harris took over. Milwaukee remained competitive until the beginning of the 1990s, but after that, with the resignation of many stars, the creeping upheaval began.

This was followed by a long period of reconstruction. High draft positions were guaranteed due to poor seasonal balance sheets . In 1993 they chose Vin Baker , in 1994 Glenn Robinson followed and in 1996 they got Ray Allen . However, the sporting success did not want to set immediately, so that in 1997 Baker was transferred to the Seattle SuperSonics for Terrell Brandon and Tyrone Hill . In 1998, George Karl was also hired as the new coach. After you also got Sam Cassell from the New Jersey Nets , the sporting success returned and in 1999 they qualified for the play-offs for the first time in eight years. 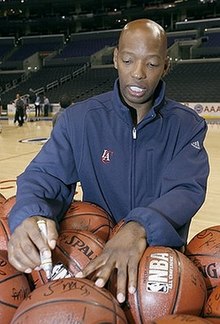 Towards the end of the 1990s followed a very successful sporting period and the Bucks were able to establish themselves in the play-offs for a few years and were long considered one of the top clubs in the Eastern Conference. 2001 they reached the Eastern Conference final again, but dropped out just against the Philadelphia 76ers . The successful period ended in the mid-2000s after Robinson, Allen and Cassell left the team one after the other and the hopefuls who were committed as successors could not convince athletically as they had hoped, or were repeatedly thrown back due to injuries. Above all, center Andrew Bogut , who was drawn first in the 2005 NBA draft , could never become the full service provider he had hoped for.

The greatest ray of hope in those years was Michael Redd . This was one of the best scorers in the league in the mid-2000s. The Bucks reached the play-offs in 2006 with a 40-42 victory record, but lost the series with 1-4 against the Detroit Pistons . In the years to come, the Bucks made a name for themselves through wrong draft decisions and changing coaches. The play-offs were missed three times in a row between 2007 and 2009. The raised draft picks Bogut, Yi Jianlian and Joe Alexander disappointed and were handed in early. Which is why the previous manager, Larry Harris, was replaced by John Hammond in 2008. Michael Redd seriously injured his knee in the 2009/10 season , so that he could no longer build on previous performances after his recovery and left the team in 2011.

In the 2009 draft, the Bucks secured the rights to Guard Brandon Jennings . A new team is to be built around him and the Bucks established themselves again as play-off contenders and were also able to achieve them in 2009/10 . Coach Scott Skiles in particular stabilized the Bucks, who missed the play-offs again in 2010 and 2011, but were only just behind the other teams. In spring 2012, the Bucks secured the services of Guard Monta Ellis for Bogut through a trade in order to provide Jennings with another scorer. With Ellis and Jennings in guard positions, the Bucks wanted to be a figurehead of the Conference again. The forwards Ersan İlyasova , Luc Mbah a Moute and Center Samuel Dalembert are to be further important components .

During the 2012/13 season , the Bucks reached the play-offs again after three years as third in the Central Division and eighth in the Eastern Conference. There they met last year's champions, the Miami Heat. Against Miami, the Bucks were eliminated with 4-0 wins. Shortly thereafter, head coach Jim Boylan was dismissed as head coach, his successor was Larry Drew. Drew had previously headed the Atlanta Hawks . In the summer of 2013 Jennings left the Bucks and moved to the Detroit Pistons for Brandon Knight . Ellis and Dalembert also switched and signed with the Dallas Mavericks .

New beginning with Giannis Antetokounmpo (since 2013) 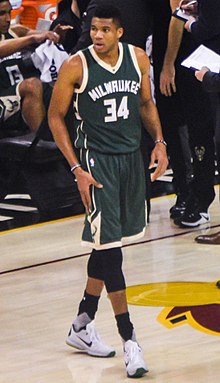 Giannis Antetokounmpo has been playing for the Bucks since 2013

OJ Mayo , Caron Butler and Zaza Pachulia were signed as replacements . In addition, the contract with the hopeful center talent Larry Sanders was extended. The season ended athletically at the end of the Eastern Conference table. With only 15 wins and 67 losses, the Bucks were the worst team in the entire league. At the end of the 2013/2014 season, Herb Kohl announced the sale of the Bucks to Wesley Edens and Marc Lasry for a price of 550 million US dollars. When the Bucks were sold, the contract stipulated that the Bucks would remain in Milwaukee and not be relocated. 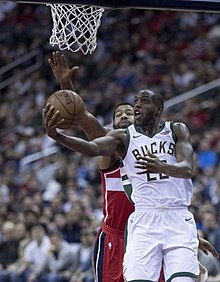 Khris Middleton (With the Bucks since 2013)

In the 2014 NBA Draft , the Bucks received second voting rights, pulling Jabari Parker from Duke University . The new head coach for the 2014/2015 season was Jason Kidd , who previously looked after the Brooklyn Nets and led them into the second round of the play-offs. The Bucks had previously announced the separation from Larry Drew . The Bucks turned out to be a positive surprise in the 2014/15 season and fought long for a place in the play-offs, despite the team struggling with several incidents. The previously outstanding Jabari Parker tore a cruciate ligament in December, and Larry Sanders asked to terminate his contract due to mental problems. In the course of the season, the reigning rookie Of The Year Michael Carter-Williams was signed and the former first pick Kenyon Martin was brought in with a ten-day contract, but not signed on in spite of attractive performances. At the end of the season, the Bucks took 6th place in the Eastern Conference and got into the play-offs, where they lost in round 1 to the Chicago Bulls in six games.

Despite the signing of free agent Greg Monroe and the recovery of Jabari Parker, the Bucks could not qualify for the play-offs again. On the other hand, however, especially Giannis Antetokounmpo and Khris Middleton , who achieved a great leap in performance, developed further. In 2017 Antetokounmpo became the first Bucks All-Star since Michael Redd in 2004. In addition, the Bucks qualified for the play-offs in the 2016/17 season with 6th place in the Eastern Conference. In the first round, the Bucks met the Toronto Raptors and lost to them in six games. At the end of the season, Malcolm Brogdon was awarded the NBA Rookie of the Year Award , Antetokounmpo won the NBA Most Improved Player Award .

Expectations were high in the following season. Since this could not be met by the middle of the season, coach Kidd was dismissed and his assistant coach Joe Prunty took over the post. With him, the Bucks reached the NBA play-offs again, where they lost in a close series to the Boston Celtics in the first round with 3-4.

For the 2018/19 season, the Bucks presented Mike Budenholzer as their new head coach. Budenholzer had previously coached the Atlanta Hawks from 2013 to 2018 as head coach. In the 2018 NBA draft , the Milwaukee Bucks secured shooting guard Donte DiVincenzo in 17th position , who had recently won the NCAA Division I basketball championship with Villanova in the past NCAA season . In the free agency phase, Milwaukee hired Center Brook Lopez , and Turkish forward Ersan Ilyasova returned to his old place of work after three years. The former 2nd pick of the 2014 draft Jabari Parker moved to the Bulls in his hometown of Chicago after a disappointing first few years in Milwaukee .

Milwaukee went into the new season unchanged and played the strongest regular season since 1981. With 60 wins they reached first place in the Eastern Conference. Antetokounmpo and Khris Middleton were invited to the All-Star Game. In the play-offs they easily defeated the Detroit Pistons and Boston Celtics and reached the conference final for the first time since 2001, where the Toronto Raptors were beaten 2: 4.

When it was founded in 1968, the Bucks moved to the UW-Milwaukee Panther Arena . The arena, built in 1950, was the home hall of the Bucks until 1988. As early as the early 1980s, voices were raised that the Bucks would need a new venue in the future in order to remain competitive. Thanks to the efforts of the Bucks owner Herb Kohl , plans for a new arena were forged and finally implemented.

In 1986 the foundation stone was laid for the BMO Harris Bradley Center , which finally opened in 1988. The Bradley Center has been the home of the Bucks since the 1988/89 season and is also home to the club's training center and club management facilities. September 2013 the NBA stated that the Bucks arena was no longer up to date and that a new hall would have to be built in the near future in order to be able to keep the franchise in Milwaukee. In June 2016, the Milwaukee Bucks began building a new arena, which was completed for the 2018/19 season.

From the 2018/19 season, the Bucks will play their home games in the new Fiserv Forum .