A player trying to score a 3 point field basket

The three-point line (also known as the three -point line ) on a basketball court is the line behind which a player has to be when throwing a basketball if his goal is to score three instead of the usual two points.

In the 1930s the suggestion was made that the litters should be rated according to their distance. But it wasn't until 1945 that the three-point line was used for the first time in a National Collegiate Athletic Association game. In 1968 the three-dot line was made popular by the ABA (American Basketball Association). It wasn't until October 12, 1979 that the NBA took over the three-point line. Chris Ford then hit the first three in the NBA.

The FIBA introduced it in the 1984th The three-point line was added to the regulations in 1984 with a measure of 6.25 m to move the game further away from the basket. The model for this was a rule change in the NBA, in which this had previously been introduced. 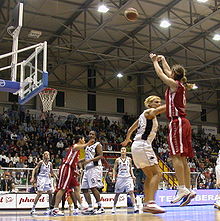 If a player is fouled while taking a shot and is behind the three-point line, he is awarded a bonus free throw if the throw was successful . If he hits this free throw, he scores a so-called 4-point game . If the attempt to throw is unsuccessful, he receives three free throws.

If streetball is played on a basketball court, the three-point line also applies here. Then, however, every hit that is scored by a throw with the throwing player behind her counts two points instead of just one, as is usually the case with streetball.

The three-point line is drawn on the playing field as follows: The center of the basket is projected vertically onto the playing field. From this point a semicircle with a radius of 6.75 m is drawn (7.24 m in the NBA). The 6.75 m is measured on the outside edge of the line. The line is drawn at the level of the free-throw line, parallel to the sideline and up to the end line.