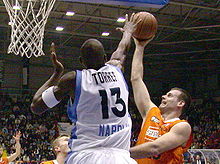 Óscar Torres with a shot block 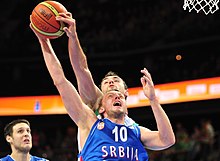 In basketball, a block denotes both the change in the trajectory of the ball when a defending player tries to hit the basket (also called a shot block ) and the keeping of the player in possession of the ball from his direct opponent by having a teammate stand in the way and thereby keep the defender away, so that the player in possession of the ball can throw or pass freely (also called a screen or pick ). 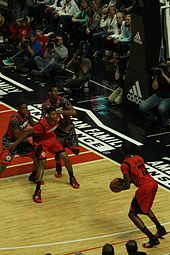 Screen : A player blocks two opponents in order to allow his fellow player to throw openly

There are two types of blocks in basketball:

A block in defense (also known as a shot block) is when a defender prevents the attacking team from throwing a goal by blocking the thrown ball with his hands in the air or hitting it away. However, this is only allowed as long as the ball still has an ascending trajectory or the ball is not yet falling, i.e. H. has not yet reached or exceeded its highest point in the ascending phase. If this happens anyway, it is a rule violation, a so-called goaltending . In this case, the attempt to throw is considered valid and the corresponding number of points is credited to the attacking team. The decision on a possible rule violation is made by the referee (s) .

The shot block requires precision and temporal accuracy, since in the event of physical contact with the opponent during the attempt to block, the referee must decide whether to violate the regulations again.

When blocking in the attack (also called screen or pick ), the player in possession of the ball is separated from his direct opponent in that another player on the attacking team stands in the defensive path and thereby blocks the defender away so that the player in possession of the ball can pass. This type of block is part of the pick and roll move that is often used in basketball .