Course of the Waal 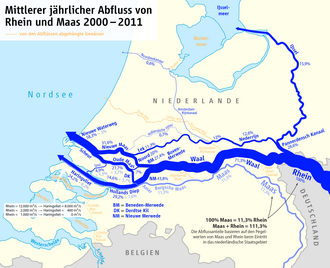 The Waal (Latin Vahalis , older Vacalus , from Celtic Vocalus ) is the southern and wider of the two great mouths of the Rhine into the North Sea . Together with the Meuse , it forms the Rhine-Maas Delta in the Netherlands .

Shortly after reaching the German-Dutch border, the water of the Rhine - called Boven-Rijn ("Upper Rhine") in Dutch - flows through the Bijlands Canal and is distributed over its two main estuary arms near Millingen . The Waal – Boven Merwede receives two thirds of the mean water flow of the Rhine. The other third of the volume flow flows through the Pannerdens Canal to the Nederrijn ("Lower Rhine"), which after the IJssel branches off (with 11%) continues as the Nederrijn (with 22%) and further downstream becomes the Lek .

From the former confluence of the Meuse and Waal at Woudrichem , the river changes its name Waal in Boven Merwede ( "Upper Merwede"). This section of the river forks later into the Nieuwe Merwede ("New Merwede") with an average of 44% of the water flow of the Rhine and into the Beneden Merwede ("Untere Merwede") with an average of 23%. The latter, again forked, reaches the port of Rotterdam as the main shipping route together with the Lek and the North Sea as the Nieuwe Waterweg .

The Waal only became the most water-rich arm of the Rhine in the Rhine delta over the last millennium. Storm surges such as the Elisabethenfluten , which tore deep sea bays into the country, especially north of the Scheldt estuary, moved the erosion base for the branches of the Rhine inland, which increased their flow rate and erosion force ( see also: Rhine-Maas-Delta ). This westward shift of the main drainage lines of the Rhine would have made the Waal the sole main stream if water had not been diverted from the Waal to the silting Nederrijn in 1771 via the Pannerdens Canal, which had existed in a small form since 1706, and its upper course, which still exists today, had been created . At the same time, the proportion of two thirds of the water flow remaining in the Waal (on average around 1500 m³ / s) was determined. The section of the Waal above this junction was initially called Boven Waal , later Rijn ; the section below Beneden Waal , later Waal .

In the further course below the river section known as the Waal , parts of the runoff are artificially fed to the more northerly channel: When the water flow of the Rhine is low (<1100 m³ / s at the Lobith gauge), the sluices of the Haringvliet dam are closed, and all of the water from the Maas and Waal only reaches the sea in Rotterdam via the Nieuwe Waterweg.

The Waal with the city of Nijmegen, behind the morphologically still active steep bank, painting by Jan van Goyen , 1641

The Waal runs through areas with a lower population density than in the river basin of the northern arms of the Rhine. The largest city, Nijmegen , lies on the high bank, which is formed by terminal moraine hills from the Saale Ice Age rising in the south . On the Waalkade there are restaurants and terraces, a casino and the Velorama bicycle museum . Other towns are Tiel in the Betuwe area on the right of the Waal and Zaltbommel on the left bank.

The Waal cross the following bridges (downstream from east to west):

Since the Waal in Nijmegen makes a strong curve and also narrows, the city always flooded during high water. That is why the plan arose to give the Waal more space. Under the motto: Ruimte voor de Waal (Place for the Waal), the river on the right bank will be expanded from above the road bridge to below opposite the port entrance on the left bank. For this purpose, the right bank was laid back so that an island was created. A second arm of the river is created between this and the new bank at Nijmegen-Lent , but it is dammed above the road bridge. In this dam, through openings are built in at different heights, which allow the water to flow into this arm of the river at every water level. Comprehensive infrastructure measures were necessary to realize this project. The entrances to the road bridge and the railway bridge had to be partly built as bridges, around 1200 meters below the railway bridge, shortly above the power plant a third bridge was built over the Waal and two more bridges were built between the newly created island and the right bank of the Waal. An additional flood protection measure on the Waal is the removal of one meter of 450 groynes from Nijmegen to Gorinchem . The name Spiegelwaal was chosen from 944 suggestions. The entire structure was handed over on December 3, 2015.

The legend of the Waal