Depiction of a field snake around 1500, Albrecht Dürer 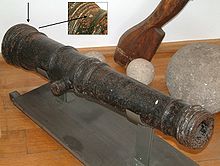 Field snake with 6 cm caliber. Small picture: Enlarged view of the ignition hole on the top

The name Feldschlange comes first time in Germany in 1440 before and probably dates from the first as snakes - or dragon head shaped mouth . However, it is also possible that the term alludes to the design of the field snake, the tube of which was often forged with a corkscrew-shaped iron band (see shrink rings on today's cannons).

Compared to the siege guns known as cartoons , field snakes had a relatively small bullet caliber , between 13 cm ( whole field snakes ) and approx. 5 cm ( falconettes ) or 3.5 cm ( serpentine ). The barrel , on the other hand, was usually between 30 and 40 caliber lengths longer than the barrel of the Kartaune, which usually only counted 17 calibers, the quarter kartaune also 24 and the Falkaune (if classified as kartaune, see below) also 27 calibres. The longer tube increased the accuracy, range and penetration effect of the projectiles, since the bullets were exposed to the explosion pressure of the propellant charge for longer. Guns with an even greater caliber length were also known as bastard field snakes (from French batard ).

The development of cannon casting in the 16th century was based on the combination of several breakthroughs in the crafts involved:

The iron balls fired varied in weight from about 20 pounds for the largest guns to one pound for the smallest. Field snakes were usually mounted on a two-wheeled carriage that could be pulled by a horse.

The classification of the field snake types was subject to certain variants depending on the region or author with regard to the naming and the associated caliber and bullet dimensions. The field coils are generally divided into whole field coil (bullet weight: about 18 lb), Notschlange (16-pounder) Half field coil (9-pounder) and Quarter snake or Falkaune (7-pounder, Michael Mieth divides the Falkaune in 1684 but as a 6-pounder cardaune!) and a falcon (2-pounder).

This type of cannon was later used in the field cannon .

Curiosity: The pipes of disused field snakes were occasionally walled in as a curbstone on busy street corners to protect the house edges (as described by Wilhelm Raabe in Die Chronik der Sperlingsgasse ).