This article explains the Church in Rome, for other meanings see San Pietro in Vincoli (disambiguation) . 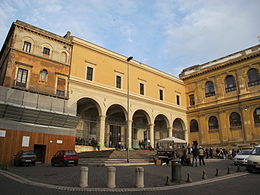 Facade of the basilica

The church of San Pietro in Vincoli al Colle Oppio ( Latin Sancti Petri ad vincula , German  St. Peter in the chains ) is located on the Esquiline hill in the 15th century. Rione near the Colosseum in Rome and is a rectorate church , minor basilica and titular church named Titulus sancti Petri in vinculis of the Roman Catholic Church .

Floor plan of the basilica with apse to the east 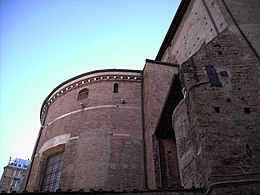 Main apse and northern side apse

General view of the interior

A predecessor of today's basilica was built around 400 on the foundations of a Roman villa from the 2nd century and an apsidic hall ( aula absidiata ) from the 4th century. It consisted of a three -aisled basilica without a transept , each with 15 columns and a sloping apse , but was destroyed before the year 435 for an unknown cause.

Using the outer walls and the apse of this first basilica was built under Pope Sixtus III. (432–440) the new building of a basilica with a transept and apses on the side aisles as well as a triumphal arch on antique granite columns, a Schola cantorum in the central nave and a vestibule. By installing a transept, the number of columns was limited to ten; They are ancient marble columns with hollow strips that support arcades. This floor plan with the flat apses on the side aisles, which were built here for the first time, and the novel arcade construction (instead of the previously usual architrave) served as models for other church buildings in the period that followed. The foundations discovered during excavations in the nave suggest that the presbytery was separated by barrier plates. This church was built by Licinia Eudoxia , daughter of the Eastern Roman Emperor Theodosius II and wife of the Western Roman Emperor Valentinians III. , significantly promoted and by Pope Sixtus III. consecrated in 439 or 440.

Einhard mentions the church in his Translatio et Miracula SS. Marcellini et Petri (“The transmission and miracles of Saints Marcellinus and Peter”): Directly next to it stood the house in which the unreliable deacon Deusdona had his residence Einhards, Ratleik, and his traveling companions apartment.

The importance of the basilica is indicated by the fact that papal elections took place there in 939 and 1073. As the titular church, it was included in the Roman station liturgy, which was celebrated from the 4th to the 17th century on the high feast days of the church year in various churches under the presidency of the Pope.

In the course of its history, the church underwent several renovations, in particular under the then titular cardinal Giuliano della Rovere, who was elected Pope Julius II in 1503 , in Renaissance forms and most recently by Francesco Fontana in the late Baroque style. It is the religious order of the Augustinian Canons of the Lateran . On May 8, 2011, the new title holder Donald William Cardinal Wuerl took possession of his church.

The first basilica from around 400 was called the Ecclesia Apostolorum . This name was initially also used for the new building by Pope Sixtus III. adopted, as is evident from the Roman Synodal Acts. In the Liber Pontificalis the new designation ecclesia a vincula sancti Petri is mentioned for the first time for 501–502 , from which it is inferred that the original consecration to the two princes of the apostles Peter and Paul has now been traced back to Peter alone. The relics of the dungeon chains of St. Peter are mentioned in this church in historical sources as early as the late 5th century . After changing the use of the old and the new name (595), the current name finally established itself in the 8th century.

The name of the church is derived from the chains (Latin / Italian vinculi / vincoli ), which are kept in a glass container under the altar . The pilgrims venerate them as those with whom Peter was chained in Jerusalem until his miraculous liberation ( Acts 12,6.7  EU ), and at the same time as those whom he carried in the Mamertine prison in Rome. The bandages that Peter is said to have received because of the injuries caused by the chains, he is said to have lost at the place where the church of Santi Nereo e Achilleo stands today.

According to legend , Empress Aelia Eudocia received the Jerusalem chains from Patriarch Juvenal during a pilgrimage to the Holy Land and gave them to her daughter Licinia Eudoxia . It showed it to Pope Leo I , who compared it with the Mamertine necklaces kept in Rome. The two chains joined together miraculously, and Eudoxia had the basilica built for them as a worthy repository of these Peter's relics. 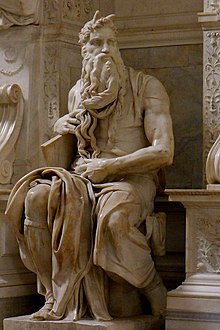 Detailed view of the tomb: statue of Moses

The church is best known for Michelangelo's tomb for Pope Julius II (1503–1513), who was previously its title cardinal. Originally about 40 larger than life figures were planned. The base of the monument was supposed to be surrounded by allegories of the arts and sciences and slaves as symbols of the subjugated provinces; above that, four seated figures were originally planned around the sarcophagus . In 1506 Julius II dropped the plan and Michelangelo left Rome. In 1508 he returned and began with the ceiling frescoes of the Sistine Chapel . When Pope Julius II died in 1513, Michelangelo devoted himself again to the tomb. The bonded slave and the dying slave as well as the central figure of Moses emerged .

The statue of Moses is considered to be one of the most important works by Michelangelo. It shows Moses returning from Mount Sinai with the tablets of the Ten Commandments at the moment when he meets the Israelites dancing around the golden calf . The horns on his head go back to a translation error: In the original Hebrew text, which has no vowels, there is the word "krn". When you later start adding vowels to the text, insert two “e”. “Krn” becomes “keren” and that means “horned”. This version lasted for centuries and is also adopted in the Vulgate , from which Michelangelo draws his knowledge. By comparing it with other texts, you can see much later that the correct two "a" must be added. The word is then called “karan” and means “shiny”, and the somewhat puzzling passage from the Bible gets a different, understandable meaning.

Michelangelo's biographer Giorgio Vasari sums up the contemporary judgment on Moses 1568 in the second edition of his biography as follows:

"When Michelangelo had completed Moses, there was no work to be seen, whether ancient or modern, that could stand alongside."

Moses was planned as a corner figure on the level of the sarcophagus. This position also explains the body rotation and the physiognomic drama, which is calculated to act at a distance. Up close, the head gets the fearsome expression that has solidified itself in Michelangelo's characterization as a master of terribilità , the “awe-inspiring force”. This unplanned list also influenced Goethe's impression, who wrote in 1830:

“I can't think of this hero other than sitting. Probably the overpowering statue of Michelangelo on the tomb of Julius the Second has seized my imagination in such a way that I cannot get away from it. "

The position and details of the statue have given rise to numerous attempts at interpretation. Even Sigmund Freud , the founder of psychoanalysis , dealt extensively with the statue and published in 1914 an anonymous treatise on ( The Moses of Michelangelo ). The essay was written immediately after the conflict with his “renegade” student CG Jung . In this respect, one can see in this interpretation of the sculpture “a moment of Freud's identification with the mythical figure of Moses”. In his treatise on Moses, Freud describes several explanatory approaches and comes to the conclusion that the dynamics in the Carrara marble picture result from a sequence of movements. Moses rises to dance around the golden calf to raise his voice and hand; the tablets of the law threaten to slip away from his other hand. In the movement of lifting the movement goes back to a sitting movement, because Moses tries - like every person in such a situation - to get a grip on the boards again. Freud shows this movement in sketch form. The movement is, so to speak, frozen in the marble.

On the left aisle wall are the epitaph and grave slab of Nikolaus von Kues ( Cusanus ) (1401–1464), the basilica's then title cardinal . The son of a merchant and fisherman from Bernkastel-Kues on the Moselle, who called himself Nicolaus Treverensis , is considered the most important theologian and philosopher of the 15th century. He was a prince-bishop of Brixen , papal legate and cardinal and vicar general in the Papal States . He was buried in S. Pietro in Vincoli; According to his last will, his heart was buried in the chapel of the St. Nicholas Hospital in Bernkastel-Kues, which he founded .

The epitaph is part of the original funerary monument, an early work (1465) by the important sculptor Andrea Bregno in Rome. On the large-format relief plate , the titular saint Peter is shown on a throne chair, holding a key and book in his right hand and the stripped chain with which he was tied in his left. On both sides the praying Cardinal Nikolaus von Kues kneels (with the cardinal's hat in front of him) and an angel (with the end of the chain of Peter).

Tomb of the Pollaiuolo brothers

To the left of the entrance, under a fresco from the school of Antoniazzo Romano , which shows Sixtus IV and a plague procession, is the grave of the brothers Antonio and Piero del Pollaiuolo . It was designed by Luigi Capponi after Antonio's death in 1498 and shows the busts of the two artists side by side in two oval recesses. The inscription indicates that Antonio Pollaiuolo created the tombs of Innocent VIII and Sixtus IV in Old St. Peter.