Antonio de Cabezón (born March 30, 1510 in Castrillo Matajudíos near Castrojeriz , † May 26, 1566 in Madrid ) was a Spanish composer and organist . He is considered the most important Spanish composer for keyboard instruments of his time. 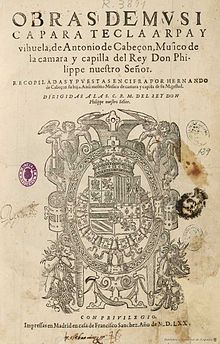 Antonio de Cabezón has been blind since childhood . He was trained in Palencia by the organist García de Baeza. As the court organist of Charles V and later Philip II , he made two trips across Europe (from 1548 to 1551 and from 1554 to 1556) and met important musicians from other courts. There were obviously mutual influences, so that Cabezón was able to make a significant contribution from Spain to the development of music for keyboard instruments. After his marriage around 1538, he moved to Ávila , the city of his wife's birth. His five children later held high positions at the Spanish royal court under Philip II. When Madrid became the seat of the royal court and the Spanish capital, he moved there and stayed there until his death.

His works include numerous intabulations , i.e. arrangements of polyphonic vocal music for keyboard instruments (especially of Josquin Desprez 's works), a number of tientos that follow this style, and also variations ( diferencias ) on popular dance pieces. A further developed polyphony and his own writing style for keyboard instruments can be recognized in his music, although the pieces could also be used for playing the harp or vihuela .

His collected works were published by his son Hernando in 1578 under the title Obras de música para tecla, arpa y vihuela (Madrid, 1578), so that they could serve as a model for the following generations of organists. In 1557 Luis Venegas de Henestrosa had already published 40 works by Cabezón in a collection. In total, these collections contain around 275 compositions.