Self-portrait integrated in the crucifixion panel on the back of the high altar, 1516 ( Freiburg Minster )

Hans Baldung postage stamp from Baden 1948, based on the self-portrait from 1534

Hans Baldung (* 1484 or 1485 in Schwäbisch Gmünd ; † September 1545 in Strasbourg ), also known as Hans Baldung Grien after the color he preferred, was a German painter , draftsman and engraver at the time of Albrecht Dürer , who also designed numerous woodcuts and made stained glass . He is one of the outstanding artists of the Renaissance in German-speaking countries.

Hans Baldung was born in the former Free Imperial City of Schwäbisch Gmünd . Although he came from a family of scholars who had moved to Strasbourg around 1490 , he probably began his apprenticeship at the age of fifteen in the workshop of a Strasbourg master.

In 1503 Hans Baldung immigrated to Nuremberg in order to develop himself further with Albrecht Dürer . Here he was given the nickname "Grien", according to legend, "the green one", because he liked to wear green clothes and generally preferred the green color; in this way they wanted to distinguish him from the other journeymen in the workshop with the names Hans, Hans Schäufelein and Hans Süss von Kulmbach . He became Dürer's most important employee and headed his workshop during Dürer's absence. He remained lifelong friendship with the 15-year-old when he left Nuremberg in 1506. Dürer held him in high regard and, for example, gave the painter Joachim Patinir the “Grünhansen's thing” on his trip to the Netherlands in 1521 , which means woodcuts made by Baldung in Dürer's workshop. Even during his lifetime he was seen as the real successor of Dürer and after his death received a lock of Dürer's hair. Towards the end of his time in Nuremberg, he was allowed to carry out his first commission in his own name, namely the production of two winged altars as initial fittings for the Maria Magdalena chapel of the bishop's residence on the Moritzburg in Halle / Saale, which was then carried out from 1608 to 1838 in Hallesches Dom stood; there were the three king altar from 1506 and the Sebastian altar from 1507.

In the spring of 1509 Baldung returned to Strasbourg and acquired citizenship there. In 1510 he was accepted as a master by the “zur Steltz” guild and opened his own workshop. He married Margarete Herlin, the daughter of a wealthy citizen and enjoyed growing popularity and increasing demand as a painter. He began to sign his works with the monogram HBG in ligature , which he mostly used for the rest of his creative period. His style became more and more mannerist .

In 1512, Hans Baldung was commissioned by the Münster keepers in Freiburg im Breisgau to design a convertible altar for the recently completed late Gothic choir of the Minster of Our Lady , consisting of four panels with a scene from the life of Mary (when closed), a central panel with the coronation of Mary and two wings with the twelve apostles (with the wings open), another painted back with the crucifixion of Jesus on the central panel and two saints on each of the two wings, plus a painted predella with the portrait-like busts of the cathedral caretakers in prayer before Mary as the patroness of Münster. This altar was to be the high point of his early work and also his main work. For this reason he moved to Freiburg with his wife and set up his workshop in the local barefoot monastery of St. Martin . During his time in Freiburg until 1518, he made several altars and devotional pictures, woodcuts and designs for church windows, etc. a. for furnishing the chapels of noble families in the ambulatory of the cathedral as well as for the series of glass windows of the Freiburg Charterhouse .

Because of the plague ruling in Strasbourg, Hans Baldung did not return to Strasbourg until 1518, where he again acquired citizenship. He achieved high social prestige and prosperity in Strasbourg. From 1533 to 1534 he held the office of lay judge in his guild and even became a councilor in 1545, the year of his death.

Hans Baldung created numerous altarpieces by 1520. After that, major church commissions declined, so that he worked more and more for private art lovers, which had an impact on the subject matter of his pictures. Religious pictorial themes still appear in his post-Reformation oeuvre, mainly Madonna and devotional images; however, new topics were also added, including beauty and death, witches, horses, history and genre pictures and portraits . In his works from the late period, it becomes particularly clear that Hans Baldung lends the previously customary pictorial motifs new accents in terms of content and seeks stronger artistic expression. The Karlsruhe sketchbook with more than 100 silver pen drawings from the period between 1511 and 1545 deserves a special mention .

A favorite subject was the beauty and eroticism of naked people, especially women. Baldung created a beauty cult in numerous variations for which there were hardly any predecessors in Germany. The woman is portrayed as Eve , an ancient goddess , a witch or a seductress. Often, however, these embodiments of blooming life stand in contrast to the memento mori , the threat of inevitable death in the form of gruesome skeletons. The aspect of eroticism is also reflected in an examination of ancient erotic texts. Baldung's painting Death and the Maiden from 1517 is considered to be the earliest pictorial representation of pubic hair in modern European times .

Baldung often portrayed witches, a topic that was very much noticed in Strasbourg at the time. The Strasbourg humanists studied witchcraft and the Strasbourg bishop was involved in the witch hunt. Typically these paintings were small-format, a series of enigmatic, often erotic allegories and mythological works. Baldung's interest in witchcraft continued until the end of his career. From 1510 he created numerous works in which witches are depicted lascivious, seductive and at the same time evil. These works were not only copied en masse as woodcuts, but were also intended as pen drawings for individual clerics, such as the New Year's greeting from 1514 (Musée du Louvre, Paris).

Baldung's images of horses leave the sacred motifs behind. A sophisticated perspective study with a horse and groom, which was made around 1544, serves as an example. The shortened body of the man in armor lies stretched out on the floor in front of a stable. The rising image space is constructed as a stage. On the threshold to the next room stands a mare who seems to have struck the man down and looks at him maliciously. On Picasso's masterpiece Guernica , a screaming horse appears, which Picasso took over from Hans Baldung, as does the old witch's torch at the top right of the picture. In a woodcut sequence with wild horses from 1534, excited stallions bite each other in the neck while fighting for a mare and attack each other. In the Renaissance, horses symbolized the instinctual nature of humans.

In the tradition of his role model Albrecht Dürer, Hans Baldung began portraiture very early, albeit in his own very self-confident style. His first work was a self-portrait , which he probably made at the beginning of his journeyman time in Nuremberg (around 1503) with a pen and brush in front of a mirror. In the Strasbourg period from 1518 onwards, he received his commissions mainly from noble families, the educated Strasbourg bourgeoisie as well as from the so-called Old Believers and the Reformed . Recognized portraits from the years 1513 to 1538 include:

• 1515 portrait of Count Christoph I of Baden (Alte Pinakothek Munich)

Only five real self-portraits by Hans Baldung are known:

In his graphic work there is also a self-portrayal as a voyeur on the first sheet of the woodcut series “Wild Horses” from 1534 (Germanisches Nationalmuseum Nürnberg).

Inscription panel with the name of the painter, predella on the reverse

In the first years of his independent activity, Hans Baldung signed his works with the simple monogram * HB * (Hans Baldung), and from 1510 with the unmistakable ligated * HBG * (Hans Baldung Grien). The signature is often integrated somewhere in the picture, sometimes on a small board and with the date. One gets the impression that he used his monogram not only as a label, but also as advertising, for example when he inserts his own scene in the middle of the picture, as in the case of the little boy with a monogram on the Freiburg crucifixion board (1516) or the monkey with a monogram in the first woodcut of the series with the wild horses (1534). In the case of the Freiburg high altar, Hans Baldung even uses a caption on the back of the predella with the minster caretakers, including the crypto signature in the name of the minster attendant Nikolaus Scheffer, to refer to his work: “Johannes (Baldung) created this work - in the year of salvation, 1516 "; and the text on the inscription panel in the right gusset of the predella is even clearer, where it translates as: "Hans Baldung called Grien, the Gmünder, created this with the help of God and out of his own ability". 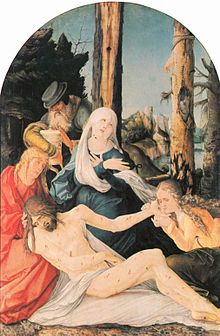 The Lamentation of Christ, around 1516 (Gemäldegalerie Berlin)

Cupid with arrow, remains of a mythological depiction, around 1530 (Augustinermuseum Freiburg)

Holy family in the room with five angels, around 1507 (Kreuzlingen / Switzerland)

In addition to the graphic works, portraits and self-portraits listed above, there is a compilation of the most famous paintings by Hans Baldung, listed according to their storage locations: