Red Hat Linux [ ɹɛd hæt ˈlinʊks ] ( RHL ) was one of the most famous Linux distributions for several years . It was compiled by the Red Hat company. It was discontinued in September 2003 and merged with the Fedora Project and Red Hat Enterprise Linux . The direct successor is Fedora, which developed its first version on the basis of Red Hat Linux 9 .

Version 1.0 was released on November 3, 1994. RHL is not quite as old as Slackware , but older than most other distributions. The RPM package format was developed for RHL and is now used by most commercial distributions to distribute software packages in addition to the DEB package format. Various other distributions originally began their history as a branch of Red Hat Linux, such as: B. the desktop-oriented Mandriva Linux (originally no more than a "Red Hat Linux with KDE "), Yellow Dog Linux (actually a "Red Hat Linux with PowerPC support"), Red Flag Linux , Aurox Linux or ASPLinux .

Red Hat Linux has traditionally been developed exclusively within Red Hat, the only feedback from users being their bug reports or contributions to the open source software packages it contains. This changed on September 22, 2003, when Red Hat brought its private customer activities and thus Red Hat Linux into the community-based Fedora project. This step laid the foundation for an open, closely interlinked development model with the community for a new distribution, which will in future be the basis for other Red Hat products. At the same time it was decided to only offer an enterprise version of the commercial distribution and to discontinue Red Hat Linux in favor of Red Hat Enterprise Linux on the one hand and Fedora on the other.

Special features of the distribution 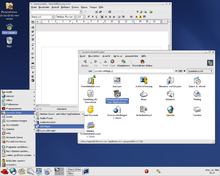 Red Hat Linux was installed with a graphical installer called Anaconda , which is easy to use even for beginners. The built-in Lokkit tool was used to configure the integrated firewall . The desktop design was dominated by the much praised and criticized Bluecurve desktop theme , which should enable a uniform look and feel under Gnome and KDE .

The 1995 Red Hat Linux 2.0 developed RPM Package Manager , originally R ed Hat P ackage M anager was said, was for all subsequent RHL versions for package management responsible. RPM was used by numerous other Linux distributions , such as B. SUSE , Mageia or Mandriva Linux and is now part of the LSB standard. Some Unix systems such as B. IBM AIX or Solaris as well as non- Unixoid systems like Novell NetWare used RPM.

Since Red Hat Linux 8.0, Red Hat had switched to only including software that was completely free . For this reason, for example, the ability to play MP3 files or to access NTFS partitions was lacking, as these contained patented processes. Another special feature was the changeover to UTF-8 with Red Hat Linux 8. Red Hat Linux was thus one of the first distributions to consistently rely on this character encoding and Unicode.

Red Hat Linux indirectly shaped the further development of many other Linux distributions of that time through its innovations .

The release dates refer to the public announcements in the newsgroup comp.os.linux.announce, and not to the actual availability in stores. For more information on version names, see Fedora and Red Hat version names .

The end of Red Hat Linux

At the end of April 2004, Red Hat ended support for all Red Hat Linux versions in order to concentrate fully on the corporate division and RHEL. Fedora Core 1 emerged in 2003 from the code base of RHL 9. The Fedora project ensured that the existing RHL versions were supplied with patches free of charge until 2006 by Fedora Legacy . In addition, after purchasing a Progeny license , Red Hat offered support for RHL 8 and 9 until 2011.