The SUSE Linux GmbH (now a subsidiary of SUSE GmbH) sales in the early 1990s under the company name S.uSE GmbH (society for software and system development mbH), the Linux - distribution Slackware , in-house development already YaST was offered as a configuration program . In May 1996 the independent distribution SuSE Linux, developed on the basis of jurix , was published for the first time with the version number 4.2. The numbering refers to the number 42 from the novel The Hitchhiker's Guide to the Galaxy , which is considered to be the answer to the question "about life, the universe and all the rest".

With version 5, a version of SuSE Linux, optimized for major customers, appeared in June 1997 as a so-called business Linux product , which offered longer release cycles and extended support, and whose concept is being continued by SUSE Linux Enterprise Server (SLES). SuSE Linux was in addition to the Intel - 80386 platform from version 6.1 on the DEC - Alpha AXP platform, version 6.3 on the PowerPC porting platform. In the further course versions for AMD Athlon 64 , Intel Itanium and IBM -S390- (Z-Series) systems were added.

For end users , three product lines were offered in versions 7.0 up to and including 9.1: 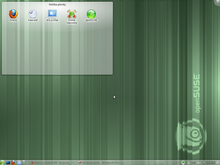 In November 2003, the American software company Novell took over SUSE Linux GmbH, changing the name of the distribution from SuSE to SUSE from version 9.1 onwards. The takeover went hand in hand with further innovations such as the ability to install the operating system over the Internet via FTP , software offerings for 64-bit systems ( AMD64 and Intel 64 CPUs) and the release of YaST for the GNU General Public License . The innovations introduced by Novell also included the greater weighting of the Gnome desktop compared to the K Desktop Environment , which were offered equally as a pre-selection for the desktop environment .

For SUSE 9.2, comprehensive ISO images of the distribution were offered for download for the first time and the personal version was discontinued. The reduced campus version and the cheaper update package were sold up to and including version 9.3. As of version 10.0, the various product lines have been completely discontinued. From version 11.2 KDE Plasma Desktop is again the preselection for the desktop environment. Gnome is still offered.

With the creation of the openSUSE project, the development of SUSE Linux was made public, which means that users can also test the alpha and beta versions of SUSE Linux and report any bugs found in a public bug tracker . Furthermore, you can actively participate in the development of the project by contributing patches to existing packages or by contributing to the writing of the openSUSE documentation.

The first final version created with the participation of this project could either be downloaded as a complete open source distribution without any proprietary software ( SUSE Linux OSS 10.0 ) or it could be downloaded or bundled with proprietary software such as Adobe Reader and Flash Player as well as MP3 players purchased ( SUSE Linux 10.0 Eval ).

Since May 11, 2006, the "OSS" has been removed from the name. Furthermore, only versions are published that contain exclusively free software and drivers. However, up to and including version 11.0, proprietary software was still carried in a separate directory.

With the release of version 10.2 on December 7th, 2006, the name of the distribution was changed from SUSE Linux to openSUSE to reflect the influence of the project and to avoid confusion with the commercial offshoots.

On April 27, 2011, Novell was taken over by the American software company Attachmate , with some of Novell's patents being sold to a Microsoft- led consortium called CPTN Holdings.

At the end of January 2014, SUSE employee Michal Hrušecký announced that the employees employed by SUSE for the development of the openSUSE distribution would temporarily turn to other tasks within the openSUSE project, as a result of which the release of version 13.2 was postponed from July to November 2014. Significant innovations are the Btrfs / XFS file system established in SUSE Linux Enterprise and the current version of KDE Plasma 5 , which, however, must be installed from the repositories.

At the same time, the project gave up its distribution variant, previously called Tumbleweed . The name was retained for the rolling release , which is generated from the development branch ( factory ) using snapshots that have been tested with openQA . Unlike other distributions, Tumbleweed is a tested rolling release , which is very good for stability.

For the version released in autumn 2015, the development team has agreed on the name openSUSE Leap with the different version number 42.1. As in openSUSE Version 4.2 of May 1996, which was then called SuSE Linux, the number 42 refers to the question about "after life, the universe and all the rest" of the book series The Hitchhiker's Guide to the Galaxy . In the future, the substructure will consist of software components that use the latest SUSE Linux Enterprise ; The project wants to take over desktop surfaces and applications from Tumbleweed , the rolling release edition of openSUSE.

At the openSUSE conference held in Nuremberg in 2016, statistics were announced that the number of users has increased since the conceptual reorientation with openSUSE Leap 42.1. According to this, the number of downloads is 400,000 DVD images per month and the trend is rising. Every month there would be 1,600 installations added and 500,000 packages installed. The number of Tumbleweed users is 60,000, half of whom update frequently . This means that the number of tumbleweed installations has doubled in the last year.

Another thing you can see from the statistics is that most installations are done from DVD images. The dominant architecture is x64 . According to these figures, the geographical distribution of users has hardly changed. A third of the users are from Germany, 12% are in the US, 5% in Russia and 3% in Brazil.

Special features of the distribution

A significant feature of the distribution is the in-house installation and configuration tool YaST (“Yet another Setup Tool”), which is a central tool for installing, configuring and administering the system. The program also provides a convenient way to search for packages.

The tool zypper , which has been used as a backend for package management since openSUSE 10.2, enables the resolution of dependencies, the installation and removal of packages and update management. Zypper also offers solutions to satisfiability problems and SAT problems . The installed repositories in zypper are synchronized with those in YaST, since YaST itself also uses libzypp as the package management engine.

Up to version Leap 15.0 YaST offered a clear software selection structured in a topic tree based on the RPM groups. It was ideal for discovering new software on specific topics. With this, Suse stood out positively from many software management tools from other distributions. From version Leap 15.1 onwards there are only flat, unstructured package groups.

The build service enables developers and users to package software for openSUSE and thus integrate it firmly and automatically into openSUSE. This allows openSUSE to provide a large amount of software and different versions.

OpenSUSE is traditionally a KDE- centric distribution. Its desktop environment, based on the Qt library , has been installed as the standard desktop environment since the late 1990s. SUSE Linux GmbH supports the KDE project financially. After the takeover of SUSE by the software company Novell, which had previously bought the company Ximian (today's name: Xamarin ) from the Gnome founder Miguel de Icaza , the emphasis on development work shifted more towards Gnome. As of openSUSE 10.3, Gnome and KDE Plasma Workspaces were now available as equivalent options on those installation media that contained both platforms . From version 11.2, KDE is the standard interface again. In addition to live DVDs provided as installation media, the only one of these included two desktop environments. Additional desktop environments such as Blackbox , IceWM , LXDE , LXQt , Openbox , Window Maker and Xfce are also supplied on the installation media .

Another special feature was the SUSE support database and the SUSE component database. Both provided extensive information and assistance for the installation and configuration of the system and the corresponding hardware. Above all, the hardware database has also been actively used by users of other distributions. Both mechanisms were also included on the distribution media and thus supplemented the product documentation. The support database (SDB) has been integrated into the openSUSE Wiki .

Since openSUSE 10.3, the distribution offers the option of installing openSUSE from an existing Microsoft Windows installation with the instlux migration aid .

A test framework called openQA has been established since openSUSE 12.1 for the quality assurance of the continuously worked development branch . Basic functionality, e.g. B. Whether the boot loader, kernel and window management start as well as whether the standard programs such as browser and word processing are working properly can be checked continuously. Both the automatic installation and test component and the web interface were published as free software under the GNU GPL .

GeckoLinux
available in the versions Static (based on openSUSE Leap) and Rolling (based on openSUSE Tumbleweed).
JackLab
with Enlightenment desktop, real-time kernel and software for musicians, media artists, producers of music (the project has been discontinued).
kmLinux
Distribution optimized for use as workstation computers in schools.
Linkat
Distribution of the Ministry of Education of the Generalitat de Catalunya, specifically for use in educational institutions.
Linux sample solution
Server version distributed by the Baden-Württemberg State Media Center for school use (up to version 2.3, 2007).
NetSecL
Live DVD focused on security.
openSUSE Education
an additional DVD for openSUSE containing over 100 applications for schools and universities.
openSUSE Medical
a distribution based on SUSE Studio for doctors, clinics and medical students.