Slackware [ ˈslækweə (ɹ) ] is the oldest active Linux distribution and the first to spread widely around the world. Because of this early success and the consistent avoidance of unnecessary ballast according to the KISS principle , Slackware formed the basis for other well-known distributions such as B. SuSE Linux . Slackware is intended for use with i486 -compatible (originally i386 -compatible) and x86-64 architectures, as well as Alpha and SPARC architectures. With Slackware ARM official port exists on the ARM architecture , Slack / 390 provides an official port for the mainframe architecture S / 390 and its successors such system . Slackware is mainly used in the professional environment.

Slackware is designed to be as similar to Unix as possible. All settings on the system can be made by the user by editing the configuration files. There are no official distribution-specific tools with a user interface for system configuration (such as YaST in openSUSE ). This would violate the KISS principle .

The publication takes place a new Slackware version always only then, when it is finished - that is, there are no set deadlines and no notice. Slackware uses Linux Loader (LILO) as a boot manager and has a BSD- like init process.

There are virtually no distribution-specific changes to the packages available, which makes it easier to translate and install your own software in contrast to other distributions. Slackware uses compressed tar archives as its package format; from version 13.0 these are compressed with the Lempel-Ziv-Markow algorithm instead of gzip ( * .txz instead of * .tgz). Due to the simple package structure, package dependencies are not checked by the system and the overwriting of files of packages already installed is not prevented. This is a major difference from the package managers found in many other Linux distributions. These properties enable the advanced user to use parts of more extensive software and to do without software that appears unnecessary or to make adjustments to the system without having to reckon with side effects due to inconsistencies in package management. The directory contains /var/log/packagesa list of the installed packages with descriptions of which files were installed with which package. With the command ldd(List Dynamic Dependencies), dependencies of dynamic libraries can be displayed, from which their necessity can be derived.

Slackware provides scripts for easy installation and configuration of the system. Current, security-relevant software updates can be imported from version 12.2 with the slackpkg program .

Since Slackware comes with a fairly minimalist package selection, there are various unofficial programs to be able to easily install additional software. Sbopkg is currently the most popular among these additional programs. It uses build scripts to compile software from its source code and create a package from it. There are also programs such as swaret and slapt-get . which can be used for software installations with dependency resolution, provided that appropriate packages and repositories are available.

The management of the software repositories is rather conservative. It is possible that a particular software will not be upgraded across multiple versions. 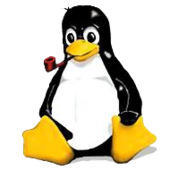 From the end of 1992, Patrick Volkerding tried to correct errors for Softlanding Linux System (SLS), the first comprehensive Linux distribution ever. After the results of this work became more popular in his environment, he published them on July 17, 1993 as a separate distribution under the name Slackware Linux 1.00 . A month later, Ian Murdock did the same with his first version of Debian , developed for the same reasons . The first part of the name, Slack, is derived from a belief principle of the religious parody Church of the SubGenius and stands for freedom, independence and original ideas that lead to the achievement of personal goals.

The first official version of Slackware consisted of 24 3.5 " floppy disks . The first 13 diskettes contained a DOS - emulator , the Linux kernel 0.99pl11 in an alpha version , the GNU Compiler Collection (GCC), version 2.4.5, and two Unix shells (pd) ksh and tcsh. The other eleven floppy disks contained drivers for graphics cards, an XFree86 system in version 1.3 and some graphics applications.

Slackware 1.1.1 consisted of 51 floppy disks and included a. XFree86 2.0 and a TeX installation. Slackware 1.2 included the Linux kernel version 1.0. At least 200 MB of hard disk space was required for the complete installation.

Slackware 3.0 was first released in Executable and Linking Format on September 30, 1995 and was available on CD-ROM from Walnut Creek (now the FreeBSD Mall). Version 3.1 released in July 1996 is also called Slackware 96 (as an allusion to Windows 95 ) and contained the Linux kernel in version 2.0. Slackware 3.6 required 500 MB hard disk space for the full installation.

After version 4.0, the version jumped to version 7.0 in 1999. According to Volkerding, the reason for this was the inflationary use of new version numbers in other distributions for marketing reasons and the constantly resulting inquiries "from people who don't know anything about Linux" when to upgrade or whether the components contained in Slackware are 3 versions older than anywhere else. A 2 GB installation partition is recommended for Slackware 7.0. With Slackware 7.1, Gnome also became part of the distribution.

With Slackware 10.0 2004 XFree86 was replaced by the X.Org server . Version 10.1 removed Gnome from the distribution again, and the migration to the Linux kernel series 2.6, which is optionally available from Slackware 10.2, began.

As of Slackware 13.0, the distribution is also available for x86-64 architectures under the name "Slackware64" . The 32-bit version is still called "Slackware". In addition, the previously used compression algorithm for Slackware packages will be changed from gzip to xz .

Slackware 13.1 removes support for the old IDE subsystem by using the 2.6.33 kernel series; from now on all hard disks are addressed under the device name / dev / sd *. KDE 4.4.3 also introduces its PolicyKit authorization service and the ConsoleKit session management system in special versions that are adapted to Slackware. This is particularly noteworthy because Slackware traditionally attaches great importance to making the smallest possible adjustments to the software supplied. The adjustments were necessary to support the shadow password method used by Slackware to protect passwords. In addition, support for laptops in particular is improved: a tickless kernel without regular timer interrupts is used; how often this is woken up can be determined with powertop . Furthermore, usb_modeswitch has been integrated and thus the temporary use of USB devices has been simplified.

In addition to a comprehensive update of the packages supplied, Slackware 13.37 contains significant innovations in the installation routine. Their hardware initialization is now done by udev . One advantage of this is that when installing via a network protocol, there is no need to configure the network card using older auxiliary scripts. Another new Slackware now supports GPT - partition tables during installation. Tools for managing the Btrfs file system are now also part of the distribution. Due to the update of X.org, HAL is no longer used for the recognition and initialization of the input devices. Instead, udev is also used here. Further innovations are the inclusion of ddrescue, rfkill and lxc, a system similar to chroot for the isolation of system processes and resources. Ultimately, however, it is much more powerful, which means that virtual systems can be operated with it.

Slackware ARM was founded in 2002 under the name "ARMedslack" and is an officially recognized port from Slackware to the ARM processor architecture . With the official recognition in 2009, the name was changed from "ARMedslack" to "Slackware ARM". The current version is 14.2. The ARM Versatile and Marvell's SheevaPlug platforms are currently supported. With the support of the ARM Versatile Platform, Slackware ARM can run on emulated hardware, e.g. B. run using QEMU , which simplifies the development for this platform.

Slack / 390 was founded in 2004 and is an officially recognized port from Slackware to the S / 390 architecture . The current version is 10.0. After the introduction of Slackware64, a 64-bit version was also created for the S / 390 successor architecture, the System z .