The Alpha Processor was a microprocessor that was developed by the former US computer company DEC and launched in 1992 under the name "Alpha AXP". He was a 64-bit - RISC processor, which was developed from scratch. Because there was no need to ensure compatibility with previous series, some of the techniques that were considered to be very advanced at the time, such as super scalarity, could be implemented without compromise. The Alpha processor was considered to be one of the most powerful and advanced processors on the market when it was released and for a few years afterwards. It achieved a certain distribution in the field of professional servers and high-performance computers, but in the PC field it could not even begin to assert itself against the market-dominating, but less powerful Intel architecture and remained a rare niche product .

The further development of the Alpha processors was discontinued in 2004 after the model EV7z. At this point in time, the company DEC no longer existed, as it had already been bought in 1998 by the PC manufacturer Compaq , and Compaq in turn in 2002 by Hewlett-Packard . Many engineers of the aborted Alpha EV8 development project then worked at Intel on the development of the Intel Itanium 2 -9300 high-performance processor, which was developed together with HP. The delivery of new servers with Alpha processors by HP ended in 2007. The company has meanwhile migrated practically all Alpha systems of its customers to Intel Itanium . 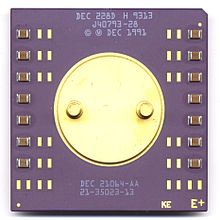 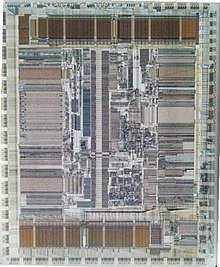 When DEC was launched in 1992, it assumed that this processor would be the technology leader for the next 25 years. At the same time, a roadmap for increasing clock rates was presented, assuming a 1 GHz clock in 2015. In fact, an Alpha processor was presented as early as 1999 that ran without a special cooling device at room temperature with a clock rate of 1 GHz. In the second half of the 1990s, systems with alpha processors were always well represented in the TOP500 list of supercomputers . In 2003, the ASCI Q, a supercomputer based on alpha chips, was in second place on the list. Cray installed alpha chips in both the Cray T3D (EV4) and the Cray T3E (EV5) model.

PCs should also be equipped with the Alpha processor (21164PC). However, these were not accepted by the market; only a few Alpha PCs were sold. In Germany v. a. the computer retail chain Vobis , which sold Alpha PCs twice:

In 1998, DEC was taken over by Compaq , and Compaq, in turn, was taken over by Hewlett-Packard in 2002, making the Alpha range part of HP. The company Stromasys emerged from the DEC European Migration and Porting Center . The company developed the Charon -AXP emulator , which can be used to replace the old Alpha servers.

Marketing failures on the part of DEC and later Compaq prevented a high number of Alpha servers. As a result - because of its low distribution - important software manufacturers stopped supporting the Alpha processor system. Compaq discontinued support and further development of Windows for Alpha systems in 1999 .

Therefore the alpha technology will be phased out or merged with Intel's Itanium by HP ; the entire Alpha processor production including the development department and many patents held by DEC in the field of semiconductor manufacturing was taken over by Intel in 1997. The DEC know-how then flowed into many newer Intel developments. HP , the new owner of Compaq, had only continued to sell Alpha servers, which were available with the Tru64 or OpenVMS operating systems, until 2007 and announced that they would support them until at least 2012/2013.

It was also the only processor that could be put together in direct toroidal structures of up to 128 computers without external bridge chips (NSEW architecture). 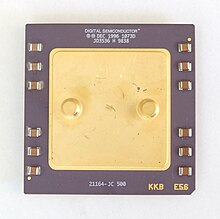 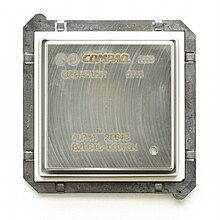 The processors all have a name according to the scheme “21 x 64 EV y ”. The 21 should stand for the 21st century, the technology should, according to the ideas of the designers, be decisive into the 21st century. The x indicates the generation. There were four generations that were given numbers from 0 to 3. The 64 is supposed to indicate the 64-bit architecture of the Alpha processors. "EV" stands for "Extended VAX". The Alpha CPU design was not a further development of the very popular VAX series, but a new development. The y distinguishes the processors in detail.

The Alpha AXP 21066A with 166 MHz or 233 MHz was a less powerful version of the 21064 processor and had a lower bus speed (it was installed in the low-cost computer "DEC Multia" or Universal Desktop Box, UDB for short).

The Alpha processor was a fundamentally new design; no compatibility with existing architectures was included. This cleared the way for a consistent design.

Alpha processors are RISC processors. Three features are implemented as essential points of the RISC architecture: All command codes are equally 32 bits wide, the memory is accessed exclusively via load / store commands (which have no other function apart from memory access) and various commands are only then depend on each other if they access the same registers or the same memory addresses.

The Alpha processor is a real 64-bit architecture, the use of 64-bit does not need to be activated by a mode. The alphas each have 32 integer and floating point registers with 64 bits each. Alpha chips are designed to work in multiprocessor systems and offer multiple support for this. In the instruction set of the processor there are also instructions for the optimization of the work, so the programmer can support the branch prediction and the cache management with instructions.

In addition, alpha processors were superscalar from the start . The first generation "Alpha 21064" could execute two commands in parallel in different units, later generations were even fourfold superscalar. Processing takes place in 7-13-stage pipelines, the exact number depends on the processing unit and the generation of the processor.

The most striking feature of the Alpha processors was their relatively high clock speed; the first alpha processors ran at 150 or 200 MHz as early as 1992. Intel's Pentium, on the other hand, only ran at 60 MHz when it was introduced in the spring of 1993. With the "Alpha 21264" generation, out-of-order execution was introduced for the Alpha. He was then able to change the order of the last 80 commands in order to optimize execution. This required numerous expansions in the architecture, for example a large number of temporary registers were introduced, and register renaming resolved any data conflicts that might arise.

Since frequencies alone do not characterize the performance of a system, some benchmark results from the SPEC (SPECint95, SPECfp95) are used here to roughly determine the performance . As we understand it, the SPEC benchmark not only measures the pure CPU performance, but also the performance of an overall system (CPU, integer operations , floating point arithmetic , bus, memory, program optimization , etc.). The benchmark conditions also change from time to time for good reason, so that a result can only ever be viewed as an approximate performance value. This compilation is intended to give a rough idea of ​​how the Alpha architecture (64-bit) compares to the contemporary HP- PA-RISC (64-bit) and the Intel-based systems of the time. The most remarkable result compared to Intel is that Intel comes quite close to SPECint performance, but falls far behind in SPECfp. In comparison to HP, it is noticeable that the PA-RISC architecture is roughly on par, but the HP CPUs achieve their performance with much lower clock frequencies.