The title of this article is ambiguous. Further meanings are listed under Cray (disambiguation) .

Cray Inc. is a company founded in 1972 by Seymour Cray under the name Cray Research .

The company manufactures supercomputers whose computing power is now in the PFLOPS range (1 PFLOPS = 10 15 floating point calculations per second). 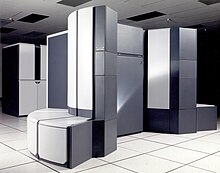 Cray XE6 in the HLRS

Cray delivered the first supercomputer in 1976 with the Cray-1 , a computer with a performance of around 133 MFLOPS . The Cray-1 had a word size of 64 bits and a memory expansion of one million words, which corresponds to a memory size of 8 megabytes. The cycle time was 12.5 nanoseconds , corresponding to a clock frequency of 80 MHz, which was extremely high for the time .

Until the mid-1980s, Cray only manufactured vector computers . The computing power of these computers lies neither in their clock frequency nor in the interconnection of several CPUs. Instead, the CPU has several vector registers which, in the case of Cray, can hold 64 values ​​at once. With several vector registers, instructions on 64 values ​​can be executed simultaneously within one clock cycle.

In 1993 Cray's first massively parallel computer, the Cray T3D , was shipped. The T3D was based on the Alpha processor from DEC and supported up to 2048 processors. The CPUs of the T3D and the successor model T3E were interconnected in the topology of a 3D torus .

Starting with the Cray-2, Cray delivered the Unicos operating system , a Unix- compatible timeshare operating system. This enabled users to work on the supercomputer itself in an environment they were familiar with from their desktop workstations .

In cooperation with Sun Microsystems , Cray developed the Cray CS6400 , a system with up to 64 SuperSPARC CPUs that could be dynamically divided into several partitions. The CS6400 was one of the first massively parallel systems to use a standard operating system (in this case Solaris ) and was therefore also suitable for use with business applications.

The first Cray machines were made using germanium - semiconductor technology. Due to the high level of waste heat, aluminum blocks through which the cooling liquid ran were clamped directly to the circuit boards. Later machines (including the Cray-2 , Cray-3 , Cray-4 and Cray T90 ) were immersion cooled: the circuit boards floated in a bath made of Fluorinert ( perfluorocarbon ), an electrically non-conductive cooling liquid. A well-known quote goes that Cray is basically a refrigerator company.

Physical requirements for a supercomputer also dictated other parts of the design. With the Cray-1, the uniform length of the connecting cables between the individual circuit boards had to be precisely adhered to in order to ensure correct timing. The solution was a housing in the design of a column with a round seating group facing outwards: the column contained the circuit boards, while the bench housed the cooling units. The Cray-2 was also built in a columnar shape to ensure minimal paths between the individual components of the computer. These features made Cray a cult , a Cray machine was just different .

In March 2000, Cray Research was sold to Tera Computer Corporation , which was renamed Cray Inc. after the sale was completed on April 4, 2000. Since then, supercomputers have been manufactured again under the Cray name.

In 2004 the Red Storm system (now 204.2 TFLOPS ) was completed for Sandia National Laboratories . The architecture used in it for supercomputers was introduced commercially in Cray XT3 and further improved with Cray XT4 and Cray XT5 . A corresponding “Jaguar” system from Oak Ridge National Laboratory took 6th place on the TOP500 list of supercomputers in June 2012 with a speed of around 1,941 petaflops . Also in June 2018, a Cray XC50 computer at the Swiss National Supercomputing Center was in 6th place with 25.3 PFlops.

The technology of the Cray CS6400 was further developed by Sun Microsystems and forms the basis of the Sun E10000 .

In 2019, Hewlett Packard Enterprise (HPE) acquired Cray. For this, 1.4 billion US dollars were offered.

(2000 – present; result of the merger between Tera Computer Company and Cray Research)