Silicon Graphics International ( SGI ) was a manufacturer of computers that are particularly powerful in the area of graphic display (graphics workstation ). SGI initiated the OpenGL specification and is a member of the Architecture Review Board of OpenGL. OpenGL is still a registered trademark of the company today.

The company was founded by Jim Clark in November 1981 under California law and moved to Delaware in January 1990 . The company exploited Clark's method for the accelerated display of three-dimensional images using specialized software and hardware, so-called geometry pipelines . From 1982 SGI manufactured graphics terminals, but later moved to other business areas.

The first manufactured terminals should at DEC - VAX Computers are connected. SGI used Motorola 68000 microprocessors with a UNIX port from UniSoft as the operating system under the name GL2 to control the terminal. Later systems used IRIX, a proprietary variant of the Unix operating system; the current product series are designed for operation under Linux .

The 3X30- workstation was able, without the support of a large computer a complete 3D computer animation to render . The workstation was equipped with two 300 MB hard disks , which were large for the time , a tape drive and a 10 MBit network adapter .

With the introduction of the 4D series in 1987, SGI switched to using MIPS - RISC microprocessors. This increased performance, more memory could be addressed, and the mathematical calculations could largely be carried out using the hardware . With this series, SGI acquired the reputation of the best-known manufacturer of graphics workstations for rendering cartoons and animations.

In February 1996 SGI bought the company Cray Research and exploited the rights to names such as "CrayLink" for their own ccNUMA technology. The Cray technologies only flowed into the following series, the Origin 3000 . After the Cray name was resold to Tera Computer , which promptly renamed itself Cray Inc. , CrayLink was renamed NUMAlink .

With the enormous technical development of desktop PCs and their graphic capabilities, SGI had specialized in the manufacture of servers for digital video and web servers . The own CPU architecture MIPS was no longer developed, as was the own Unix derivative IRIX . The IRIX file system XFS was released as Open Source / GPL .

In 2009, Rackable Systems took over SGI after bankruptcy.

On November 1, 2016, Hewlett Packard Enterprise (HPE) took over Silicon Graphics International for $ 275 million, adding to its portfolio in the field of high-performance computing. 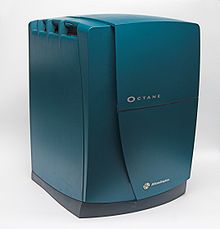 Before the company got into economic trouble, it successfully manufactured high-end graphics workstations. SGI servers and workstations with a MIPS CPU ran under the IRIX operating system . The best known computers from SGI include the " Indy ", " Indigo ", "Indigo2", " O2 ", " Octane ", " Octane2 ", "Fuel", "Tezro", " Onyx " and " Origin " models .

With the Origin 2000 model , which was introduced in 1996, SGI presented its first ccNUMA system. The ccNUMA technology allows the construction of computer systems with a large number of processors, with the Origin2000 up to 512 MIPS R10000, R12000 or R14000. Since then, all SGI computers with more than two processors have been based on ccNUMA technology.

If an Origin 2000 is coupled with one or more InfiniteReality graphics modules to form a "graphics supercomputer", an Onyx2 is created . These systems were widely used in film and video production, in simulation environments or in measurement data analysis.

SGI supported the development of the Linux operating system by supporting numerous projects such as Samba and providing code as open source , including B. the file system XFS . This support has intensified with the introduction of servers with CPUs from the Intel / IA64 architecture. These servers, called Altix , are based on the same NUMAlink technology as the Origin 3000 systems, but are equipped with Intel Itanium or Itanium 2 processors instead of MIPS R14000 / 16000 CPUs . The largest Altix can contain 512 Itanium-2 processors.

Although the company has focused on the server market since its economic troubles and thus left the graphics workstation business, SGI servers showed remarkable graphics performance. Originally, graphics extensions were also available for the Altix systems, which enabled them to be expanded into a Prism system. With Prism systems, the multiprocessor technology made it possible to create real-time 3D animations (using methods such as ray tracing ), which were too time-consuming for calculation with graphics cards common at the time.

In February 2006 it became clear that SGI was struggling with severe funding difficulties. The company reported to the SEC that it was on the verge of bankruptcy. On May 8, 2006, it was announced that SGI had filed for bankruptcy protection in the New York bankruptcy court. On October 17, 2006, after less than six months, the company was able to free itself from bankruptcy protection. However, the company stopped the production of the operating system IRIX on December 29, 2006 and in future concentrated on the business with the servers operated under Linux .

On April 1, 2009, SGI again filed for bankruptcy protection under US Chapter 11 law . Rackable Systems took over the insolvent company and has been operating as Silicon Graphics International since May 2009.