The Sun Microsystems, Inc. [ ˌsʌn maɪkɹoʊˌsɪstəmz ] was a manufacturer of computers and software , which in 2010 through acquisition in the Oracle Corporation was incorporated. Spin-off from Stanford University in 1982, Sun was an independent company until then and based in Santa Clara , California . The company initially focused on the development and manufacture of Unix - workstations , a wider public was there mainly by the development of the end of the 1990s, Java technology and the programming of the same name known. 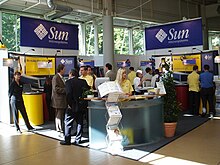 Sun Microsystems at the Linuxtag 2004 in Karlsruhe

Sun was founded on February 24, 1982 by the German Andreas von Bechtolsheim and the Americans Bill Joy , Vinod Khosla and Scott McNealy , but the company was not officially registered until May 16. The name derives from Sun S Tanford U niversity N etwork from, a former project to network the library computer at the Stanford University .

In 1984 Sun developed a network file system called NFS . This was placed under an open source license, which made it a great success in the Unix world and is still very important today. Other projects for the Unix area such as NeWS , conceived as an alternative to the X Window System , had among other things. a. Hardly any success due to the non-public source code.

The early computers of the Sun-1 , Sun2 and Sun3 series were equipped with processors from the 68000 family from Motorola (CISC-CPU) and ran under the SunOS operating system , a BSD-4.3 derivative. With the Sun SPARC processor developed Sun a very powerful RISC - CPU for their own workstations and servers Sun 4 -series, on which the operating systems SunOS and later Solaris running.

In 1999, Sun bought the Star Division company with the StarOffice office suite , which was released under a free license ( LGPL ) as OpenOffice.org in 2000 and was quickly adopted by developers from the open source community. In May 2005, Sun acquired the software company Tarantella . In April 2006, Sun Germany completed the acquisitions of StorageTek and SeeBeyond . On April 24, 2006, the company announced in a press release that the previous CEO Scott McNealy would be replaced by Jonathan I. Schwartz , who had joined Sun after the 1996 acquisition of Lighthouse Design .

At the beginning of 2008, Sun took over the company MySQL AB , which until then had developed the open source database MySQL and marketed it commercially, for around one billion dollars . Innotek, the manufacturer of the virtualization solution VirtualBox , followed shortly afterwards .

According to a report in The Wall Street Journal , IBM planned to take over Sun Microsystems for 6.5 billion US dollars, but negotiations failed.

Sun logo before the takeover by Oracle

On April 20, 2009, Oracle announced the acquisition of Sun Microsystems for $ 7.4 billion. On August 20, 2009, Oracle announced that it had received approval to acquire Sun Microsystems. The US Department of Justice approved the information reportedly the takeover by Oracle without restrictions . After an initial review, the EU Commission announced on November 10, 2009 that it saw competition law problems in the database market. She therefore expressed concerns about the takeover of Sun Microsystems by Oracle. In January 2010, the EU Commission approved the takeover without any conditions. The world market leader for commercial databases, Oracle, took over the leading provider of open source databases (MySQL) and Java. As a direct effect of the acquisition, numerous open source projects have turned away from Oracle.

For the fiscal year ended in June 2009 Sun had to post a loss of 2.2 billion dollars. Previously, within three years, 7,600 jobs had been cut, and a further 3,000 layoffs were planned, which should also affect European branches.