An ambigram (from Latin ambo 'both' and Greek gramma 'writing') is commonly referred to as a lettering or a symmetrical symbol that, when rotated through a certain angle (usually 180 °), results in a lettering or a symbol. In the literal sense, it is therefore a question of writing that can be read from both given angles. 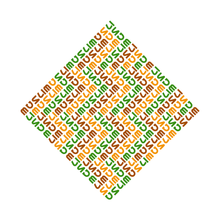 The entire meaning of the term ambigram goes beyond the general designation, as Douglas Hofstadter defined in 1987 as follows:

“An ambigram is a visual pun of a special kind: a calligraphic design having two or more (clear) interpretations as written words. One can voluntarily jump back and forth between the rival readings usually by shifting one's physical point of view (moving the design in some way) but sometimes by simply altering one's perceptual bias towards a design (clicking an internal mental switch, so to speak). Sometimes the readings will say identical things, sometimes they will say different things. "

“An ambigram is a special kind of visual play on words: a calligraphic work has two or more (clear) readings. It is possible to switch between the different interpretations by changing the physical point of view (movement of the calligraphy), but sometimes a rethink is enough (so to speak, flicking an inner, mental switch). The readings are either identical or contain different statements. "

Ambigrams, in which a 'mental switch' has to be thrown to enable a different reading, is the calligraphic equivalent of the toggle figure .

Ambigram can also be defined as a typographical creation that allows two or more interpretations of a lettering.

A special form is the spinonym (derived from English (to) spin ' to rotate'), in which the individual characters are rotated.

An ambigram can, but does not have to be, a palindrome at the same time . There are graphically adapted ambigrams or real font ambigrams. With a graphical change in the font, an ambigram can be formed from almost every word. But there are also ambigrams for which a graphical adjustment of the font is not necessary. Examples include words like opodo, pod, NOON, SONOS or SOS , XOX and WM . Often these fancy names make little or no sense, but are often used as brands or company names. In order to be able to use a real ambigram expression, you usually have to pay attention to uppercase and lowercase letters as well as suitable fonts. Suitable letters are: b, d, l, m, n, o, p, q, s, u, w, x, y, z, H, I, N, M, O, P, S, U, W, X, Y and Z.

The term "ambigram" was first used by Douglas Hofstadter , who ascribed it to one of his friends (book: Metamagical Themas, 1985).

Ambigrams have an increased advertising effect, as products can be read the same from different sides. That is why many logos are designed as ambigrams, such as the SONOS or SUN logo .

Ambigrams play a major role in the novel Angels & Demons by Dan Brown . The surname of the figure Emma Zunz in Jorge Luis Borges ' story of the same name is an ambigram.