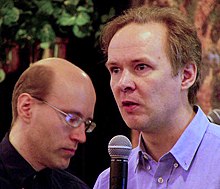 MySQL AB is a Swedish software company. It was acquired by Sun Microsystems in February 2008 . It provided products and services in the field of database systems. It was particularly known for the MySQL database management system . The system is now offered by Oracle Corporation both as free software (under the GPL ) and under a commercial license. The GPL version includes - as usual - no guarantee or support whatsoever, while the commercial version comes with a comprehensive guarantee.

The database engine MySQL was created in 1994 by the Finn Michael "Monty" Widenius as a further development of a self-developed ISAM engine for personal use for the Swedish management consultancy TcX AB, which he and his Swedish fellow students David Axmark and Alan Larsson after completing their studies at the technical university Helsinki founded, created.

At the urging of Axmark, who met Richard Stallman in the late 1980s and was very impressed by his ideas and concepts, MySQL was developed as a FOSS solution from the start . With more than 6 million installations and over 35,000 downloads per day, MySQL is the most popular open source database management system in the world.

The company MySQL AB ( "AB" Swedish for public limited company ) was founded by the three founders in order to better meet the requirements of the market with the help of venture capital. Widenius and Axmark then switched from TcX AB to MySQL AB.

From the beginning, the two of them wanted to earn money with this project. The concept of " dual license " is very aggressively represented by MySQL AB and is considered a model for other open source projects such as Berkeley DB . The developers at MySQL AB were run like normal employees. The MySQL product is therefore not the work of volunteers, but of employed programmers. The employees were scattered around the world, communicating via email, IRC, and telephone, and sometimes in person at corporate meetings or conferences. In this sense, MySQL AB was a virtual company, but it also had several locations worldwide (e.g. Uppsala in Sweden, Cupertino in the USA or Munich in Germany) where the employees - as is usual in other companies - are employed. Since March 2007, however, the MySQL Quality Contribution Program has existed, which actively promotes the incorporation of external corrections and features.

In May 2003, MySQL took over the database activities from SAP . The database SAP DB was renamed MaxDB and was offered as a second product by MySQL AB. MaxDB is SAP / R3 certified. The cooperation with SAP was ended again in October 2007, the database was renamed to SAP MaxDB from Release 7.7 .

In October 2003, MySQL AB announced the takeover of Alzato, an offshoot of the Swedish telecommunications group Ericsson founded in 2000 . With her, MySQL AB took over the development team and the rights to their product NDB Cluster, which MySQL AB subsequently integrated into the MySQL server as MySQL Cluster .

On October 7, 2005, Oracle announced the acquisition of Innobase Oy , the company that developed the InnoDB MySQL storage engine . In a press release on the takeover of Innobase, Oracle announced that the contracts between Innobase Oy and MySQL AB would expire in 2006 and would have to be renegotiated, which caused uncertainty among many users. The purchase was justified with an increased commitment in the open source area.

In April 2006, MySQL AB announced in a press release that Innobase Oy and MySQL had agreed to extend their existing contracts for several years. In the same announcement, MySQL AB also announced the development of its own transactional storage engine, codenamed "Falcon". This is developed under the leadership of Jim Starkey, whose company Netfrastructure was taken over by MySQL AB in February 2006. Starkey is in the database scene & a. known for the development of the InterBase database and his participation in the Firebird open source database project . However, Falcon is not based on the Firebird code base .

On January 16, 2008, MySQL AB announced that it had accepted a takeover bid from Sun Microsystems. The offer was $ 1 billion. The acquisition was completed in February 2008.