Richard Matthew Stallman (born March 16, 1953 in Manhattan , also known by the initials rms ) is an American activist and programmer who founded the free software movement in September 1983 .

In his writings and lectures, most of which are organized by the Free Software Foundation , Stallman formulates four freedoms with which he defines Free Software : The freedom to use software according to your own wishes, to view the program code and to be able to change it according to your own needs Passing on modified versions of the software to others. For Stallman, these freedoms are an ethical imperative. By founding the GNU project and developing the GNU C compiler , the GNU debugger , various tools from the GNU coreutils and the GNU Emacs editor , he was considered one of the most influential and productive programmers. Since 2008 he no longer actively contributes to the programming of software projects, but is mainly active as an activist for free software (through presentations, campaigns, etc.).

Stallman is of the opinion that any software should be "freely" usable by its users (which also includes developers) in his sense.

Stallman defines four freedoms that should be available to all users:

Software that ensures these freedoms (through its license) law, is he free software called (Free Software). Stallman positions itself explicitly against any proprietary software and its use. This includes all software that denies the user one or more of the freedoms, e.g. B. through restrictive end user license agreements , confidentiality agreements , product activations , dongles , copy locks , proprietary formats or the distribution of binary executable programs without source code .

Stallman sees a social and ethical basic principle behind these freedoms: Free software - and thus also its developers - would appreciate and respect the freedom and community of end users and create an environment that enables independence, community, cooperation, solidarity and exchange. These values ​​are also represented in the GNU project and the Free Software Foundation (which Stallman founded).

In September 1983 Stallman founded the GNU Project with the aim of developing a Unix-like operating system that would give users the four freedoms . He is the lead architect and organizer of the GNU Project and developed a number of its widely used components, including the GNU Compiler Collection , the GNU Debugger , various tools from the GNU coreutils and the GNU Emacs editor .

Stallman developed licenses for free software, which are supposed to legally ensure that the software is "free" in his sense. The best known of these licenses is the GNU General Public License (GPL). This license uses Stallman's concept of copyleft , which prohibits the software from being used as part of proprietary software. This is to prevent the user from being deprived of their freedoms.

With the start of the GNU project he initiated a movement for free software , in October 1985 he founded the Free Software Foundation.

Stallman almost always uses the word “free” to refer to freedom and not price. Examples are “Free Software” and “Free Works,” by which Stallman means works that users can copy and distribute, and also have the ability to examine and modify. When he speaks of monetary costs, Stallman mostly uses the words “free” or “zero price” instead.

Since the mid-1990s, Stallman has been primarily a political activist for Free Software. In campaigns, he fights developments that, in his view, endanger the freedoms of developers, software users and society. This includes software patents , digital rights management and extensions of copyright law.

Stallman was working the early 1970s in the AI Lab (Department of Artificial Intelligence ) of the Massachusetts Institute of Technology , together with a group of programmers who call themselves hackers designated. Your hacker community lived a very rigorous philosophy of unlimited flow of information. In the following years there was a decisive change in the software industry, from Stallman's point of view: Many companies began to no longer deliver software in the form of source text that was largely common up until then , but in the form of a purely machine-readable format, the so-called binary format . From now on, some companies also equipped their software with licenses that forbade users from redistributing the programs or changing the programs themselves.

Stallman found this loss of user control over the software they use as a restriction on their freedom . To counter the trend, he created a license in 1989, which became known as the GNU General Public License (GNU GPL). This license guarantees users extensive rights over their software and ensures that the same rights also apply in the future and for all extensions made to this software by third parties ( copyleft principle).

He quit MIT in 1984 and spent several years programming an operating system that would consist entirely of free software. To this end, he published his GNU Manifesto in 1985 , in which he laid down the main features of the system that was to be called GNU . The name GNU is a recursive acronym ( G NU is N ot U nix), which on the one hand should point to Unix compatibility, on the other hand to the differentiation from all non-free Unix variants. During this time he developed, among other things, the first version of GNU Emacs (a complex, programmable text editor ), the GNU Debugger (GDB), the first free cross-platform C compiler (now gcc ) and various auxiliary programs required for a Unix environment.

He remained connected to the Computer Science & Artificial Intelligence Lab (CSAIL) as a freelance scientist until 2019, resigning after controversial comments on Jeffrey Epstein . He also resigned as President of the Free Software Foundation . 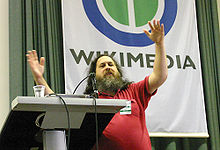 Richard Stallman giving his Copyright and Community speech at Wikimania 2005

Despite his numerous contributions to free software, Richard Stallman is considered by some to be controversial. He clearly represents his positions and political ideals and delimits the free software movement z. T. from the open source movement. When developing software, however, these two movements usually work very closely together.

Lately Richard Stallman has been very active against the spread of digital rights management systems and the establishment of software patents within the European Union and therefore often travels across Europe, but also to Asia and South America, to give lectures on these topics .

He also criticizes the fact that when JavaScript is used in web pages, it is not easy for the user to see whether it is free or non-free software. Due to the "quietness of the browser", users are not even aware that many non-free programs are executed in the web browser.

In an interview in January 2010 he said that he explicitly used a Lemote Yeeloong netbook with gNewSense as the operating system. The reason for this is that both consist exclusively of free software.

Until the end of February 2011 he worked for the South American news and culture channel teleSUR .

In October 2011, on the death of Steve Jobs , he quoted the statement of Chicago Mayor Harold Washington about his corrupt predecessor Richard J. Daley : "I'm not happy that he's dead, but I'm glad he's gone." a comment that was received controversially by the public.

In September 2019, Stallman resigned as President of the Free Software Foundation, which he had chaired since its inception in 1985.

Stallman is one of the founders of the free software movement. He wrote basic texts on the idea of ​​free software and was the author of the copyleft licenses associated with it.

Stallman attaches great importance to a specific choice of words when naming concepts and projects, because the terms he has chosen are inextricably linked to the original ideals. For example, he attaches great importance to speaking of free software instead of open source , since the original concern is not simply about the openness of the source, but rather the freedom that the software gives the user. This is covered with a one-sided focus on the exposure of the source code (see chapter Conceptual problem in the article Open Source ). He also insists on the designation GNU / Linux instead of Linux for operating systems with the Linux kernel , as these were largely based on the work of the GNU project (see GNU / Linux name dispute ).

Richard Stallman has received a number of honors and awards. These include:

Stallman is an atheist and is single and childless.