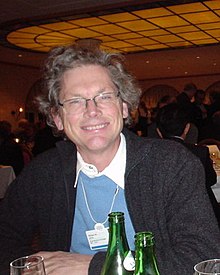 Another of his important projects was the further development of TCP / IP , because of which he is sometimes referred to as "Edison of the Internet ". After Bill Joy founded Sun Microsystems in 1982 together with Vinod Khosla , Scott McNealy and Andy Bechtolsheim , he was in charge of the development of technologies such as SPARC , Solaris (SunOS), Java and Jini . On September 9, 2003, he left Sun. In April 2000, Joy caused a sensation with his controversial article Why the future doesn't need us in Wired Magazine . Among other things, it says: "The most important technologies of the 21st century - robots , genetic engineering and nanotechnology - threaten to make humans a species threatened with extinction." In 1999 he was elected to the American Academy of Arts and Sciences .

He is still considered an icon of Silicon Valley and repeatedly deals with the influence of technology on humanity as well as the possibilities and limits of the new economy .