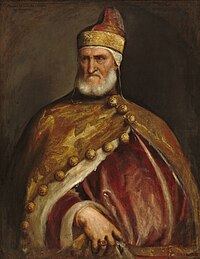 Gritti spent the first politically active years of his life mainly in Constantinople , where he represented Venice's interests. In 1499 he was arrested on charges of espionage, but escaped execution because of his friendship with the vizier . Years later he was rehabilitated.

1509, after the Venetian defeat in the battle of Agnadello against Louis XII. Gritti was appointed leader of the Venetian Army in Treviso by the Council of Ten to support rebellions against the invaders. He managed to bring Padua back to the Venetian side and to defend the Cadore against the troops of Emperor Maximilian . In the following year 1510 , after the death of the previous captain general Nicolo di Pitigliano, Gritti took command of the entire Venetian army, but had to retreat to Venice due to the French advance. Until the end of the League of Cambrai , he was able to hold the front lines and defend Venice's position despite the first defeat of the Holy League . In 1512 Gritti left the Holy League after negotiations with Francis I and concluded an alliance with France.

Andrea was the father of Lodovico Gritti , a temporary ruler of Hungary.

His grave in Venice.

After being elected Doge in 1523, Gritti signed a contract with Charles V , which ended Venice's participation in the Italian wars . He tried the neutrality of the Republic, despite the continued fighting between Francis I and Charles V maintain. In doing so, he urged both of them to turn their attention to the advance of the Ottoman Empire into Hungary . But he could not prevent Suleyman I from attacking Corfu in 1537 and thus forcing another war on Venice.

Domestically, Andrea Gritti turned the less wealthy aristocracy against her, the existence of which depended heavily on the offices reserved for them. The activity as a judge was particularly important, an office to which only nobles could be elected. Gritti wanted to introduce Roman law , which would have required the training of these lay judges. This training, in Padua or Bologna, was not affordable for the poor nobles. They succeeded in ensuring that lay judges remained in Venice, with a correspondingly high degree of freedom of judgment, as well as the orientation towards precedents.

Andrea Gritti was first buried in San Zanipolo . In 1580 his body was transferred to the church of San Francesco della Vigna designed by Jacopo Sansovino, and Gritti had commissioned the laying of the foundation stone in 1534. There a simple inscription plaque reminds of the doge.