Emperor Xuande on the hunt

After the sudden death of his father Hongxi, Xuande becomes the fifth emperor of China from the Ming Dynasty . The first thing he does is break with his father's plan to move the capital back to Nanjing and instead bring the rest of the administration to Beijing . Immediately after taking office, however, the 26-year-old emperor is faced with a much more serious problem, the rebellion of his uncle Zhu Gaoshu, the prince of Han. On September 2nd, he declares war on the imperial court, raises an army and begins to deploy his own imperial officials.

After Grand Secretary Yang Jung assured him that both the administration and the army were united behind him, Emperor Xuande himself took command of the army on September 9 and went into battle alongside the experienced General Xu Lu against his uncle. September 22nd20,000 soldiers storm the city of Le'an and take the rebel prince prisoner. The uprising was quickly put down and Zhu Gaoshu and his entourage were taken to Beijing and executed. More than 600 unfaithful military and civilian officials share this fate, and another 2,200 officials are banished to the borders. Research reveals that two other uncles of the emperor are involved in the plot. Xuande spared them, however, but in return disempowered all Ming princes and condemned them to be completely dependent on the imperial Ming court.

Coat of arms of the old University of Leuven

With the foundation bull Sapientiae immarcescibilis, Pope Martin V founds the University of Leuven on December 9th as the studium generale and first university in the Brabant-Dutch area and gives it the same rights, privileges and immunities as the universities of Cologne, Vienna and Leipzig own . The bull gives approval for the establishment of four faculties : an artist faculty, a civil law faculty, a canon law faculty, and a medical faculty.

The St. Ives Bridge over the Great Ouse is completed. 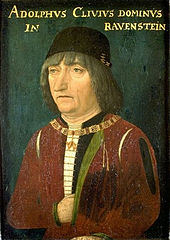 Portrait of Adolf von Kleve, around 1485