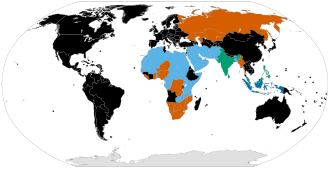 Polygyny ( polygamy , from the Greek "poly": a lot and "Gyné" woman) called the people a form of marriage , in which it is permitted a man to marry more than one wife. In biology , polygyny describes a mating behavior , in which a male mates with several females within a reproductive period . In both cases it is a special case of polygamy .

In humans, polygyny is more common than polyandry . If a man is in a relationship with exactly two women, this is also called bigyny . Some polygynous marriages also have hierarchies that are either emotional or time-based. Polygyny can be the expression of a stratification between age and gender when, in polygynous societies, older men marry very young women and younger men either remain single for a long time or marry older widows. Polygyny correlates with political and economic systems in which human resources - and not land or goods - are the most important means.

Polygyny is in large parts of Africa , the Muslim dominated Middle and Middle East , in the People's Republic of China , in Indonesia , Melanesia , Polynesia before and at various Indian tribes in North and South America and historically among the Mormons in Utah (today some Mormon splinter churches ). It was part of ancient religions such as Judaism and, to this day, Islam. With the Normans and Vikings , the possibility of marrying a second wife was tolerated by the church for a while as More danico (according to Danish custom) after her Christianization . Martin Luther married the Landgrave of Hesse, Philip the Magnanimous , also to two women based on the Bible, but restricted the right to the ruling class. In the Anabaptist Empire of Münster , general polygyny was introduced in 1534 because of a considerable surplus of women.

One speaks of general polygyny when every man in the society concerned has the opportunity to marry several women and when it is also common practice for men to strive for plural marriage. General polygyny tends to occur more in societies in which the hierarchical differences between men are less pronounced.

In some societies with limited polygyny, only leaders or chiefs have the right to marry multiple women (e.g., among the Nambikwara and Tupi-Kawahib in Brazil (see Sad Tropics )). With the Trobrianders, for example, polygyny is a status symbol that expresses the power of a chief: through polygyny he can have more children and family relationships, which he in turn can manipulate strategically. This gives him a broader economic base and, to a certain extent, he can control not only his wives but also their brothers.

Polygyny with or without co-residence

If the women live and live together, one speaks of polygyny with co-residence. Polygyny with a separate residence occurs much less often.

If the wives are sisters, one speaks of sororal polygyny. In a cultural comparison, non-sororal polygynous marriages are more common than sororal marriages.
This form of marriage should not be confused with the sororate .

Like polygamy, the term polygyny was originally coined for humans and only later transferred to non-human beings. In the 18th century, a purely moral distinction was still made: polygamy was related to marriage systems with several women, polygyny was limited to sexual relationships. From the middle of the 18th century, the terms developed into purely descriptive technical terms. In botany, Carl von Linné differentiated in his system of flowering plants the classes of Polyandria, with many male stamens, and Polygamia, changed to Polygynia in 1737, with many (female) pistils . In general, in biology the mating of a male with several females was initially called "polygamy" and distinguished from "polyandry" (this was not a subclass of it), as was the case with Charles Darwin . Polygyny as a biological term for mating systems was first introduced in 1876 by Herbert Spencer .

In zoology , polygyny describes a mating system in which a single male mates with a large number of females, with this male being their only mating partner. It is distinguished from monogamy (one male, one female), polyandry (one female, several males, with the female being the only mating partner) and polygynandry (also promiscuity, several females, several males). While monogamous couple relationships predominate in birds with a proportion of over 90 percent, it is exactly the opposite in mammals, here with over 90 percent proportion of polygamous mating systems, and monogamous relationships as an exception. Polygyne mating systems are often socially determined: males fight among themselves for control over groups of females, not only trying to drive away foreign males, but also to determine the mating behavior of "their" females, even against their will. Such a group of females is also referred to as their harem in a human way .

Polygyne mating relationships are subject to sexual selection and in turn have an effect on it. Polygyny means that the mating success of the male sex is more variable than that of the female: few males have many offspring, many have few or none at all. If mating battles between the males (to control a harem or a courtship area ) are decisive for the number of offspring, this tends to lead to a size dimorphism of the sexes, with larger males, although repercussions due to natural selection are to be expected (if males and Females can use different resources depending on their size). In addition, repercussions on the gender distribution are to be expected. The situation can be complicated when mothers can influence the sex of their offspring, since depending on the size of the female it can pay off to produce more male or more female offspring. Traditionally, it was assumed that social and genetic polygyny were largely congruent. Since it has become possible to determine the parents directly through genetic tests, it has become clear that a large proportion of the offspring does not come from the harem owner. Females can therefore to a certain extent evade its dominance. This enables weaker males to use alternative reproductive strategies, counteracting the trend of sexual selection towards size dimorphism.

Various ecological factors have been made plausible as decisive for the evolution of polygynous social mating systems : facultative polygyny can arise when males occupy and defend territories that are the habitat of several females, who no longer have contact with other males. If females live together in social groups, for example in order to better raise their young, individual males can monopolize access to the group over other males for themselves. It is possible that only groups (coalitions) of several males will succeed, especially if the groups of females become very large. Changes in the amount and distribution of food resources have an impact on the mating system.