Dimorphisms in the bee . From left to right: worker, queen, drone

The best known form of dimorphism is sexual or gender dimorphism, in which male and female individuals differ significantly from each other. The difference, as is often the case with spiders and some fish, may be in size. The sexes can also have different colors, as is the case with many bird species, in which the female is often inconspicuously colored for camouflage, while the male has bright colors. In walruses , sexual dimorphism is given by the male's tusks , which the females lack. In plants, dioecious as well as some forms of Subdiözie and Gynodioecy and Pleogamie (occurrence monosexual flowers beside the hermaphrodite flowers in varying distribution on the individuals of the same species).

Other forms of biological dimorphism 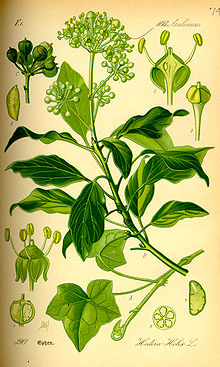 On ivy ( Hedera helix ) the shoot dimorphism can be observed - there are tendrils and flower shoots, as well as the leaf dimorphism on the same plant.

In the meantime, the term has been transferred in the general sense of two forms or the juxtaposition of different forms to other areas of science, where it denotes two different manifestations of a basic form, for example in archeology with settlement dimorphism , which indicates different forms of a basic type of settlement (for example in the village). Even prehistoric tool categories are sometimes differentiated in this way.

With this rather unspecific use, however, the boundary to polymorphism is sometimes blurred, as one would like to describe above all a drifting apart of initially two, but later also more, variants that are not always precisely delimited, for example in paleoanthropology the environmentally-related dimorphism in Australopithecus into graceful and robust Forms ( A. robustus vs. A. africanus ).

In mineralogy , dimorphism denotes minerals when they occur in two different crystal systems.