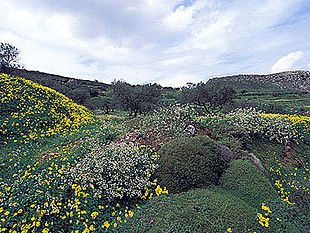 Flowering bushes of the Phrygana in spring in eastern Crete

Phrygana ( Greek φρύγανα [ friɣana ]) is the name for the marked by low, evergreen bushes and shrubbery plant formation that large parts of the landscape of the northeastern Mediterranean covered ( Greece , Crete , Turkey and Cyprus ). The term already used by Theophrast (371–287 BC) was introduced into vegetation by Theodor von Heldreich in 1877 .

The typical representatives of the Phrygana are woody plants with a height of up to one meter (usually significantly lower), which would never develop tree-like even without growth hindrance. In contrast, the typical representatives of the maquis are tree species that have been reduced to shrub form , so the maquis can be understood as a reduced forest . 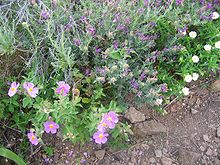 In the Phrygana, thorn-reinforced spherical bushes dominate, which are well adapted to wind and drought and are immune to being eaten by goats or sheep.

Typical bushes of the Phrygana are:

The Phrygana societies are placed in the plant sociological system in the class Cisto cretici-Micromerietea julianae Oberdorfer .

Phrygana develops with the combination of pasture use and slash and burn from the maquis on increasingly degraded soil . The vegetation quickly recovers to its original state after a fire; the frequent, often deliberately set fires, however, exert a high pressure of selection on the plant and animal community. In spring a number of geophytes and a large number of therophytes appear , which make up the main part of the often high alpha diversity (with up to 100 plant species per 100 m²) of this type of vegetation.

A further reduction of the Phrygana leads to the growth form of the rock rift , also known as steppe in English-speaking countries . Macchie , Phrygana and rock rift usually do not appear in isolation as the predominant growth form, but alternate like a mosaic or merge into one another, due to the formation and composition of the soil. However, there are also landscapes whose vegetation consists only of representatives of the Phrygana.

The term garigue has established itself for the plant communities growing in the western Mediterranean region (Spain, France, Italy and Maghreb) with the same ecological role . Other regional names are tomillares (Spain), trachiotis (Cyprus) and batha (Israel).

Other authors differentiate between Garigue and Phrygana for the eastern Mediterranean as well ; usually a typical height of one meter is given for the garigue, whereas areas with loose vegetation up to half a meter high are referred to as phrygana. " Gariden " is used as an umbrella term for the entire Mediterranean region.