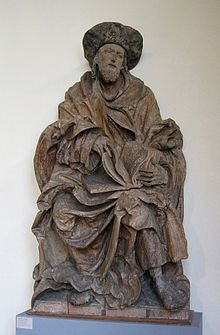 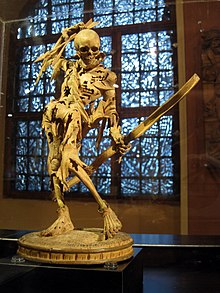 An exhibit in Ambras Castle (Austria): skeleton, depicted in strong, dancing counter-post, attributed to Hans Leinberger, in the inventory of 1596, see Memento Mori

Hans Leinberger , also Lemberger (* around 1470/1480; † 1531 or a little later) was a sculptor at the transition from late Gothic and Renaissance in old Bavaria and one of the most important sculptors and carvers of his time. Leinberger worked in wood, metal and stone.

Origin and way of life

His place of birth is not documented, but his artistic origin is recognizable based on stylistic evidence from the Nuremberg art of the 1480s and -90s. The sculptor Simon Lainberger, who was most mentioned and famous there in those years, could not only have been his father or at least a close relative because of the fact that he had the same name. If one accepts the early year of birth around 1470, it could also be identical to a Johannes Laimberger, who came from Augsburg and enrolled at the University of Ingolstadt in 1487 . Relations with Augsburg masters could confirm a stay in Augsburg. Even after his settlement in Landshut around 1510 (first mention), only a few documents are available about Leinberger's artistic work, most of them about his main work, the high altar retable of the Moosburg collegiate church St. Kastulus , donated posthumously by Duke Albrecht the Wise and the Provost Theoderich Maier. Other mentions refer to works for Kaiser Maximilian , for Regensburg , Dingolfing and Polling . Even the exact workshop location is unknown in the last few years of creation.

Since 1516 he has been working for Duke Ludwig X. , who since then resided in Landshut as co-regent of Duke Wilhelm IV in Lower Bavaria. Pay payments in 1529/30 indicate a position comparable to that of a court artist.

It is very likely that Hans Leinberger or "Lemberger" is an older brother or already the father of the painter and graphic artist Georg Lemberger from Landshut.

As Theodor Demmler recognized in 1914, there are no artistic relationships with the picture carver HL ( Master HL ) who was active in the Upper Rhine ( Breisach ) and was also a graphic artist .

Today, Leinberger's fame is mainly linked to the high altar of the Kastulus Minster in Moosburg an der Isar , which was completed in 1514 , the largest preserved altar retable in Old Bavaria , which of course was extensively redesigned by the Landshut sculptor Christian Jorhan the Elder in the late 18th century . Ä. has experienced. Leinberger is here the image concept of Luke Madonna - a painted half-length image of the Virgin and Child, which the Evangelist Luke is said to have created - into three dimensions and full-length to and forms at the same time in resorting to the art of beautiful style a visual language of unparalleled powerful effect.

According to the Anna selbdritt relief dated 1513 in the church of St. Johann im Gnadenthal of the Gnadenthal monastery in Ingolstadt , the sculptor must have handled a large volume of commissions at that time. The entrustment of the bronze statue of Count Albrecht IV of Habsburg on the tomb of Emperor Maximilian in the Innsbruck Court Church in 1514 - the drawing provided by Albrecht Dürer - shows the high reputation of the artist. With the former Rosary Madonna of St. Martin in Landshut (around 1516/18?) And the seated figure of St. Jodok for the second parish church in the city (around 1525?; Today: Munich, Bavarian National Museum , inv. No. 15/114) Leinberger reached the peak of his work at the turn of the third decade. The altar figures of the former high altar of the Church of Our Lady in Polling - only the enthroned Mother of God ( Polling Abbey ) and the Man of Sorrows (Weilheim, City Museum, inv. No.B 165) have been preserved - are the last archival documented works of the sculptor. Also in the baroque St. John's Church in Deutenhausen near Weilheim , a parish church incorporated into Polling Monastery from 1209–1803, there is a standing Virgin and Child on the high altar, which is probably a scaled-down counterpart to the Landshut Rosary Madonna, since the middle of the 18th century. Century is crowned with baroque silver crowns.

Leinberger's work exerted an influence on contemporaries that is still only rudimentary. In the east of Bavaria, the so-called master of the Altötting doors developed a lively workshop activity in his successor. For decades, the sculptor Peter Dell d. Ä. , an apprentice of Tilman Riemenschneider , from the impressions gained in Landshut.