Deutenhausen is a former municipality and is now part of the district town of Weilheim in Upper Bavaria in the Weilheim-Schongau district . The church village is just under three kilometers southeast of the old town of Weilheim.

Deutenhausen is on the edge of the Eberfinger drumlin field . The Angerbach runs through the village .

The oldest known mention of Deutenhausen comes from the year 1083, when the Chur Bishop Norbert von Hohenwart assigned properties in "Tutenhusen" to the Habach Monastery in a document . Since then, the existence of a noble family "von Tutenhusen" has been secured, which died out at the beginning of the 13th century.

With the first community edict , the political community was created in 1808, which in addition to the village itself consisted of the following districts: Farchenbichl , Gabler , Gossenhofen , Hardtwiese (from around 1950), Hirschberg am Haarsee (up to the 1904 locality directory “Haarsee”), Marnbach , Smoking , Rothsee . The community belonged to the district court of Weilheim . In 1880 the Marnbach-Deutenhausen volunteer fire brigade was founded. In 1919 it was connected to the power supply.

The Second World War ended for Deutenhausen on the evening of April 29, 1945 with the invasion of American troops .

In the course of the regional reform on January 1, 1978, the entire community was incorporated into Weilheim .

1 Values ​​of the former districts totaled 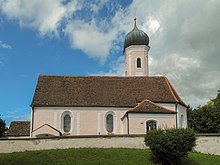 Since 1199 Deutenhausen with its church St. Johann belonged to the parish of Polling and was looked after by the local monastery , from 1479 by a Polling vicar . As a result of secularization in Bavaria , Deutenhausen came to the parish of Eberfing in 1802 . In 1917 the Marnbach branch was raised to an independent parish in the Augsburg diocese , and Deutenhausen became its branch . This came to the Weilheim parish community in the 2010s .

The "Marnbach - Deutenhausen sports and shooting club" has existed since 1975. 1879 was veteran club initiated in 1890 followed the Zimmerstutzen protect simplistic . The youngest association is the one "for garden culture for Marnbach-Deutenhausen", founded in 2000.

From the time the school was founded in Marnbach in 1796 until it was closed in 1982, Deutenhausen was part of the local school district .

Sons and daughters of Deutenhausen

People who worked in Deutenhausen