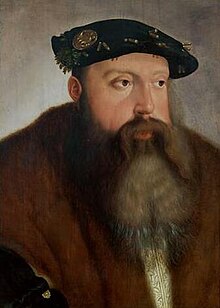 Ludwig X. of Bavaria (born September 18, 1495 in Grünwald ; † April 22, 1545 in Landshut ) was excluded from the succession in the Duchy of Bavaria as a younger son in 1508 because of the Primogeniture Act from 1506 , but obtained on February 17, 1514 from co-government to his older brother, Duke Wilhelm IV . After a dispute, the brothers agreed on a renewed division of the duchy, whereby Ludwig X. also ruled independently as Duke of Bavaria from October 14, 1514 until his death from Landshut - but only in the districts of Landshut and Straubing . He applied for the Wenceslas Crown in 1526 and for the election of Roman-German King in 1530 , but was defeated by Ferdinand I Archduke of Austria (* 1503, † 1564)

Ludwig's father Albrecht IV had established indivisibility and primogeneity for the Bavarian lands in 1506 . Therefore, after his death on March 18, 1508, Ludwig's older brother Wilhelm IV took over sole government. Ludwig was limited to an appanage and the title of Count von Vohburg . In 1509, Johannes Aventinus was entrusted with the upbringing of the two younger brothers Ludwig and Ernst .

When he came of age, Ludwig nevertheless raised claims to co-government on the grounds that he had been born before the succession and asked Emperor Maximilian I for help. The landscape feared a new edition of the Landshut War of Succession . At her urging, Wilhelm accepted the co-government on February 17, 1514. However, he soon moved away from it and prepared to argue against his brother. Emperor Maximilian then issued an arbitration award in Innsbruck on September 29, 1514 , according to which Ludwig should receive the title of duke and a quarter of the territory of Bavaria. The brothers were soon suspicious of the emperor, who had already paid dearly for his mediation in the Landshut War of Succession through ceded Bavarian territory in 1505 and reached an agreement on their return on October 14, 1514 in Rattenberg (one of the formerly Bavarian places lost to Maximilian) otherwise Wilhelm should of Munich from the districts of Rent offices in Munich and Burghausen reign, Ludwig von Landshut from the districts of Landshut and Straubing . This division of power actually worked; there were only minor differences of opinion.

Under Ludwig X, Martin Luther's writings were initially allowed to be printed and distributed in Bavaria. The papal bulls of 1520 were hardly noticed. It was only after the Reichstag in Worms and the Worms Edict that Emperor Karl V succeeded in winning Wilhelm and Ludwig on his side. With the Grünwald Conference , which took place at Grünwald Castle in February 1522 , an event in Grünwald's history gained European significance. At this conference the brothers Wilhelm and Ludwig, who was also born in the castle, agreed that Bavaria should continue to belong to the "old faith" in future, but that the church should be reformed. This decision is understood today as the beginning of the Counter-Reformation in the empire and the Habsburg lands and had an impact that would shape the history of Europe over the next few centuries.

In the Peasants' War Ludwig did not act very happy. After the armistice with the Swabian peasants on May 30, 1525, he sent his troops east to rush to the aid of the besieged Archbishop of Salzburg .

After the childless King Ludwig II of Bohemia and Hungary fell in 1526, envoys from the Bohemian nobility asked Duke Ludwig to apply for the Bohemian crown. This had his grandfather Albrecht III. still refused. Ludwig, on the other hand, was quite interested, but was subject to the Habsburg and later Emperor Ferdinand in the election by the estates . Wilhelm and Ludwig then supported Ferdinand's opponent Johann Zápolya in the hope of reducing the influence of the Habsburgs. Ludwig tried to become Roman-German king , but lost again to Ferdinand in the 1531 election. Only three years later, Ludwig recognized the choice. In 1531, Duke Ludwig became the first field captain of the Bavarian Empire .

In 1536, a campaign by Charles V to Italy against France, in which the Bavarian duke participated, failed, but Ludwig got to know the Gonzaga's new palace in Mantua, where his aunt Margarete's Italian family resided. From 1537 to 1543, Ludwig X. had the new city ​​residence in Landshut built, the earliest work of Renaissance architecture north of the Alps based on Italian models . In his residence in Landshut, Ludwig a. a. Hans Leinberger , probably the most important Bavarian sculptor of his time.

Ludwig died in 1545 without a legal successor, so that after his death his brother Wilhelm was able to take over sole rule over Bavaria again. This was the final end of the Bavarian divisions, subsequent princes only took over counties in the future, but above all they occupied ecclesiastical princedoms, which should indirectly lead to the extinction of the Bavarian line of the Wittelsbachers in 1777.

After Ludwig's death, however, there were still disputes about his other legacy, which his sister Sabina and the deceased's partner, Ursula von Weichs , had taken over without any legal basis. Chroniclers describe an ugly appearance by Sabina to the family and a commission sent to preserve the heritage. In the course of the dispute, she declared her inheritance waiver associated with the wedding in 1511 null and void, whereupon she was imprisoned by her Bavarian family for 16 weeks in the Neue Veste in Munich and thus forced to issue another inheritance waiver, which she sealed on September 16, 1545.

From an extramarital relationship, probably with Anna Elisabeth Eisengrein (* 1505, † 1556), who was a daughter of the Stuttgart mayor Martin Eisengrein and his wife Agathe nee. Schell was and in 1530 became the wife of Reich Vice Chancellor Jakob von Jonas (* 1500, † 1558), Duke Ludwig X. left a daughter: