Individually or in combination, the four fundamental interactions bring about all known physical processes, be it processes between elementary particles or between matter and fields on a macroscopic scale, be it on earth, in stars or in space. Further types of interactions do not seem necessary to describe nature; occasional hypotheses about a “ fifth force ” that would be necessary to explain certain observations could not be confirmed. On the other hand, it has not yet been possible to explain the diversity of the observed processes with fewer than four fundamental interactions.

However, it should be noted that this simple picture, which was worked out around the middle of the 20th century, needs to be modified according to more recent developments: Two of the four interactions (the electromagnetic and the weak interaction) are based on a common basis in today's standard model of elementary particle physics derived, which bears the name electroweak interaction . For this reason, only three fundamental interactions are sometimes spoken of. On the other hand, the standard model contains the new type of Higgs field , which, through a special type of interaction, fermions initially assumed to be massless , e.g. B. gives the electrons their mass. However, so far (as of 2017) this interaction is usually not referred to as the fifth fundamental interaction.

Gravitation, also known as gravity , was identified as a force of nature by Isaac Newton in the 17th century and described mathematically. It emanates from every body with mass and has an attractive effect on all other masses. It decreases with distance, cannot be shielded and has an infinite range. The gravitation emanating from the earth makes up the main part of the weight force , which has a decisive influence on our living environment. Gravitation is the predominant interaction between the planets and the sun and thus the cause of the shape of the solar system . It has a decisive influence on the state and development of the stars , but also dominates the large-scale structures of the universe . The gravitational force also acts between two objects of the size that we deal with every day, but is then so weak that it is practically negligible in everyday life and could only be proven experimentally by Henry Cavendish at the end of the 18th century ( gravitational balance ). As a further development of Newton's law of gravitation , the theory of gravity that is valid today is the general theory of relativity , which was established by Albert Einstein at the beginning of the 20th century . A corresponding quantum field theory has not yet been found.

The electromagnetic interaction was identified as a fundamental force of nature from the middle of the 19th century after James Clerk Maxwell set up the Maxwell equations named after him , with which the phenomena of electricity , magnetism and optics can be described equally. The electromagnetic interaction is based on electrical charges, magnetic dipoles and electromagnetic fields. The forces that it exerts on magnetic or charged bodies can be directly perceived by humans. Like gravity, electromagnetic interaction has an infinite range. However, depending on the sign of the electrical charge, it has an attractive or repulsive effect and can therefore be screened off or even eliminated in contrast to gravity (positive and negative charges usually compensate each other almost exactly). Everyday phenomena such as light , electricity, magnetism, chemical bonds , including chemical reactions and different material properties in nature and technology can be attributed to the electromagnetic interaction . The quantum field theoretical advancement of the classical Maxwell equations led to quantum electrodynamics in the middle of the 20th century . Here the photon is the exchange particle on which all electromagnetic effects are based .

Also known as the weak nuclear force , the weak interaction was discovered and described by Enrico Fermi in 1934 as the new fundamental interaction that causes beta radioactivity . It has an extremely short range of around 10 −16  m. It works between all particles of the lepton and quark type , whereby it is the only one of the interactions that can cause conversions from one type of particle to another (e.g. electron becomes neutrino, up quark becomes down quark, but not between leptons and quarks) . The weak interaction is also the only one that violates the symmetry of natural processes in relation to a reflection of space, a reversal of the charges or the direction of time (see parity violation , charge conjugation , time reversal invariance ). The weak interaction cannot be perceived directly by humans. B. indispensable intermediate steps in the nuclear fusion of hydrogen to helium , from which the sun gets its radiation energy. (The energy itself is released through the strong interaction.)

The quantum field theoretical description of the weak interaction is based on the combination with the electromagnetic to the electroweak interaction , which is a cornerstone of the standard model of elementary particle physics. Their exchange particles are the Z 0 , W + and W - , which due to their large mass cause both the short range and the relative weakness in everyday processes. In connection with the explanation of the mass of these exchange particles, the theory predicts another particle, the Higgs boson . In July 2012, the research center CERN announced the detection of a particle at the Large Hadron Collider , which is very likely to be the Higgs boson.

The strong interaction, also called strong nuclear force, binds the quarks together. It brings about the internal cohesion of the hadrons , e.g. B. the proton and neutron . It is also the cause of the short-range mutual attractive forces that act between the hadrons. These are called nuclear forces in the narrower sense, as they enable the protons and neutrons to hold together to form the atomic nucleus . The strong interaction thus determines the binding energy of the atomic nuclei and the energy turnover in nuclear reactions . These energy conversions are typically millions of times greater than in chemistry, where they arise from the electromagnetic interaction between the atomic shells .

The strong interaction has been postulated as the strongest basic force in nature since the 1920s, but could only be correctly described in the 1970s after the discovery that all hadrons are composed of two or three quarks. The quantum field theory of strong interaction is quantum chromodynamics (QCD). It represents the interaction between two quarks through the exchange of a gluon . The particles carry their own type of charge, which, in contrast to the electrical charge, occurs in eight variants. A characterization takes place via three simultaneously measurable quantities, which are called color charges of the objects. It is characteristic of the strong interaction that the elementary particles on which it acts cannot occur in isolation. If you try to separate two quarks from each other, so much energy has to be expended that, due to the equivalence of mass and energy, further quarks are created and combine with the existing ones again to form complete hadrons. This phenomenon, known as confinement , means that the range of the strong interaction effectively does not exceed the radius of a hadron (approx. 10 −15  m). The exact mechanisms of the strong interaction are the subject of current research.

Note: The typical relative strength is given as it is observed in processes in the energy range up to a few GeV. Since the values ​​depend strongly on the energy, the weak interaction is also given in some sources with the relative strength 10 −13 , the gravitation with 10 −38 or 10 −39 . The essential finding is the miniscule strength of gravity and the small value of the weak interaction at low energies.

Although it has not yet been possible to provide evidence, there is much speculation in theoretical physics about other possible forces. This includes, for example, Technicolor theories, theories of supersymmetry or string theories . New macroscopic forces are occasionally summarized under the term “ fifth force ”. All of these forces represent hypothetical extensions of the standard model of elementary particle physics. 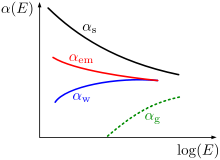 One of the goals of physics is to find out whether all basic forces or interactions can be described in a unified overall concept. This could make it possible to trace all known forces back to a single basic force. One speaks here of unified theories . For example, electromagnetic interaction is a unification of electrical and magnetic interaction. Furthermore, the electromagnetic interaction and the weak interaction at energies from about 10 2  GeV have about the same strength and can be described as an electroweak interaction . However, in the current standard model of elementary particle physics, the strong interaction is unconnected. A theory that would unify these three basic forces of the current standard model of particle physics, grand unified theory ( Grand Unification Theory GUT called). A central component is the approximation of the coupling constants of the three interactions to a common value when the processes are examined at ever higher energy. Current theories assume such an approximation at around 10 16  GeV, which is an unattainable factor 10 12 above the currently highest particle energy achieved in an experiment.

A theory that unites all four basic forces is called a world formula or Theory of Everything ( TOE ). In addition to the still hypothetical GUT, it must therefore contain a previously unknown quantum theory of gravity . String theories or superstring theories are promising candidates here, even if they have not yet produced any results that can be verified by experiments.

The following table describes schematically the relationship between different basic forces and the corresponding hierarchy of theories of physics:

There are probably few books that treat all four basic forces equally. A brief introduction can be found e.g. B. in

Introductory books on gravitation are e.g. B.

and to search for a theory of quantum gravity