This article deals with the class of elementary particles. For further meanings, see Lepton (disambiguation) . 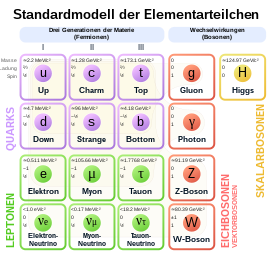 The name was derived from the Greek λεπτός leptós 'thin', 'small', 'fine'. It is selected to differentiate it from two other particle classes, the mesons (“medium- weight”) and the baryons (“heavy-weight”). Mesons and baryons are hadrons . As it turned out, these hadrons are composed of two quarks (mesons) or three quarks (baryons) each, so they are not elementary. Among the leptons there are also particles that are by no means “light”. For example, the τ-lepton (or tauon ) is about twice as heavy as a proton . At the time the name was given, the rope was still unknown.

There are a total of six types of leptons, which are divided into three so-called generations based on their physical properties . The following table summarizes the properties of the leptons.

Leptons are subject to the weak interaction , gravity , and if they carry electrical charge, also to the electromagnetic interaction . All leptons are fermions and have a spin ½.

If the flavor eigenstates do not correspond to the mass eigenstates of the neutrinos, the flavor is no longer a conserved quantity. For a neutrino that was generated in its own state , after a certain time there is a probability that it will also be detected in the state or ( neutrino oscillations ). This model can the deficit of the measured on Earth flow of solar neutrinos explain ( Solar neutrino deficit ). According to these results, neutrinos must have a mass greater than zero; Experiments such as KATRIN try to prove this .