Euterpe oleracea in English among other species also, Acai called, is a South American plant species from the family of the palm family (Arecaceae). In Brazil in particular, the fruits and palm hearts are used as food. Here the palm is called açaizeiro , the fruit açaí ([ aˌsaˈi ] pronunciation ? / I ). In German-speaking countries, the fruit is marketed under the name Acai berry .

Euterpe oleracea is a multi-stemmed palm with up to 45 trunks that can reach heights of over 25 m with a diameter of 7 to 18 cm. They are mostly gray from lichen growth, at the base there is a cone of red adventitious roots . The species also forms pneumatophores (aerial roots). 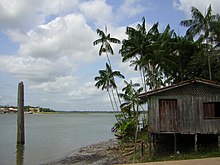 The shiny stone fruits are spherical with 1 to 2 cm in diameter. The remnant of the scar is on the side. The exocarp is purple-black, black or green and almost smooth to very finely textured. The brown seeds are spherical, the endosperm is deeply furrowed. The primary sheet is in two parts.

Euterpe oleracea is an economically important species in its entire range, as both the fruits and the palm hearts are edible. In Belém the fruits make an important contribution to the nutrition of the population and in the areas of the lower reaches of the Amazon populated by Caboclos the palm is even described as a staple food. The fleshy mesocarp of the fruit is mixed with water and made into a drink, as well as sorbet . The taste of the berries is u. a. described as greasy, earthy, nutty, and astringent .

In Europe, the fruit is usually available as a freeze-dried powder. The fruit can also be found in energy drinks. 100 g of this powder contains 534 kilocalories, 52.2 g carbohydrates, 8.1 g protein and 32.5 g fat. The carbohydrate content contains 44.2 g of fiber and a low proportion of mono- and disaccharides . Other ingredients include vitamins C and A , calcium and iron , as well as aspartate and glutamate . The fat content can be divided into 56.2% oleic acid , 24% palmitic acid and 12.5% linolenic acid . Açaí also contains β-sitosterol .

Since 2005 the fruit has been marketed as a so-called superfood in the US and Europe, in German-speaking countries under the name "Acai berry" . The content of antioxidants , vitamins and minerals is very high, but not higher than in many other well-known fruits such as blueberries . The promised effects, from weight loss to sexual stimulation, have not been scientifically proven. Since the sensitive berries cannot survive the transport to Europe, the açaí products, which are sold as superfoods in Germany, are only available as powder, juice or puree.

The consumption of non-heat-treated açai berries or their pulp is a common cause of infections with Trypanosoma cruzi, the causative agent of Chagas disease . In Brazil, 100 to 150 cases of Chagas disease are caused by contaminated food each year. During the dry season between July and December, there are also more chagas falls due to açaí berries. The droppings of predatory bugs are found on the berries and are eaten along with the pathogen. Permanent forms of T. cruzi survive on the plants for a long time in the faeces. In neighboring countries of Brazil, eating palm hearts has also resulted in Chagas infections.

Heating the berries or their pulp to over 43 ° C for 20 minutes is a safe and practicable method to prevent food- borne Chagas disease caused by Trypanosoma cruzei .

In addition to its use as food, the palm is also used commercially in other ways. The leaves are made into hats, mats, baskets and brooms and the wood is used as building material. Açaí oil can be obtained from the berries .